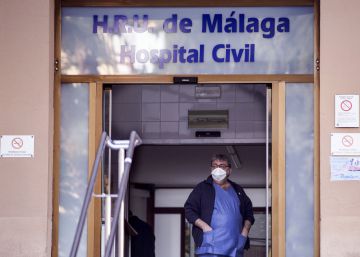 The emergence of the coronavirus in northern Italy has been felt strongly in Spanish health: “It is something that changes many things, the beginning of a new stage,” says Pere Godoy, president of the Spanish Society of Epidemiology. “Until now the criteria of suspicion of a patient were simple: having symptoms and having been in Hubei. Now it is urgent to reformulate them precisely and it will be somewhat complicated, because the situation in Italy changes rapidly and the ties between the two countries are huge, ”adds Godoy.

Those involved —infectologists, microbiologists, preventivists …— of the large hospitals spent a good part of the day on Monday focused on adapting to a situation that very few expected to change so much in such a short time. “The first thing now is to change the protocols and have contingency plans ready for what may come,” says Jesús Rodríguez Baño, head of the infectious diseases department at the Virgen Macarena hospital in Seville.

The contingency plans provide in detail issues such as “reinforce equipment, personnel protection measures, have the material ready, define emergency spaces for suspicious cases, reserve a plant for income …”. “It’s not something so different from what we do every year with the flu, but today we had to put everything in writing and review it,” adds Rodríguez Baño, also president of the European Society for Clinical Microbiology and Infectious Diseases.

More complicated is the reformulation of the protocols, something that all the experts consulted expected to be resolved on Monday after learning about the results of the meeting that the Advisory Council of the European Center for Disease Prevention and Control (ECDC) held at the Monday afternoon in Stockholm. But this committee, made up of members of the public health services of the EU countries, failed to agree on a definition of the clinical criteria that should be used to identify suspicious cases. “It is an issue that is still under discussion and that it will be reviewed again tomorrow or in the next few days, ”explained an ECDC source last night.

“We are waiting for the new protocols because the situation in Italy demands changes,” said Jesús Rodríguez Baño yesterday, of the Virgen Macarena hospital in Seville. Baño hoped that the ECDC advisory committee agreed yesterday a common criterion for case definition.

The ECDC has no executive functions or means to compel its recommendations, although governments do follow their criteria. “They do it in more than 95% and the small changes they apply are rather to adapt the recommendations to the local reality,” says Antoni Trilla, of the Barcelona Clinic.

For Antoni Trilla, head of the Preventive Medicine and Epidemiology Service of the Hospital Clínic de Barcelona, ​​”it is urgent” to resolve this point to properly manage the attention to suspicious cases in the coming days. “The definition of each case is the key tool. It tells us what symptoms and personal history (travel, contacts …) we must take into account to decide whether or not a patient is suspected of being infected by the virus and take all the appropriate measures, ”explains Trilla.

The news that the ECDC had failed to agree on a case definition yesterday caused some concern among all sources consulted. The fear is that this will delay the adoption of joint measures at European level in all hospitals that help prevent the virus from spreading beyond Italy. Even the Minister of Health, Salvador Illa, referred to “the meeting of experts” of the ECDC as a preliminary step for the ministry and autonomous communities to agree on a new one today.

Meanwhile, the hospitals were yesterday “adapting case by case and prudently” the protocol in force to date. “It is a protocol that has become old, that is no longer useful. You get a patient with fever who comes from Milan and what is the use of knowing if he has been in China or not, ”asks the head of service of another large hospital, who asks for anonymity.

Santiago Moreno, responsible for infectious diseases at the Ramón y Cajal hospital in Madrid, considers that “it is time to make firm and consensual decisions, because the virus is very close and we have few opportunities to contain it.”

The Canary Islands administer 95.18% of the more than 1.5 million vaccines received

The ex-partner of Juana Rivas opposes the pardon

Two companies with underwater robots volunteer to search for Anna