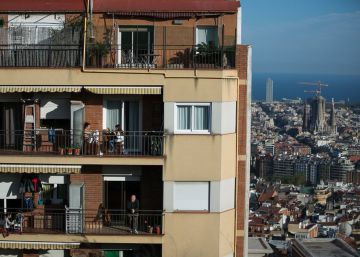 Sixth consecutive fall and fourth all-time low in a row so far this year. What until not long ago would have seemed impossible, is already common in the Euribor. The index to which almost all variable mortgages in Spain are referenced closes November at -0.48%, that is, two basis points less than the previous month, the lowest level of the entire series, in the absence of the data for this Monday. The consequence is the cheapening of both the new mortgage loans and the old ones whose revision is due now, since the variation with respect to the Euribor level of a year ago is negative. In the short term, experts do not see any rise, although in the middle, if the economic situation shows signs of a solid recovery, a stealthy comeback could begin.

The conditions that favor such a low price in the variable mortgage index have not disappeared from the map. “It was expected that the Euribor would rise in recent weeks given the recent optimism for the development of vaccines against covid Y better growth forecasts”Admits Joaquín Robles, analyst at the financial broker XTB. However, faced with a situation still dominated by the second wave of infections and with the aim of stimulating an economy very affected by the health crisis, “the European Central Bank (ECB) continues with its purchase of assets and its round of liquidity, offering very advantageous loans to banks,” emphasizes Robles. What results in an excess of liquidity for which there is not enough demand. In this way, by representing the interest rate at which banks lend money to each other, the Euribor reflects the consequent scarcity of operations in the interbank market.

Inflation as a signal

Of course, Robles believes that the index has already touched the ground, since the interest rate that banks pay to the ECB for depositing funds in their coffers is 0.50%. If the Euribor fell below this threshold, there would be the paradox that entities would disburse more to provide liquidity among themselves than to leave it in a place that offers them more guarantees, that is, the entity chaired by Christine Lagarde. An eventuality that, however, the director of Mortgages of iAhorro, Simone Colombelli, does not completely rule out, although he calls it “atypical”. In any case, “the recovery does not seem to be in the short term,” explains this expert, who foresees: “The Euribor may continue to be negative for three years, because although we are in a recovery context, the index will take longer to return to go up and change sign ”.

To determine the evolution of the Euribor, Robles suggests looking at inflation. “It is one of the most important parameters on which it is based the ECB’s monetary policy”, Says this financial analyst. In Europe it is at 0.3% and it is costing horrors to raise it around the European Commission’s target – that apparently unattainable 2% – despite the fact that, according to economic theory, the increase in the money supply should lead to inflationary pressure. But there is one of the keys. “The evolution of inflation in the short term can condition the monetary policy of the EU and, from there, the Euribor”, says Robles. On the contrary, if, as everything indicates, the ECB deepens its monetary policy, “we are going to see the Euribor trading near its historical lows, at least this end of the year and the beginning of the next one,” Robles predicts. Subsequently, if a progressive recovery begins, it is possible that the index “will gradually advance” towards the zero level, “but, of course, the forecast in the short term is a stagnation below -0.40%”.

Not only do variable mortgages enjoy low rates thanks to the low Euribor price, but the new war between banks to have the most competitive fixed mortgage loans offers an exceptionally favorable scenario for their clients. “In recent months we have observed how entities that previously did not have fixed rate mortgages, have now added them to their offer”, Colombelli highlights. This is the case of ING, EVO Banco and MyInvestor, among others.

The supply meets the demand, since in August the fixed mortgages that were contracted were almost the same number as the variables, according to the latest data from the INE. A sign that “users are looking at current fixed rates, more similar to the variables we saw in the market a few years ago, tranquility and stability, in a context of economic uncertainty”, interpreted from iAhorro.

“Although the end of the year is a period without great movements in commercial offers, the key is always in the negotiation to get the best conditions. Banks are also offering more bonuses that allow them to be even more competitive ”, emphasizes Colombelli. In this sense, subrogation —that is, the transfer of a mortgage from one entity to another— can be very interesting, since, in order to attract clients, the receiving bank will be willing to improve the original conditions of the loan. “If 10 years ago the average rate at which mortgages were signed was around 4%, it is now possible to get fixed rates at 1.5% and Euribor variables plus 0.75%”, explains Colombelli. “If we have bought a house in the last decade, we are facing a spectacular moment to surrogate”, He concludes.