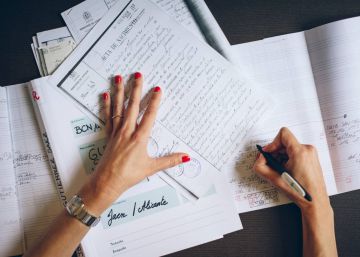 Stopping the process of searching or buying a home or moving forward is just one of the many dilemmas to which many people are facing since the government proclaimed a state of alarm, last Saturday. The irruption of the fight against the coronavirus epidemic, with routine disturbances This entails, has often caused the decision to park this vital change, according to professionals in the real estate sector. Other times, however, the future owner is determined to go all the way and he succeeds.

This is the case of a client of Tomás Pérez Ramos, notary in Madrid. “She wants to formalize the deed as soon as possible because she is eight months pregnant, she has a down payment contract whose expiration is approaching and she is very concerned that this will go further and that she will not be able to have the home by the time she gives birth,” says Pérez. . In cases like this, in which the urgent nature of the operation is appreciated, it will be possible to complete it, despite the exceptional situation in which the country is mired.

Not everyone will have the same luck. “We are alarmed”, admits Montse Junyent, head of the legal department of the Official College of Real Estate Agents (Coapi) of Barcelona. Although it is too early to draw a balance, Junyent calculates that this week, in the first working days of applying the state of alarm, the forced closure of real estate agencies has caused the paralysis of more than 60% of the planned sales only in Catalonia . For now, “the future is full of uncertainty only,” he adds.

“They will have to wait for him to get up,” answers Junyent, resigned, to the question about what can all do, before the approval of the royal decree establishing the alarm status, they were still looking for a home and had not taken the long road to buying and selling. The forced closure of all non-essential commercial activities, such as real estate, makes it impossible to organize visits to the properties. And, even if you do not go through an agency and contact the seller directly, it would be unfeasible for the potential buyer to claim the intention of visiting a home such as one of the reasons of proven need that empower citizens to circulate on public roads.

Virtual tours remain, for which some agencies are already prepared. “We have tools with which to provide the client with a lot of information, so that when the state of alarm ceases, they are able to visit the house and make a firm decision,” explains the owner of the Eurofincas real estate agency, Ramón Riera. “On Monday no email came from our platform on-line to ask about homes for sale, “he confesses. Everyone held their breath. The next day, however, “things started to cheer up a bit.” Riera clings to the possibility of continuing to offer her advisory services by phone or via the internet. We will have to see if the demand holds, from the confinement you will be in until the end of this month, as long as the alarm status does not extend beyond the 15 days initially planned.

Meanwhile, traffic on the real estate ads website Pisos.com has decreased these days by 10%, according to the firm’s chief of studies, Ferrán Font. “The potential buyer will have to wait a few weeks, and accept it, but we encourage agencies to continue showing their offers online, especially since it is the only means through which they can do so today,” he adds. In Font’s opinion, the user has the opportunity to take advantage of this downtime to continue looking and meditating more on his decision.

But if the user had already signed a purchase promise with the seller and wanted to finance the operation through a loan, they should quickly find a mortgage. Despite the fact that banks are authorized to open their offices to the public, with the circulation limitations in force, it seems difficult to go to various entities to find out their offers and negotiate. The existence of bank comparators and intermediaries on-line makes the task easier. But from one of them, iAhorro, they warn that some banks are suspending the mortgage campaigns they had planned.

“If the hiatus lasted a month, the impact on the sector may be similar to what it had the entry into force of the Real Estate Credit Law, in June“Estimates the comparator’s mortgage director, Simone Colombelli,” but if it lasted two months or more, the consequences could be much more serious. ” In his words, entities could then apply a higher default risk to users or, what is the same, make mortgages more expensive.

In any case, to obtain a mortgage loan it is essential to have the appraisal of the house to be purchased. And also this act, if it had not yet occurred, will have to be postponed, because it must be carried out by a professional in person.

But those who will be in a hurry will be the ones who have signed a down payment contract whose expiration is when falling. If they do not formalize the sale, the potential buyers will lose the signal. “I understand that, with the suspension of all procedural and administrative terms and in all jurisdictional orders established by the royal decree, the terms in private contracts should also have been suspended,” says Pérez.

However, in the face of an unprecedented situation such as the proclamation of the state of alarm and the doubts it raises, this notary advises to act. “If I were immersed in a purchase process, instead of waiting for the interpretation of whether or not the deadline that we had given in the deposit agreement was suspended, I would extend it through a private document that I would sign with the seller before the expiration date comes, “he recommends. An act for which it is not necessary to go to the notary.

Of course, once all these stages are closed – search, promise of purchase, appraisal, down payment and mortgage – the formalization of the deed before the notary would be essential to dispose of the property. An obstacle that is rarely possible to overcome in an alarm state. It is true that an instruction issued by the General Directorate of Legal Security and Public Faith clarifies that the notary cannot close his office, as it is a public office. However, given the restrictions on freedom of movement in force, “it will only be compulsory to attend to those urgent actions”, it reads. The notary will then be the one to evaluate each case and determine if it cannot be postponed.

Not go to the notary

From the General Council of Notaries, they insist that the client should not appear in the office, but rather call his notary or the one closest to him by telephone. Only after having presented the case to him and if it were urgent, the notary will summon the interested parties (in the case of a home purchase with a mortgage: the seller, the buyer and a representative of the bank), who must appear at the office ” with those means of self-protection that guarantee health security ”and respecting the separation and physical separation measures recommended by the authorities.

According to Pérez, being summoned in a notary is a reason of proven need that justifies the fact of driving on public roads. Even so, these days some clients have asked him to issue a document that confirms it, as a safe-conduct. The first days of this week, in the reduced hours with which he opens his office, Pérez only formalized the occasional will and some powers. “About 70% of the scheduled writings have been postponed and I suppose that next week we will do only 10% of the usual activity,” he predicts.