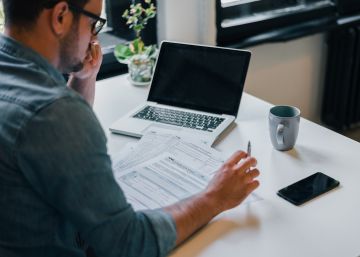 The situation in the Spanish self-employed organizations is the same: the telephones do not stop ringing and the mail inboxes are full. Questions and more questions. Lots of doubts. “We have attended 48,000 consultations in three weeks, when our annual average is around 10,000-15,000,” José José Perea, general secretary of the Association of Autonomous Workers (ATA), indicates by way of example.

It is not for less. Many questions are related to the aid offered to the group by the autonomous communities, the second containment dam and aid for the self-employed after the national contingency plan. According to Eduardo Abad, president of the Union of Professionals and Self-Employed Workers (UPTA), there are 1.3 million self-employed workers who are living a tremendously delicate situation and who have not been able to meet the state requirements to qualify for the cessation benefit. activity, which requires a decrease of 75% in turnover.

José Luis Perea, general secretary of the Association of Autonomous Workers (ATA), highlights that “most of the communities have set their batteries and have shown sensitivity. Some are slower than others and some have not yet taken any steps, but all work in the line of helping ”.

According to Eduardo Abad, “there are communities that compulsorily establish a documentary burden to perceive the aid that necessarily requires having skill in the field of digitization.” This circumstance, although it is favorable in the current moments of sanitary emergency, also has its drawbacks. All the processing is carried out through the Internet and a large part of the aid is valid until the budget is exhausted.

For the benefit of taxpayers, all communities have extended the deadlines for filing taxes such as Successions, Property Transmissions and Documented Legal Acts, among others, and many – although not all – have implemented direct support measures for the self-employed to Lost fund. These are the actions that the communities are implementing:

Andalusia. A total of 50 million for the self-employed who do not receive other aid or allowance for cessation of activity and whose annual income does not exceed 39,000 euros. The aid will be 300 euros per petitioner and the application period is extended until the budget is exhausted. In addition, the Board has approved rental aid of up to 900 euros for the self-employed person who has seen his income decrease by 40%. They can be requested in early June.

Asturias. 400 euros so that the self-employed who have closed and do not exceed 30,000 euros of net yield cover fixed expenses such as rent, mortgages, electricity, water, fuel or telephone. They must remain discharged for six months after the alarm state ends. The deadline to ask for help is May 13. Likewise, the Principality offers rental aid to self-employed workers who have ceased their activity, up to a maximum of 500 euros, and which will cover the monthly payments from April to September.

Canary Islands. Line of 11 million euros to cover 30% of the extraordinary benefit for cessation of activity. With this 70% supplement that is borne by the State, the Canarian autonomous will charge one hundred percent of the benefit.

Cantabria. The so-called “resistance check”, for freelancers who have suspended activities and do not exceed two million euros of annual turnover, is divided into three fixed amounts. Micro-enterprises with a single worker opt for 150 euros a week; 225 euros if the business has between 2 and 5 employees, and 300 euros for the self-employed with between 6 and 9 workers. Valid until the end of the state of alarm or until the end of the assigned game, of 10 million euros.

Castilla la Mancha. Proposal in the project phase. It will inject 25 million euros for self-employed workers and SMEs with less than ten workers to cover priority expenses, on the condition that they resume activity after the state of alarm.

Castilla y León. “Flat rate” of 60 euros for the Social Security contributions of the self-employed during a period of six months. Those who have ceased their activity will receive 40% of the quota for the first three months and there will be grants of 427 euros per month for six months to the self-employed who have ceased their activity and are not entitled to any benefit. There will also be subsidies of up to 10,000 euros to workers who have lost their jobs and decide to start. They cannot be requested yet.

Catalonia. 2,000 euros as the maximum amount for the self-employed person whose income has been drastically cut and whose tax base of his last income statement is less than 25,000 euros in case of individual taxation. Applicable until May 5, 2020.

Madrid’s community. He has implemented various aids in the form of a rescue plan. The first, through the Impulsa Program, with five million euros for self-employed people in difficulties and without dependent employees, was sold out in 72 hours. Workers could receive up to 3,200 euros, equivalent to 12 monthly payments of the minimum contribution base to Social Security. This plan has been endowed with another 12 million more but has not yet materialized. Another measure of the CAM of direct support to the self-employed is the payment of quotas for March and April, provided they show that their turnover has fallen by 30%. The initiative, endowed with 38 million euros, is part of the so-called Continuous Plan. About 70,000 freelancers will be able to collect 534.50 euros, equivalent to the minimum contribution of two months. The deadline to apply for aid closes on May 17.

Valencian Community. It supports its freelancers with amounts of between 750 and 1,500 euros until next May 5. The highest sum, for those who have interrupted their activity. The lowest, for those who have invoiced 75% less. Self-employed workers with net returns above 30,000 euros last year are excluded.

Melilla. In draft phase. Ten million euros to be distributed among the self-employed and SMEs that have ceased their activity or that show a great impact on their accounts. The maximum amount will be 1,441 euros, to which another 360 euros per employee worker will be added. The self-employed who apply for the aid must not have invoiced more than 60,000 euros in 2019.

Navarre. They still cannot be processed. The regional government has implemented two types of aid. The self-employed persons who have ceased activity and whose income does not exceed 2,151 euros may receive an income of 2,200 euros, as long as they remain active for at least one year. Secondly, it has designed an income of 700-800 euros for those who have not accepted the cessation of activity but who have seen their billing cut by at least 30% compared to the previous semester.

Basque Country. 3 million euros have been budgeted to offer aid of up to 3,000 euros to the self-employed in cessation of activity and whose activities have been suspended. The grant, Until September 30, you can focus on paying the Social Security fee or renting the premises. The self-employed person must continue the activity at least four months from the end of the alarm state.

The aid scenario, at the national level, consists of a package of measures adopted after the declaration of the state of alarm. Among the most important is the extraordinary benefit for cessation of activity for the self-employed forced to suspend activities and also for those who, working, have seen their turnover reduced by 75%. This benefit will be equivalent to 70% of the contribution base of the last six months.

In addition, the self-employed infected by the covid-19 will be able to collect the benefit for sick leave, which implies receiving 75% of the contribution base of the previous month from the first day of sick leave, considering the contagion as an occupational accident and not as common disease, assumption in which only 60% of the base is charged and, in addition, from the fourth day of sick leave. Finally, self-employed workers can also postpone their April, May and June obligations with Social Security without surcharges or interest. Also, the debts of those months are deferrable, with 0.5% interest.

On the other hand, on Wednesday, April 22, a moratorium on rental of business premises was approved in the BOE, the rescue of pension plans for the self-employed was made more flexible and some fiscal measures were adopted for the benefit of self-employed workers that they pay for the module system.