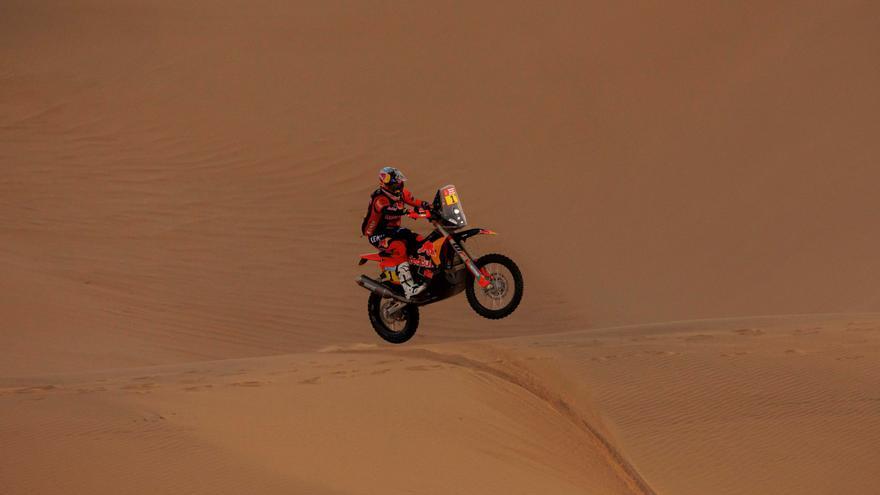 The Chilean Nacho Cornejo (Honda) achieved his second stage victory of the Dakar 2022 after winning the ninth, with the start and finish in Wadi Ad Dawasir, being the fastest in the last 100 kilometers of the special stage, in which the British Sam Sunderland (Gas Gas) lost the lead of the motorcycle general in favor of the Austrian Matthias Walkner (KTM).

Argentine Kevin Benavides was second (KTM). The current champion on two wheels finished 1'26 ”behind Cornejo, which serves to cut slightly in the general; standing 10'22 ”from revalidating his trophy. For his part, American Ricky Brabec (Honda), who dominated the first half of the special, completed the motorcycle podium, but it is not enough for him to get close in the general standings since he only surpassed the new leader by 19 ”.

A fourth place for Walkner that serves him for take back the place of honor from the British Sam Sunderland (Gas Gas). He opened the track and left 8'3 ”compared to Cornejo, but he will start tomorrow Wednesday from a good position for the longest special of the remainder of Dakar -374 kilometers- and which will be marked by navigation.

The 287 km of this Tuesday were once again a demonstration of overcoming for the Spanish Joan Barreda. Despite the fact that the fall he suffered this Monday caused the pain in his clavicle to increase, which he has fractured from the fifth stage, Honda's was always in the top positions until he finished fifth at 2'10 ”behind Cornejo. Resisting the intense pain that even, as he revealed when he arrived at the camp after the eighth stage, has made him pilot with one hand, he places himself 10'57 ”behind the leader of the general classification.