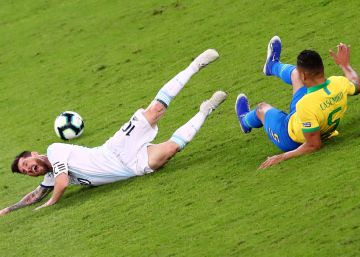 Many times criticized for his silence, chronic in Barcelona, ​​Lionel Messi served as spokesman for Argentina throughout the Copa America. From start to finish, the captain of the Albiceleste spoke in all the mixed zones of Brazil. In bad, as in the defeat against Colombia (0-2); in the regular ones, as against Paraguay; and in the good as in victories against Qatar and Venezuela, both 2-0. But he did not want to say goodbye to the Cup without leaving a message to Conmebol. "They tipped us a lot," he said. "And he continued:" The people of Conmebol are going to have to do something. In this cup they got tired of charging boludeces: hands, penalties assholes and here they did not go to watch the VAR. They were two clear penalties that did not charge us. For us, they were all cards and nothing for them. They are plays that are unsettling and take you out of the game. The referee was not fair. "

Messi could not contain the anger in the Mineirao. "I hope the Conmebol does something, although I do not think it will do anything because Brazil manages everything. It's very complicated". The players from Argentina complained about two supposed penalties that the Ecuadorian referee Zambrano did not sanction. One to Kun Agüero in a clash with Dani Alves and another of Arthur to Otamendi, which ended in the second goal of Brazil. "I agree with Messi, it seemed to me that the referee was more nervous than us", added Dani Alves. "The VAR worked very well until today (this Wednesday) I felt the blow of Dani Alves, I do not know why motive was not reviewed because they had explained to us before the Cup that he was going to play in the decisive plays, "Aguero complained, and Argentina coach Lionel Scaloni finished off:" The referee conditioned the game. "

Scaloni, however, sought to highlight the work of his team. "Brazil was submitted by Argentina in some moments. It is the best match we made in this Cup because of the magnitude of the opponent and what we created. We played a full game, but it did not work for the classification. It was a merit of ours that they have to play against. We felt that we were superior, but playing the final was the important thing and we could not do it ", analyzed the coach of the Albiceleste. Argentina started the Copa América with many doubts in the defeat against Colombia, but left certainties in the fall against Brazil. "There are times when football is unfair. If it was by merit, it should have happened Argentina. We won possession and I do not know if a team attacked them so much. Likewise, what counts is the result, "Scaloni completed.

"We have to be calm because there is a future. The boys showed that they are up to the task. Something new started. We have to give time, "said Messi. Barca 10 said he will remain committed to the selection. "Messi is an extraterrestrial," praised Tite, the Brazilian coach, to the captain of Argentina. "I value reaching the final after a great match like the one we played. A meeting between two teams with great technical resources, "concluded the Canarinha coach.