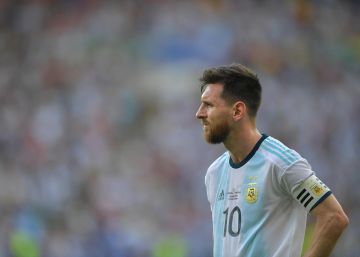 Brazil has lived a cyclothymic period since Belgium knocked Russia out of 2018 in the quarterfinals. Tite came to the World Cup as the coach who had rescued the fine palate of the Canarinha and went in shadows, with the identity shivering and with Neymar away from the ball. Nothing seems to have changed in the Copa América. It changes good for bad, without convincing against Bolivia (3-0) or Venezuela (0-0), overwhelming against Peru (5-0), saved by Alisson in the timba of the penalties against Paraguay (0-0, 4 -3). But if the World Cup left Brazil to grind, Argentina threw it to the canvas, out in the second round against France.

The Copa América seemed to finally dynamite Argentine football, but for those things that only football can explain, the Albiceleste, which had lost to Colombia (0-2) and tied against Paraguay, settled (without much luxury) against Qatar ( 2-0) and Venezuela (2-0). Merit enough to measure the state of mind of Brazil in the semifinals against Brazil (early morning of Tuesday to Wednesday at 2.30, Dazn) in the Mineirao stadium, in search of a place in the Maracana final -Chile and Peru dispute the other crossing the next day-.

If Brazil ran out of Neymar, Argentina is looking for Messi. "It's not being my best tournament," says the 10th, who is aiming for his fourth final in America, after losing the 2007, 2015 and 2016, the first one against Brazil, the other two against Chile on penalties, in addition to the final of the 2014 World Cup. Few question the supremacy of the Canarinha as the Albiceleste (42 wins for Brazil, 38 for Argentina and 25 draws). The problem for the current Scaloni team is that he could never win an official match on the enemy's land and he has not won for five games. And while Tite is already clear on the eleven, Scaloni hesitates to keep his three forwards (Messi, Agüero and Lautaro) or protect himself with four ruffles in the superclásico of America.

The two teams are on the couch. Argentina because they have not tried a title since 1993, Brazil because they do not forget that in that stadium Mineirao suffered the humiliation of the 1-7 against Germany in the semifinals of the 2014 World Cup.

Brazil-Argentina is the most repeated duel in the history of the Copa América: they have met in this tournament 32 times (15 wins for the Albiceleste, nine for the Canarinha and eight draws). However, Argentina and Brazil were not born in opposition. At first, they were even ignored. It was the Canarinha, in fact, the one that ignored the Albiceleste. A snub that irritated the Argentines. The truth was (or is) that the power of Brazil had the admiration of the world while Argentina was in a riffraff with Uruguay to see who was the capo in the Rio de la Plata. The great rival of the Verdeamarela was Uruguay. Until something changed after the World Cup 78. Argentina, finally, had sewn the star in the chest and appeared Maradona to put in jaqué the crown of Pelé.

The mediatic fight between Maradona and Pele put more seasonings to Brazil-Argentina when the Pelusa lifted the cup in Mexico and four years later made a memorable move in the eighth-finals of Italy 90 for Caniggia to beat Taffarel. "Diego gambeteó, the Cani vaccinated you, you are crying from Italy until today," the Argentine parish sings. "Maradona cheirador", the crooked one replies. A relatively new dispute, which definitely seems eternal. Today is classic of the classics in South America, regional rivalry, also sharpened in recent years when the Uruguayan teams stayed in the background in the Copa Libertadores. Argentina has 25, Brazil 18 and Uruguay eight (the last one in 1988).

"I've played many classics: Madrid-Barça, Nacional-Peñarol, Hamburg-Werder Bremen …", says Ze Roberto; "none like Brazil-Argentina". "Winning is nice, beating Argentina, more," says Dunga. And Roberto Ayala finishes: "In the end, football is rivalry, and there is none like Argentina-Brazil." Pelé debuted with the Scratch shirt against Argentina in 1957 (scored a goal, of course), Maradona was poisoned from the Sarrià Stadium in 1982 and Messi has scored four goals for Canarinha (the top scorer of the classic is Pelé with eight), all in friendly matches. La Pulga will seek to awaken, once and for all, the Copa América and thus rekindle the ghost of Mineirao.