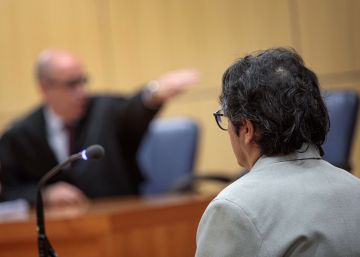 The Valencia Court has sentenced L. Eduardo RI, educator of a religious reception center, private but with places arranged with the Administration, for five years in prison for a continued crime of sexual abuse of a minor protected by the Generalitat in certain periods between 2016 and 2017, when she was 14 years old. The room, which imposes the petition claimed by the prosecutor, also prohibits him from approaching her or his home within 200 meters or communicating with her for 10 years.

The defendant worked in the center, ruled by nuns and located in Valencia, as an educator, and, according to the court, in that period of time, taking advantage of the fact that he was on the night shift, went to the room where the child slept, in an isolated way to be punished for bad behavior, and massaged the neck area at the request of the girl, who had difficulty falling asleep. Once he thought she was asleep, he took her hand and masturbated with her.

The sentence states that the defendant "maintained on the date of the events a relationship of kinship with a high position of the Generalitat, something that was known to everyone in the center, which represented for the minor an added difficulty when formulating the complaint before the fear that it would not be believed. " The damned She was Monica Oltra's husband, Current Vice President of the Generalitat and Minister of Equality and Social Inclusion, competent in the field. The couple had separated months before the events happened, according to sources close to the leader of Compromís.

The court maintains that the facts have been proven by the statement of the victim, of two police officers, of an expert witness and of other statements that would corroborate the abuses to enervate the presumption of innocence "beyond any reasonable doubt." The sentence emphasizes that the child had been in contact with the institutions since the age of four and declared homeless since the age of 14.

The magistrates discard spurious motives or resentment of the minor towards the accused or any type of personal or psychological alteration in her that throws doubts about her credibility, something that corroborated a report of the Institute of Legal Medicine. The judges emphasize that the procedure was initiated by a complaint by the prosecutor before the girl's reluctance to do so. In addition, he points out that when the girl's boyfriend finally knows the facts about her, he will ask the educator for explanations and his reaction to such a serious accusation was not to deny the facts in a vehement way.

Regarding his testimony, the sentence considers that it is plausible, because it is consistent and reinforced by peripheral corroborations such as the statement of police officers, the boyfriend of the child, a friend in the center and another caregiver. The room also focuses on the admission of the defendant that he massaged the girl when requested, a fact that he considers "absolutely unusual" and which would abound the statement of another educator who precisely said it was not usual.

The Hearing concludes as facts that contribute to making the accusation credible the following: that the child slept apart; that the accused had the opportunity to commit the abuses; the statement of the other educator; and that she didn't react because she stayed in a state of shock and I thought nobody would believe her.

Surprisingly, the educator has continued to work in the same private center, after reporting the facts, as no preventive measures have been issued. At first, the center opened an internal investigation during which the convict was removed from work. Later, he returned to the center, but was located on a different floor.

These circumstances centered the entire press conference of Monica Oltra after the Governing Council on November 8, one day after the conclusion of her ex-husband's trial. The Vice President of the Consell responded to journalists that the Generalitat cannot remove a worker from a private center from his job without there being a conviction or any precautionary measure that so orders, even if he is accused or there are suspicions of alleged sexual abuse .

Oltra added that "when the centers are not public, the Ministry cannot act. It is the problem of having a mostly privatized child protection system, of not having practically public management centers." "When this happens in a public center, the Generalitat can, with the consent of the worker if he has the place, transfer him to another destination, but when he passes in a privatized center the personnel management does not depend on the Ministry," he explained.

Asked about the actions of the Ministry of Equality in this specific case, Oltra said that, after suspecting the educator's action, the center itself alerted the territorial management, which put a psychologist in the case to evaluate the child. The Generalitat ordered the transfer of the adolescent to another center, although finally it did not occur because judicially her admission to other units was ruled because the girl had other causes pending (for theft).

Oltra said that, after knowing the facts in September 2017, the Ministry of Equality, "after analyzing the protocol in force in these cases, sent an instruction to all the centers in which it was ordered to immediately inform the Juvenile Prosecutor and the management territorial before any suspicion ". "The instruction emphasized informing the Prosecutor's Office because it is up to them to assess the possible precautionary actions and other measures," he added.

In the Ministry of Equality and Inclusive Policies they have indicated to this newspaper that the protocol of action is marked by the Law of the Minor. As soon as there is knowledge or suspicion of abuse, the center must notify the Juvenile Prosecutor to act. Now, they insist, the protocol has been extended, and it has to be communicated automatically to both the Prosecutor's Office and the Ministry, whether the public or private center, without delay.

In the sentence, the Hearing also questions the conditions in which the child declared in the trial when being handcuffed and guarded by agents, who refused to remove the handles. In this way, they understand that there was a "new victimization of the girl, with a clear violation of her rights to receive support, assistance and respectful treatment by all authorities and officials throughout the criminal process, as well as her dignity and due assistance, in violation of the provisions contained "in the Law on the Statute of the Victim of Crime. The police explained that the child had a history of leaks and had expressed her intention to do so again.

In addition, the court is struck that the director of the center did not ask the child about the facts once she knew them. The responsible knew what was happening by a call from the entity that managed the money that the child received from the father, imprisoned. The director only asked the child for the reasons she wanted to leave the center. The sentence also criticizes a psychologist from the Minor Section of the Territorial Directorate of the Ministry of Equality who did not do so either. The Ministry explains that the first psychologist to attend her was not a specialist and then was referred to a specialist.

"It is surprising that they not only did not ask the girl about the alleged abuses but also that she did not realize the Prosecutor's Office for Minors," said the ruling.

What happens if I catch a regrowth away from home and on vacation?