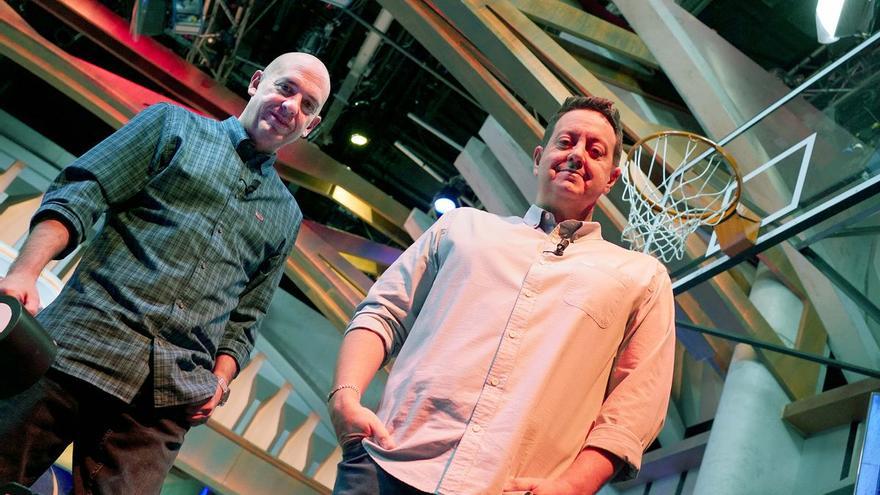 The NBA returns to normal with post-pandemic symptoms. For Daimiel, “it is thought that athletes have a vacation worthy of the Austrian kings, but they had less rest between one season and another. That caused teams to sacrifice less on defense. And now he has suddenly taken a turn many years ago: more defense, more arbitration permissiveness. Older people like that, but the NBA, for marketing purposes, wants it to be showy ”.

Passing, sharing the ball … is it playing well?
The masterclass of @ADaimiel in La Clave. #NBA Generation pic.twitter.com/NWnp3wasNC

Guille categorically states that “we are witnessing the greatest explosion of young talent in the history of the NBA. Any kid has a bright future. I’m amazed, especially with outside players ”. Much gamer? “Much gamer and much freak out”, He points out. Daimiel comes out to help: “There are gamers freak out and freak out that they are not gamers. There is a group of exteriors of less than 25 tremendous. Morant, Alexander, Trae Young, Doncic .. LThen there are veterans like Lebron or Curry… And there is a phenomenon to study: Europeans do not see a great player as Antetokounmpo, which seriously threatens Nowitzki as the best European product ”.

Interview with Antoni Daimiel and Guille Giménez, presenters of the NBA program on Movistar +. MOVISTAR +

It is time to talk about Spaniards and Antoni makes a disturbing reflection: “With the march of Pau and Marc reverts to normal terms for Spain. It was an excess, in the best sense, to have such important players in the NBA. By population and sports culture it did not correspond to us. You have to avoid going completely to nothing. Basketball is important here, with many licenses and great coaches, but it seems that it will cost to export players to the NBA in the coming years. France seems to have a more powerful generation ”.

Reviewing names, Giménez points out the one of Santi Aldama. “I am so curious. He is a Spanish player different from what has come there from Spain. A 2.11 guy with a good hand, he moves well … and let’s see if Ricky Rubio He punches and becomes a more valued point guard, because he already is one of the best. For me he is a starter in a candidate for the ring ”. Daimiel adds that “he has had very bad luck. On Utah he was fine and suddenly he was dispensed with. Neither he nor many of us understood it. He went to Phoenix, a young team, and led its evolution. But he got within range Chris paul and goodbye to Ricky. That emotionally affected him. He hardly goes to the Games, and in the end he finished in the best quintet and with tremendous performances. When the season started it came to me that I was happy in Cleveland and it is showing. I think they will have a good season and he will be the protagonist. I wouldn’t be surprised if it ended up in a wannabe like Clippers or Philadelphia”.

It’s Ricky Rubio talking about his path, the path of life, after signing his best touchdown in his entire NBA career

The NBA seems like a chessboard moved by its leaders to generate new scenarios. Now we are in the era of “Super Teams”. Guille begins by opening his mouth with the Lakers. “Where are you going Westbrook grass does not grow. I never thought that Lebron I would bet on him because he likes to surround himself with less individualistic people, more pure shooters ”. “Lebron must know something that the rest of us don’t, but it’s hard to see that it will work out well. It’s a great song. It will be the soap opera of the season ”, adds Antoni.

Daimiel takes up the subject. “There are many people since Durant to Warriors who thinks the NBA controls everything. Lebron to the Lakers, the Nets, teams with Big 3 or Big 4… The Warriors had already won rings before Durant. And it is true that Lebron transcends times and the stars generate an attraction effect. But Milwaukee drafted to Anteto and caught Middleton as a waste of Detroit. Toronto caught a Leonard with doubts due to injuries, Marc arrived in the middle of the year and Lorry had been there for years …. I’m a traditionalist at this and I like teams made through the draft. It’s healthy that checkbook teams don’t do well ”. Guille adds: “In the Warriors-Cavs finals with Durant, people thought that PSG were the Warriors, and actually they were the Cavs, with the most expensive quintet in history. Now everyone is from the Warriors. ” And Antoni adds, “is that the Warriors were made through the draft: Curry, Klay, Draymond… ”.

The Warriors seem to be from another planet again. #NewsLet’s go pic.twitter.com/OPWMQMekj4

Precisely the Warriors are running as candidates according to Giménez: “They have made a full-fledged 2nd unit with Porter, Bjelica, Pole or Curry’s brother-in-law, Damion Lee. If they come back well Klay and Wiseman they aspire to everything ”. For Daimiel, “they have the most difficult thing: a successful model with 5 finals and 3 titles, an undervalued coach like Kerr and stability. They are aspirants in a West without so many candidates. Must see Denver, Utah, if the Lakers add up … “.

Now is the time for recommendations. Guille begins with “Miami. They have great players and they play very well as a team ”. Antoni points to “the Cavs, with a triple post that is not even seen in the FIBA! They defend in the zone and you have to squeeze the best Ricky. Also, my Wizards this year they are fun ”. Giménez closes with “Bland Morant. We interviewed him and he answered everything in monosyllables, but on the court it is a scandal ”. Daimiel nods with a smile.

Interview with Guille Giménez and Antoni Daimiel, presenters of the NBA program on Movistar +. DAVID CASTRO

It’s time to record NBA Generation, “this year more focused on fun, with more humor, to have a laugh. Deferred consumption without going so close to the present ”. Thus ends the conversation with Guille and Antoni, the culprits of our sleepless nights.