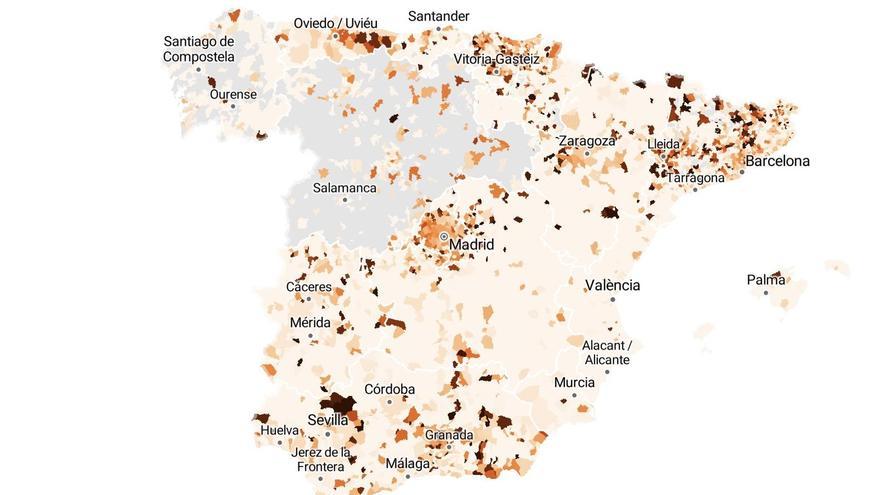 * Information updated with the latest data available as of March 23

The fall of the third wave reached its bottom in Spain with an incidence of 127 cases in 14 days and the first upsurges in cases are already beginning to be detected in several communities. Infections are on the rise again in a large number of localities where a significant increase in cases has already been detected in the last two weeks and the increase in transmission already affects 46 large cities – one in four. In addition, the descent of the curve is slowed in another forty cities, including the capitals Madrid and Barcelona.

The rebound in infections is notable in towns such as Arona (+ 265% of cases in 14 days), Badajoz (+ 251%), Santa Lucía de Tirajana (+ 218%), Rincón de la Victoria (+ 177%) and Cáceres ( + 134%). The highest increases are concentrated in the Canary Islands, Catalonia, Extremadura, Euskadi and Navarra, where cases rise again in many municipalities, according to the analysis carried out by elDiario.es based on data from the Health Councils of 17 autonomous communities and cities. autonomous communities of Ceuta and Melilla. You can read more details about obtaining this data in the methodology.

Even so, the figures remain far from the skyrocketing incidents that had been registered at the end of January. Only 1% of the population, who reside in just over 250 municipalities, live in locations above the threshold of 500 cases. The only large city that registers these levels of transmission is Melilla.

Despite the decrease registered in recent weeks, a part of the territory reaches the change in the general trend in extreme risk levels: 10% of the population lives in municipalities that register more than 250 cases per 100,000 inhabitants in 14 days, the level that the Health traffic light qualifies as extreme risk. Among them, 21 cities with more than 40,000 inhabitants. The ranking of large municipalities with more cases in two weeks is led by Melilla, Vic (Barcelona), Lleida, Santurtzi (Bizkaia) and Santa Cruz de Tenerife.

Expanding the focus, the positive trend of the coronavirus curve is no longer the rule that characterizes most of the territory. Confirmed cases of COVID-19 are already only in decline 📉 in 743 municipalities where 40% of the Spanish population lives (last week it was 67%). On the contrary, they are increasing 📈in 563 municipalities where 21% of the population lives and are in the plateau phase (they remain more or less the same as two weeks ago) in 113, where 24% live. The rest are very small municipalities where very few cases are registered – less than 5 every two weeks – or for which there is no information available – representing 14% of the Spanish population.

This week, 27 million Spaniards – more than half the population – continue below the high risk thresholds in the pandemic, when transmission is uncontrolled. Specifically, 4,800 municipalities register less than 150 cases per 100,000 inhabitants in 14 days, the threshold that Health considers of “medium” risk.

It must be taken into account that the data from the communities are not always homogeneous with each other due to the type of tests they include, the dates on which their figures are updated or due to changes in the publication of the data in the same month. The update date of each community depends on each one of them: most keep their figures updated weekly but some are delayed when updating their figures.

In total, the figures collected add up to more than two million cases of coronavirus in which the municipality of residence of the infected person has been identified. Of the 17 autonomous regions analyzed, Madrid is the city with the most infected detected in a single municipality. However, the municipalities with the highest incidence rate (cases per 100,000 inhabitants) are small localities in which an outbreak can affect a larger proportion of the population.