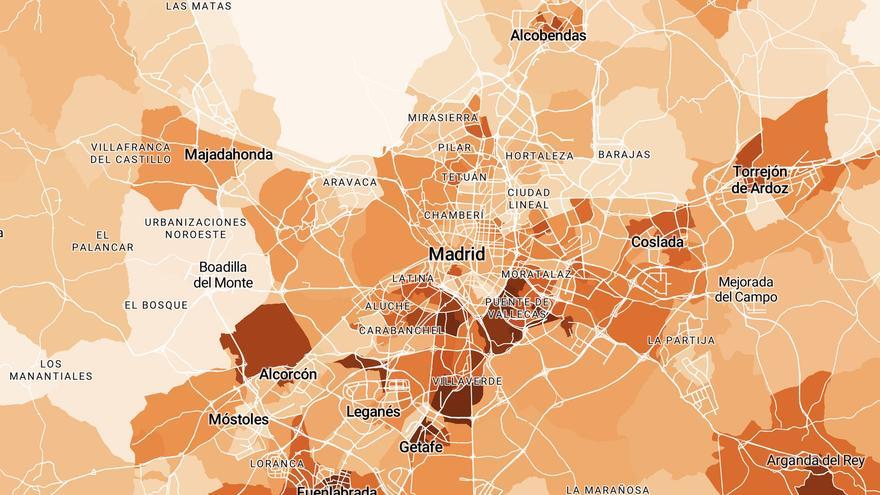 The incidence of COVID-19 falls in more than half of the health areas of the Community of Madrid. Specifically, the number of cases in 14 days per 100,000 inhabitants drops more than 10% in 169 of the 286 health areas (59% of the areas) compared to the figures registered two weeks ago, according to data published by the Regional executive 12 hours later than usual for the second consecutive week. Although all the available indicators indicate that the epidemic curve is flattening in Madrid, it must be taken into account that a part of these decreases may be artificial because the Community of Madrid calculates the latest incidence data in basic health areas with 9,000 cases less than those that the Community of Madrid itself has notified to Health.

According to the latest report published by the Ministry, with the data provided by the regional executive, Madrid registered more than 47,000 cases in the last 14 days. The figures by municipality and by health area published yesterday by the Ayuso Government add up to 38,250 cases for the same period: a difference of 20% between both figures. Even with these underestimated data, the incidence of infections per inhabitant in the Community of Madrid continues to lead in Spain and in most large cities, including the capital, there are more than 500 cases per 100,000 inhabitants, the threshold set by the Ministry to establish restrictions.

In this way, the data by health zones and municipalities published by Madrid on Tuesday are more similar to those that had been notified to the Ministry of Health on Monday, which apparently included significant delays in the notification of infections. In the report published that day, the Community had counted 39,090 cases in the last 14 days. The following day, the same report raised that figure to 47,329 cases.

As confirmed by Elena Andradas, general director of Public Health of Madrid, the data of the figures by municipality and health zone “correspond to the epidemiological week that ends on October 4.” That is, the figures published in the weekly reports of the regional government, dated October 6, refer to the late figures provided two days ago.

Is it common for this difference to exist between the data by municipalities of the Community of Madrid and the figures published on the same day by Health? Yes, but this is the first time that the difference exceeds 9,000 cases of difference. That is, although the incidence data of the Ministry indicate that infections are decreasing in Madrid, the figures by health zones accentuate this reduction in cases much more.

The data indicates that the outbreak of Covid-19 cases is decreasing in the Community of Madrid. For the first time since the beginning of September, the indicator of cases reported in the last 7 days falls below 3,200 daily infections in a week. The trend is repeated if we analyze the incidence of cases in 14 days or the cases diagnosed in 7 days by the Community of Madrid. In all of them it is shown how contagions decrease (with some ups and downs due to the delays) compared to the previous weeks.

Could this fall in contagions be a mirage? Although there is the possibility that the delays in the Community of Madrid in communicating their cases explain part of this drop (especially in the data for Monday), other indicators are already beginning to show an improvement in the situation: the number of hospitalized patients with suspicion or confirmation of COVID-19, it has decreased by 7% in the last week and the percentage of positive tests has also dropped (a sign that more cases are not escaping than before).

In practically all the areas where the restrictions began 2 weeks ago, the number of cases has also fallen, although the trend is repeated in the rest of the Community areas.

By districts, Puente de Vallecas, Usera and Villaverde, the southern neighborhoods, continue to be the neighborhoods of the capital with the highest incidence of cases in this second wave. As published by elDiario.es, economic inequality is also repeated at the different speeds of the virus in this outbreak of cases in Madrid. The districts and municipalities with the most cases registered per inhabitant are also those with the lowest average income per household.

The expansion of the coronavirus has been concentrated in the poorest areas of Madrid, where the highest rates of temporary employment, population density and overcrowding in homes are registered. The latest data published by the Community reflect that Barajas is the district with the lowest incidence of the virus in the last two weeks.

Even with this drop, Madrid continues to be the epicenter of COVID-19. With the latest data available, 16 of the 25 cities with the most cases are Madrid: Parla and Arganda del Rey exceed 800 positives per 100,000 inhabitants. The figures come from the latest data by municipality published by the autonomous communities and collected by elDiario.es.

Thus, removing Lorca, Linares, Pamplona and the cities of Castilla y León and Castilla-La Mancha, the municipalities of Madrid are the ones with the worst epidemiological data to have accumulated at this point. After Arganda del Rey and Parla, other cities such as Fuenlabrada, Madrid and Getafe also exceed 500 and are, therefore, the cities that must be confined as a measure to try to control the pandemic.