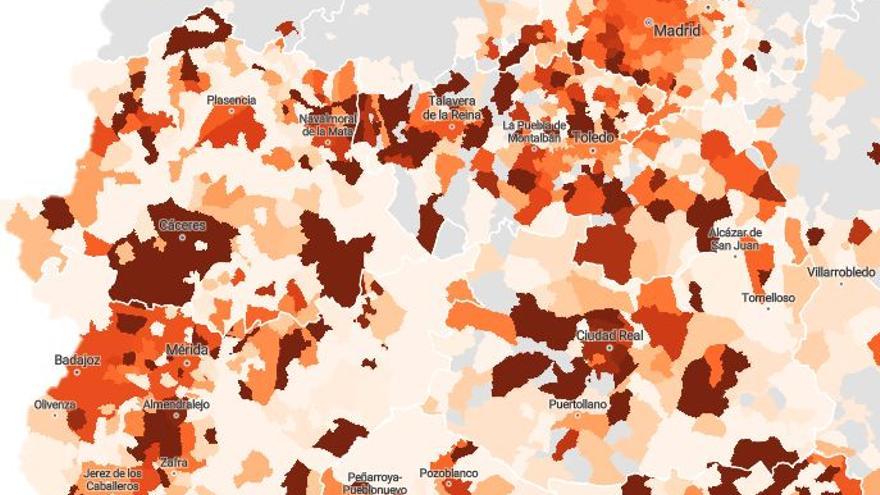 Contagions are triggered again in half of the municipalities just before the start of Christmas in Spain. Almost two months after the rapid decline in infections in the second wave of the coronavirus in Spain, the evolution of the pandemic begins to show a change in trend in most localities in the country. More than 900 cities and towns where half of the Spanish population lives again register a rise in infections. Among them, large capitals such as Madrid, Barcelona, ​​Palma and Valencia, in which cases have multiplied again in the last two weeks. This is the result of the analysis carried out by elDiario.es based on data from the Health Councils of 17 autonomous communities and the cities of Ceuta and Melilla.

The curve of confirmed cases of coronavirus is decreasing in 898 municipalities where 34% of the Spanish population lives. However, the pandemic is on the rise📈in 902 municipalities where 48% of the population live and in a plateau phase in 154 where 8% live. The rest are very small municipalities where very few cases are registered – less than 5 every two weeks – or for which there is no information available – which represent 11% of the Spanish population. Where are cases going up? Mainly, in Madrid, Catalunya, Tenerife (with Santa Cruz de Tenerife at the top), the Balearic Islands (with Palma with an extreme incidence), the Valencian Community and Extremadura.

This new rise in the curve comes after a general reduction in extreme incidents that were registered in practically the entire territory just a month ago. A trend that has been reversed with the figures recorded in the last week. According to the latest figures, two million Spaniards reside in municipalities with an incidence of more than 500 cases per 100,000 inhabitants, twice the rate that the Ministry of Health describes as “very high” risk. Last week only one million people lived in municipalities with this incidence.

In large Spanish cities, although the decline compared to the peak of the second wave is evident, the rebound in infections is already changing the epidemiological situation of the most important cities in the territory. Last week, for the first time in months, not a single large Spanish city had more than 500 cases per 100,000 inhabitants. With the latest data available, two large municipalities once again exceed this threshold: Palma (Mallorca) and Vila-Real (Castellón).

The map that opens this information shows the data of total confirmed COVID-19 cases, in 14 days and the trend of infections in each municipality of the autonomous communities that have published their data on infections in each town: practically the entire territory With the exception of the smaller municipalities of Castilla y León, Castilla-La Mancha and Galicia, which do not break down the figures for the municipalities with fewer inhabitants.

It must be borne in mind that the data from the communities are not always homogeneous with each other due to the type of tests they include, the dates on which their figures are updated or due to changes in the publication of the data in the same month. More details on the methodology.

In total, the figures collected add up to more than one million cases of coronavirus in which the municipality of residence of the infected person has been identified. Of the 17 autonomies analyzed, Madrid is the city with the most infected detected in a single municipality. However, the municipalities with the highest incidence rate (cases per 100,000 inhabitants) are small localities in which an outbreak can affect a larger proportion of the population.

Balearics, according to this last minute information, at first refused to share his data, although in the end he published it. Extremadura, under the same criteria, initially only published 8 most populated municipalities in the region. Now it publishes the figures even by local entities, villages and districts. Castilla y León is only publishing its figures for municipalities with more than 1,000 inhabitants and Castilla-La Mancha those with more than 500 inhabitants. They are not the only cases, practically half of the regions refused to publish their figures, arguing that they wanted to avoid the stigmatization of specific municipalities. Today, they all publish their data on Covid-19 cases by municipality.

To date, the municipalities of all the communities are included with the exception of those with less than 1,000 inhabitants in Castilla y León, those with less than 500 inhabitants in Castilla-La Mancha, and municipalities with few cases in Galicia. Some communities only include confirmed cases in recent weeks and do not publish their accumulated data since the start of the epidemic.

For practically all municipalities, the incidence of confirmed cases in 14 days is compared according to the latest available data with that registered two weeks ago. As December 8 was a holiday, some communities did not publish data by municipality on that day and in some communities the incidence figure has been compared with that of 13 days ago.