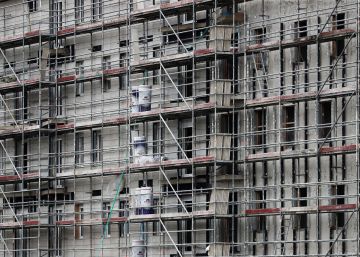 The Government wanted to appease the business unrest for the last stop decreed to the economy a week ago, with which he ordered the almost total hibernation of industry and construction. As a sign of consideration, the Executive advanced yesterday, a day before the Council of Ministers, the weekly follow-up meeting held by the economic ministers (of Economy, Labor, Social Security, Finance, Industry and Transport) with business and union leaders to inform you, before today’s ministerial meeting, of the progress of events and your next decisions.

In theory, according to what was declared on Sunday by the Prime Minister, Pedro Sánchez, and the Vice President for Economic Affairs, Nadia Calviño, next Monday will end what was called the hibernation of the economy and the validity of the compulsory paid permit decreed minutes before 12 at night on the 29th by the Government to stop the vast majority of activities, except for assistance.

However, no ministry of those affected or any minister who appeared yesterday clearly confirmed that all activities that were halted on the 30th can be reactivated next Monday. In fact, the Interior Minister, Fernando Grande-Marlaska, indicated that the return to the activity scheduled for Monday April 13 will depend on the extremes of the extension of the state of alarm.

Despite this, sources of those attending yesterday’s meeting between the Government and the social agents indicated that the intention of the Executive is to allow the return of the activity of the industry and construction sectors, although demanding the adoption of the corresponding measures for the protection of workers, as well as physical distance between them, wherever possible.

These same sources indicated that, among these preventive measures, they will be wearing masks and gloves and adopting risk prevention plans by sectors, which will be monitored by the labor authority. In this sense, the businessmen consulted yesterday trusted that the Government would be guided by the sanitary criteria to negotiate these plans with the affected sectors.

The UGT general secretary, Pepe Álvarez, said yesterday at the end of this meeting that “without protection there can be no reactivation”. For this reason, it demanded that the Government ensure the supply and distribution of personal protective equipment (PPE) for the workers of the companies that maintain the activity and those that will reactivate it as of Monday, and that it monitor compliance by the companies, which have to provide these teams and measures to workers.

From the Government yesterday it was transferred to the social agents that the supply of masks, gloves and gels “is guaranteed”, although they did not specify the distribution channels, which are being designed in a national plan by the Ministry of Industry.

The businessmen attended the meeting with the government suspiciously yesterday after the discomfort caused by the precipitation with which the majority of industrial and construction activities were canceled on March 29. That afternoon, intense business mediations managed to get the government to include a 24-hour moratorium for companies to organize their closings and for the law to allow companies to set up workers’ checkpoints that could maintain the minimum and essential activity so as not to propitiate the closure of the deal.

The employers of the construction companies and infrastructure concessionaires, Seopan, did not know yesterday how their sector will reactivate from the break, which, according to their calculations, is affecting 1.8 million workers and that each day of paralysis is causing the loss of 345 millions of euros. While the employers of the Andimac reform estimated yesterday – after a survey of 370 firms that employ 350,000 workers – that if the state of alarm lasted two months it would cause losses of close to 3,000 million in these activities. Another sector that showed its strong disagreement with the paralysis agreed by the Government was the Basque industry, which yesterday was waiting for the evolution of the markets to determine what is the degree of reopening of the facilities that they can activate after the holidays Easter and always complying with the decree of March 29.

From the Basque employers Confebask yesterday they bet on this prudent strategy to adapt to the next levels of demand in different sectors.

On the other hand, the leader of the Workers’ Commissions, Unai Sordo, yesterday demanded that the Government take more social protection measures “for groups that still do not have access to aid” and referred to the minimum vital income or other types of subsidies. From the Executive, they repeated yesterday that they continue to work on said minimum vital income, but that they do not plan to approve it yet in today’s Council of Ministers.

Rejection. The offer of new La Moncloa Pacts, which Pedro Sánchez has made to political parties and regional presidents to jointly tackle reconstruction after the coronavirus crisis, does not have much future at this time. “The Moncloa Pacts were a change of regime towards a European democracy. But we are already in a democracy, we are already in the EU. The dangerous thing would be that these pacts entail a disguised regime change, “said the opposition leader yesterday, who considers the government’s offer as” a decoy. ” For their part, formations such as ERC, Bildu, PNV or Vox are also contrary to this great agreement that, as explained yesterday by the Minister of Transport, Mobility and Urban Agenda, José Luis Ábalos, seeks to lift the country after “the greatest health emergency of the last 100 years. ” It would be, he insisted, “launching Spain forward”, which requires the signing parties to share their main objectives. For their part, the Navarro People’s Union, the Asturias Forum, the Canary Coalition, Teruel Exists and the Cantabrian Regionalist Party (PRC), have been in favor of the initiative.