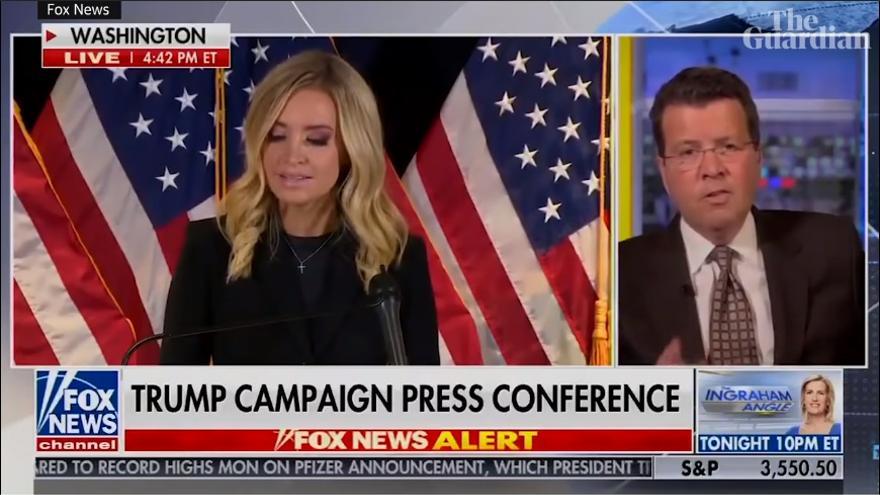 The conservative chain Fox News, which has maintained a close relationship with Donald Trump, interrupted a press conference on Monday by the White House press secretary, Kayleigh McEnany, in which it repeated the president’s refusal to accept defeat in the elections and he redoubled the accusations of electoral fraud, of which there is no proof. The spokeswoman insisted that Republicans want “every legal vote to be counted and every illegal vote discarded,” prompting Fox News to stop broadcasting the press conference.

From the studio, host Neil Cavuto replied, “Wait, wait, wait. I think we have to be very clear. He is accusing the other party of embracing fraud and illegal voting. Unless he has more details to back that up, I can’t keep showing you this. ” The decision to cut the broadcast of the press conference was made by the presenter, not by the high command, according to him Washington Post, which quotes people familiar with the program.

The decision has put the focus back on Fox News, owned by tycoon Rupert Murdoch, after a week in which he has distanced himself from Trump after having remained close to the president during his term.

To a large extent, the news channel has treated with prudence, when it has not denied, the complaints of massive electoral fraud that the president has defended without providing evidence. “But we haven’t seen that level of fraud,” the network’s top political anchor, Bret Baier, said live, responding to former Republican House Speaker Newt Gingrich in an interview.

Two days earlier, Fox News policy editor Chris Stirewalt, had also ruled on the statementsIt’s unfounded of the Trump campaign. “Lawsuits,” Stirewalt said. “We have yet to see any evidence that there is something wrong.”

Even more forceful was a reporter for the network in a live connection from Philadelphia, in the state of Pennsylvania (thanks to which Biden finally sealed his victory), who at that time captured all eyes.

Asked about the allegations by Trump’s team, which alleged that its observers were not allowed to see the count at the polling stations, the journalist replied: “It is not true, it is not true. It is simply not true. The observers of the elections (…) Republicans have been in this room, in that room, where they are supposed to be, alongside the Democrats. There is a specific area for Democratic observers and Republicans. So the statement of the Trump campaign and of the president about that is not true. It is false. ”

The conservative channel, considered for years an ally of the Republican leader, had already enraged the trumpists Election night by awarding the state of Arizona to Joe Biden before any other network, giving the Democrat an oxygen balloon. Fox’s decision unleashed Trump’s fury, as collected The New York Times, who described how the news fell like a real jug of cold water in the White House, where the mood was optimistic after Florida turned red. Trump and his advisers erupted: If Arizona was lost, this would call into question any victory declarations the president might make.

It was a night of angry calls from Trump to Republican governors, according to the US media, according to which Jared Kushner, the president’s son-in-law and senior adviser, was also in contact with Murdoch, the owner of Fox News, during the course of the night . According to a source cited by Vanity Fair, the president called Murdoch, to “complain loudly about the award [de Arizona a Biden] and demand that it be retracted ”.

Far from giving in to pressure from Trump’s advisers, the network stood firm in its decision on Arizona and refuted the president’s team’s insistence on a final victory in the state. Arnon Mishkin, an analyst and decision-maker at Fox News, defended in a connection with the team of presenters that he was “absolutely sure” about the announcement. “Sorry, the president is not going to be able to take the lead and win enough votes.” After Fox, the Associated Press – the standard for counting in the country – also awarded Arizona to Biden, while other outlets such as The New York Times and CNN did not declare a winner due to votes by mail that remained to be counted.

The conservative network was also critical of Trump’s speech when, taking advantage of the uncertainty in the middle of the election night, He went out to tell the press without evidence that the elections were a “fraud”, presented himself as the winner and assured that he would go to the Supreme Court to overturn his defeat. “We are winning everything. This is a record, there has been nothing like it, ”Trump said, even though scrutiny in key states was still going on, especially in Pennsylvania, Michigan, Wisconsin, Arizona and Georgia.

Chris Wallace, moderator of the first presidential debate and a Fox News journalist known for his interviews, commented: “This is an extremely flammable situation and the president just tossed a match on it. He has not won these states. No one says he won the states. states. States have not said he won. ”

Since then, the channel has come under attack from fervent Trump supporters, who have viewed Fox’s refusal to distort the truth about the vote as treason. “Fox is shit” and “Fox, shame” were some of the slogans chanted by supporters who gathered at the gates of the Arizona polling stations shouting “count the votes.” On social media, some Trump supporters wrote that they believed several Fox reporters had gone “completely leftist.” On Twitter, some supporters of the president have called Fox News “fake news“(fake news). The network has also come under fire from a pro-Trump flotilla of smaller media.

On Friday, host Laura Ingraham spoke about Trump’s alleged accomplishments, but later urged him to accept defeat with “grace and composure.” On Saturday, the day Biden’s victory was finally declared, the network featured a parade of guests, including prominent Republicans like Karl Rove, who backed the AP projections, further isolating the president and his supporters, The Guardian reports. .

However, there has not been complete unanimity in the content broadcast by the chain. On Wednesday, Ingraham claimed that Democrats were trying to “destroy the integrity” of the electoral process “with these mail-in registration efforts.” While he did not endorse Trump’s claims of alleged election fraud, host Sean Hannity expressed doubts about the vote: “Do you trust what happened in these elections? Do you think these election results are accurate? Do you think this was a free and fair election? I have a lot of questions. ”

Jeffrey McCall, a communication professor at DePauw University (Indiana), has argued in statements to the AFP agency that Fox News has always had two faces: on the one hand, star presenters, more editorialists than journalists and ultra-conservatives, and on the other, a more moderate wording. In his view, the treatment of the elections in recent days and the announcement of Biden’s victory in Arizona indicate “Fox News’s efforts to function as independently as possible from the editorialists.”

Trump had already been maintaining a public love-hate relationship with Fox News. The president watches the network frequently, has tweeted videos of its programs, participated in some of them, responded to real-time programming and praised some of its hosts. However, he has grown increasingly frustrated against the news channel, questioning some of its decisions, lashing out at Wallace for his role in the first debyou, and complaining that the network is not as favorable to him as it was when he first ran for office.

As he faces his departure from the White House, Trump has vowed to exact revenge on the network that fueled his political career, according to close advisers. quoted by the Washington Post, “Perhaps by publicly attacking Fox or undermining its business model by supporting competition,” according to the US media.