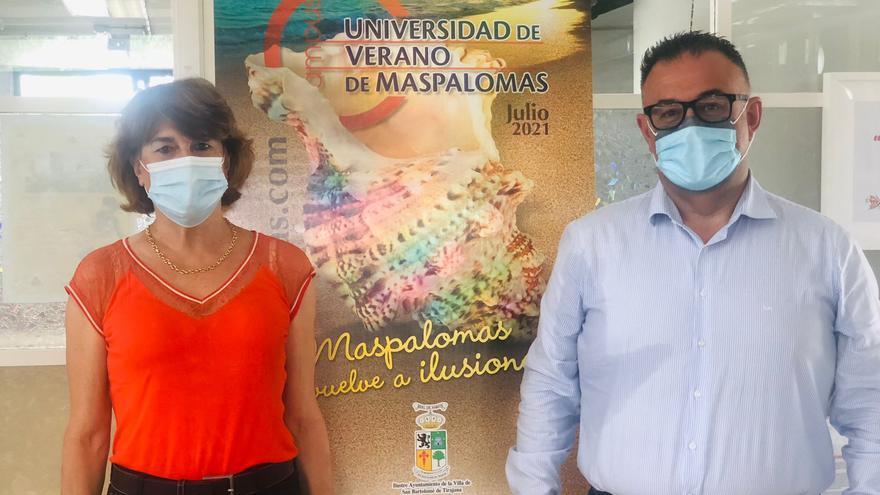 “The Delta variant is not the dominant one, but it is on its way to being so. All Spanish regions are concerned about the incursion of this variant of covid19 ”, he said Conrado Dominguez, director of the Canary Islands Health Service, in his speech in the course on ‘Social and economic impact of Covid19 in the Canary Islands’, from lto XXIX edition of the Maspalomas Summer University.

However, Domínguez pointed out that vaccines protect the population, but we are concerned about the increase in hospitalizations. “In Tenerife, only in the Hospital de La Candelaria there are more than 115 hospitalized. The situation is worrying and that is why we clung to the decision of the curfew, even though the justice has not accepted it, ”reports the press office of the University of Maspalomas.

In his conference on ‘Capacity and performance of health and social services’, Domínguez said that the plans are that, in the month of July, 70% of the Canarian population is vaccinated. “We plan to vaccinate children between the ages of 12 and 13 at the beginning of the school year and recover that population that has not been vaccinated since December. We will do a second round with everything, so that after the summer the entire population is vaccinated ”.

Regarding the non-application of the curfew in Spain, he stated that “we are very saddened by the judicial situation. In other autonomous communities, such as Valencia, it seems that the sensitivity of the judges is different, and more so, when the Prosecutor’s Office had positioned itself in favor of this measure, because it is one of the few that the autonomous community had left. We will raise it before the Supreme Court to be able to reach instruments that we need to have in the Health Service, “that we are the ones who have to fight the pandemic.”

Regarding the cases detected in vaccinated people, he explained that “what complete vaccination does is prevent the disease from developing, but not that you can acquire it. It is being acquired among young people, who have contact with the older people in their family. But we are vigilant and what we must attend to and prevent it from developing ”.

He announced that, as of July 20, pharmacies will offer antigen tests without prescriptions. “The application of this rule will be coordinated with the Pharmacists’ Associations and any positive will be reported immediately, just as private laboratories do. It is a detection system that works best when there are symptoms, but any positive must be communicated, isolated and do all the tracking work and this will be additional work for the Health System.

For its part, Beatriz González López-Valcárcel, professor and researcher in Spanish Health Economics, He intervened with the presentation ‘Health economics vs health of the economy’, he was also in favor of applying the curfew, because “in the face of the population this decision does not help much. We need to have clear communication with the population about what we should do, as a community, to protect ourselves. Receiving conflicting messages from different sources doesn’t help. Above all, at a time when in Europe what happened to Spain two weeks ago is beginning to happen ”.

Beatriz González stated that, on the map of Europe, until July 4, “Spain was in red, except for two communities, Galicia and Castilla La Mancha, while all of Europe was in green, except for a couple of places in orange. in Sweden and Ireland ”. In his opinion “you cannot lower your guard. The incidence rate in young people between 20 and 29 years old is 10 times higher than that of people in their 70s. It is clear which is the risk group, right now ”. The solution, he stated, is “to vaccinate this population group as quickly as possible, especially due to the appearance of the Delta variant.

“I think that in the Canary Islands we have been very sensible, at least I see people on the street, young people, being prudent, with masks and distance. We must continue with a police control, although it is not very effective. The most effective thing is the awareness that “this goes with everyone and how each one of us does it.”

To conclude, Beatriz González said that “the fifth wave is already here, but with a difference from the previous ones. Fortunately, the people most at risk are vaccinated. It is a very explosive wave, with more than 500 cases of daily infections in the Canary Islands, but at the moment in hospitals and Ucis there is not much notice, although hospital admissions will rise in the coming weeks, but it will pass ”.

Tomorrow thursday, Domingo Lorenzo, graduate in Economics, Sciences and Techniques Statistics, Business Administration and Management, will present, at 12 noon, the conference ‘The impact of Covid-19 on the island economies of the Canary Islands’, which will be followed by the intervention of Antonio Gonzalez, doctor, from the University of Las Palmas de Gran Canaria, advisor, consultant and expert in management and strategic planning, with the presentation ‘From zero to tourist closure. Strategy of reactivation, innovation and transformation, through active and nature tourism ‘.

On the last day of Friday, Jin taira, Vice-Rector for Internationalization of the ULPGC, will present the conference ‘[re]THINK HABITAT in the era of COVID, to end the intervention of Patricio Viñayo, journalist and member of the Delegate Commission of The League and counselor of the Spanish Society of Professional Soccer, who will speak of ‘Empty stadiums: the virus of absence’.