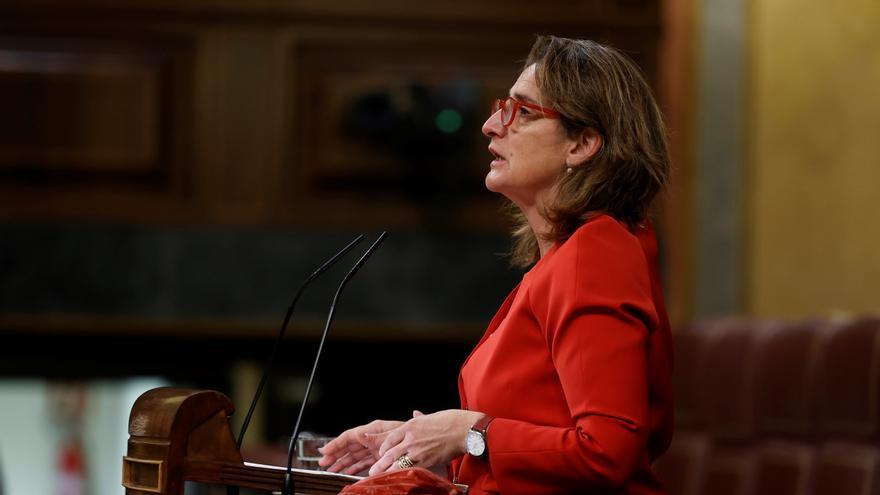 The Plenary of Congress has validated this Thursday the Royal Decree-Law that softens the cut in the income of electricity companies due to the upward spiral of gas, by excluding from it the energy that the generating companies demonstrate to have committed in a term contract of at least one year. The text, which also reinforces the social bonus for vulnerable consumers and introduces new transparency obligations for companies, has gone ahead with a large majority of 189 votes in favor, 158 abstentions and only one vote against.

During the defense of the text, the third vice president and minister for the Ecological Transition, Teresa Ribera, insisted that in the face of the current energy crisis it is necessary to consider the "limits of a system that clearly needs improvements" because the current regulation "does not work" in "extreme" situations like this one, in which the price of natural gas has been skyrocketing for months, pushing up the wholesale electricity market due to its marginalist design.

Ribera, who began his speech with a few words of condolence for the firefighter who died this Wednesday at the Ascó nuclear power plant (Tarragona) due to a CO2 leak, stressed that electricity prices in European wholesale markets remain "at levels unpublished ", this month even higher in other countries than in Spain, among which he mentioned France, which" has been spending the whole month of November with prices higher than ours. " The minister has reiterated that the promise that this year the average amount paid by households this year will be "equivalent to the bill of what was paid in 2018" will be fulfilled.

The new decree, described as another "patch" by various formations, and "necessary", according to PNV spokesperson Idoia Sagastizábal, has been approved by a comfortable majority in a debate that has not been without criticism of the Government. The text significantly reduces the impact of another decree-law approved in September for, as the Executive said then, cut 2.6 billion euros to electricity companies to reduce charges by 96%, the regulated part of the receipt set by the Executive. Ecological Transition modified this system after the warnings of the PNV, the strong pressure from the electricity companies and the announcements of rate increases to the industry by the latter.

During the debate this Thursday, the energy spokesman for United We Can, Juan López de Uralde, announced the vote in favor of the decree of its formation, but called for an "in-depth reform" of the electricity market because it is "unfair" that " Power that costs 3 MWh to produce is sold by the oligopoly electricity companies for 200 euros or more. " In a cross of reproaches with the PNV, Uralde has accused the Basque nationalists of being "leaders in revolving doors".

The decree excludes from the cut approved in September the energy covered by a forward contract prior to September 16 and that contracted for later when it has a duration of at least one year at a fixed price. For this, the marketers will have to report, one month in advance, any modification in the contracts and send to the National Commission of Markets and Competition (CNMC) transparent and updated information on the available offers.

The text also imposes new information obligations in the wholesale market to strengthen the supervisory capacity of price formation mechanisms and expands the measures aimed at vulnerable households, such as discounts on electricity bills of up to 70% and a check of 90%. Euros on average per household from December for heating of consumers with social bonus.