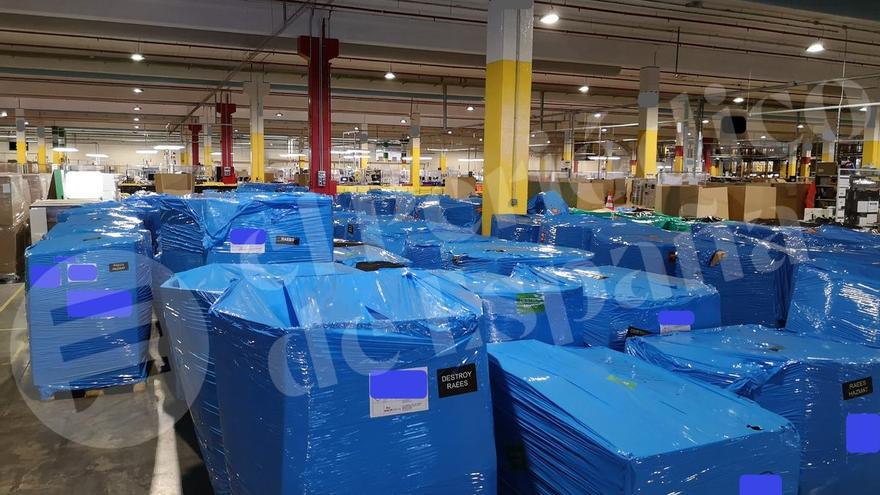 The measure is included in the Waste Law project, currently in process

The waste law will prohibit the destruction of surplus non-perishable products, including textiles, footwear, toys and electrical appliances. This is stated in the waste bill, currently pending in Congress, which only makes an exception for products that must be destroyed “in accordance with other regulations” (for example, if they are counterfeit products).

The text provides that surpluses donated or enter reuse channels. If neither of the two previous options is possible, they will need to be prepared for reuse: that is, they will be cleaned or repaired to be used again without receiving any other transformation. Specifically, the bill prepared by the Vice Presidency of Ecological Transition states:

“The destruction of unsold surpluses of non-perishable products such as textiles, toys, electrical appliances, among others, is prohibited, unless said products must be destroyed in accordance with other regulations. Said surpluses will be destined in the first place to reuse channels, including their donation, and when this is not possible, to the preparation for reuse “.

The law also establishes objectives of waste reduction, impose restrictions on single-use plastics and broadens the responsibility of the waste producer. Until now, when the waste left through the door of the company that had generated it, it could wash its hands because the responsibility fell on the manager. With the new rule your responsibility remains until the end.

Destroying unsold items is one common practice in the industry. Amazon does it, as revealed on Sunday THE NEWSPAPER OF SPAIN, but so do perfume, clothing and appliance companies. The multinational recognizes that unsold management is “a challenge” for all retailers.

“They destroy so that it is not resold”, affirmed sources of the sector to this means. Carlos Arribas, waste manager at Ecologistas en Acción, recalls episodes such as the El Campello landfill in Alicante, where Neighbors found refrigerators and televisions buried in the trash and the Environment fined the plant’s management company, FCC, 20,000 euros.

With the new law, this practice is prohibited, although among the partial amendments presented by the different parliamentary groups there are proposals to qualify the item in question. Vox submitted an amendment to the entirety that was debated and rejected last June.

ERC suggests banning elimination of unsold surpluses “by means of its deposit in landfill “. In addition, it proposes that producers and distributors are obliged to communicate to the environmental authorities “the products that they put on the market annually and to what extent they have been managed.”

The Popular Party, for its part, has presented 207 amendments to the project.

“We understand that this law does not strengthen the competitiveness of the Spanish economy,” says César Sánchez, spokesman for the Commission for Ecological Transition and Demographic Challenge. “It generates two collection taxes: the plastic tax and the tax on the deposit of waste in a landfill.”

In those relating to surpluses, the popular ones propose increase the assumptions to be able to destroy.

For example: that companies can destroy surpluses “when their reuse, revaluation and recycling involve serious health risks or safety in general, the environment or any other public interest such as consumer protection “.

Also that they can destroy when “not possible“To guarantee the use of said surpluses and that” cases “to which the prohibition will not apply can be established by regulation.

“The idea is that if something is bad here, it will also be bad in the Third World. We believe that we must expand the assumptions so that products are destroyed if they are not good or safe enough to be donated “.

The PP has included an amendment to eliminate VAT on product donations, a claim from the distribution sector. This amendment has been drafted with the help of the Association of Manufacturers and Distributors AECOC, which groups together the large food and distribution companies in the country, Amazon included.

This Wednesday, AECOC will give a press conference in which it will publicly present this petition together with the Spanish Federation of Food Banks (FESBAL).

AECOC defends that both the Waste Law and the Food Waste Law – whose blueprint it has just been approved – they are “accompanied by a coherent fiscal policy”. Ask incentives for companies to donate products and not just destruction bans.

“Today, donations of any kind are taxed. What we say is that, If you are going to make a donation of a social nature, it does not cost you money“, says the deputy of the PP.

The amendment proposes to change the VAT law to apply type 0 to “deliveries of goods made as donations to non-profit entities.”

As EL PERIÓDICO DE ESPAÑA has learned from industry sources, Amazon is one of the great defenders of this proposal. Claim her as incentive for sellers on your platform – third-party companies that sell through Amazon and are responsible for their own inventory – donate unsuitable products.

Other sources in the waste management sector express their doubts regarding the prohibition of destroying surpluses. “Since, logically, companies do not want their unsold products to go on sale, what they do is break the products before they reach the waste manager. If you hook unsold clothing, how will you know if it is new or a defect? ​​”