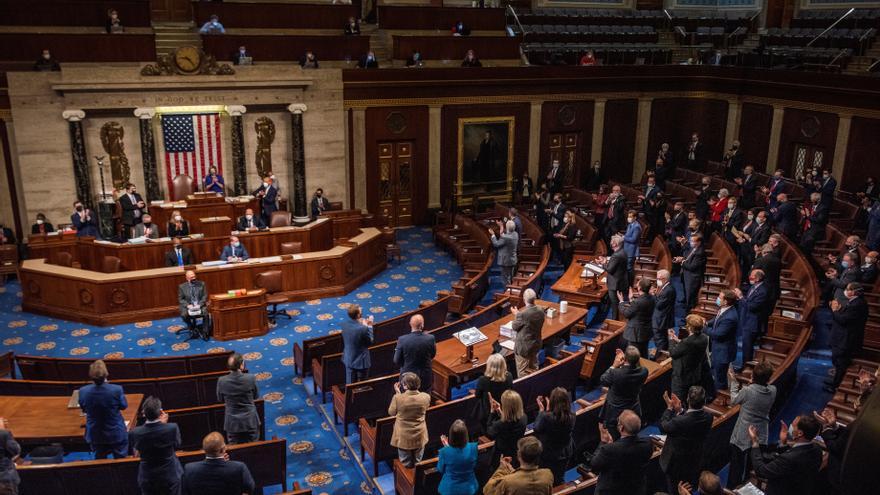 The United States Congress has resumed at two in the morning (Spanish time) the process that must ratify Joe Biden as president. No Republican senator has endorsed the attempt to challenge the outcome of the elections in the state of Georgia, although the process has been halted again after the refusal to withdraw the challenges in Pennsylvania.

Minutes before the assault, Trump had given a speech to the protesters in Washington encouraging them to march towards Congress, not give up and not consent to the victory of Democrat Joe Biden. The protesters have reached the main hall of the Senate, they have occupied the office of Nancy Pelosi and the congressmen and Mike Pence have had to be evacuated from the building.

While the attack was taking place, Trump was tweeting against his vice president for not giving in to his pressure and not blocking the certification of the election results. “Pence has not had the courage to do what needed to be done to protect our country and our Constitution.” Minutes later, and after the escalation of violence, the president has asked the protesters to “support” the police and the authorities. “They are on the side of our country. Be peaceful,” he added.

Finally, the president made a third intervention asking the assailants to go home: “They have stolen an election from us and everyone knows it, especially those on the other side, but you have to go home now. We have to have peace, law. and order. Come home. We love you. You are very special. ” Minutes before Trump’s message, Biden had given a televised speech demanding that the president appear on national television to end the unrest. “Our democracy is under unprecedented attack,” Biden said.