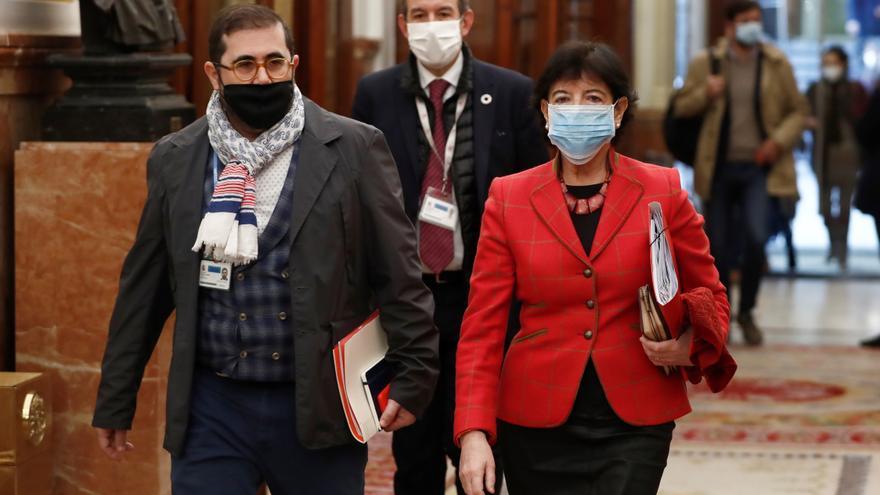 Habremus Celaá law. Congress pledged its support for the new Education Act (LOMLOE) this Thursday morning. If no deputy makes a mistake when pressing the button, that’s how tight the vote can be, at some point in the afternoon, when the plenary debates end, the Celaá law will be approved by the Congress of Deputies, ending this way the first and most important parliamentary procedure.

If nobody changes their direction of the vote with respect to the one announced during the morning session and with Bildu’s uncertainty, who has not revealed his position although an abstention is sensed, the Government will obtain 177 votes in favor (PSOE, UP-ECP, ERC, PNV and More Country) and 165 against (PP, Vox, Ciudadanos, JxCat, Navarra Suma, CUP, Coalición Canaria and the PRC) along with 7 abstentions (Bildu, Teruel Existe and BNG).

The ruling has gone ahead with the form that the PSOE wanted: the party wrote the law and has approved all the amendments it presented and others it supported, especially but not only from United We Can. None of the more than 300 amendments that have been approved have done so without the consent of the PSOE, despite the last minute scare this morning. PNV and Junts presented an amendment in defense of the concerted school late yesterday that quickly got the support of PP, VOX, Ciudadanos and other loose votes from small parties such as UPN and the PRC. The amendment sought to eliminate point 5 of article 109, on the offer of places, which says: “The educational administrations will promote a progressive increase in school positions in the network of publicly owned centers.” Also, where the LOMLOE speaks of “guaranteeing the sufficient existence of public squares”, it added a “and those that guarantee the provision of the public service of education, especially in areas with new populations.”

In those cases, with ERC abstention, the amendment would have gone ahead. The party fed the uncertainty without revealing the meaning of their vote, about which there were doubts due to the high presence of the concerted school in Catalonia. Finally he rejected the amendment and the guarantee of vacancies remains in the law awarded to the public network.

The debate has been carried out correctly until the end of the intervention of the PSOE deputy Mari Luz Martínez Seijo. When the parliamentary was finishing, from the sector occupied by the right in Congress the noise level has been increasing, until the spokesperson was interrupted. When this has managed to end, the entire right front of the hemicycle has risen and has begun to shout “freedom, freedom” as they beat their seats.

The shouts of the right wing, followed with more enthusiasm by some deputies than others, have been answered by applause among the parties that make up the Government for the approval of the law (although it will formally be this afternoon). Under the protest of PP and Vox is the element that has most separated the two groups during the processing of the law: the role of the concerted, that the text lowers something not directly, but rather by reinforcing public education as a guarantor of the educational offer.

Before the fight, each party has reiterated the position that they had been explaining in the Education Commission these past weeks and making clear the positions so far apart between blocks, which Sergi Miquel, of JxCat, has summarized. “We needed a law not of one side, but a bit of all,” he said after thanking the PSOE for their “willingness” to dialogue despite not having understood. Sandra Moneo, from the PP, has been less kind to the Government: “It is a deeply ideological law, which suppresses the culture of effort and the search for quality”, and has accused the Government of breaking with everything: with the language for Castilian , with the “demand” of society to reach a pact and with the freedom of families. Martínez Seijo, from the PSOE, has reproached him for defending only the freedom of those who have more and has reproached the campaign that the concerted school is carrying out against the law, with the use of underage students included. Javier Sánchez Serna has defended that today is “a bad day for those who defend that education is a class privilege” and ERC has stressed that “it is not our law, but it is better than what there was and it was a moral duty to deactivate the law Wert “, while Miquel, from JxCat, has made his left ugly” his obsession for everything to be public. ”

The LOMLOE now goes to the Senate, therefore, where no major changes are foreseen by the majority that the PSOE has. The law maintains the changes that have been agreed these weeks: the reference to Spanish as the vehicular language of teaching is eliminated, the public school is placed as a guarantor of the educational offer and It will try to reduce the segregation of students by distributing it equitably through the network of centers supported with public funds., there will be no Ethics in 4th grade, among others.