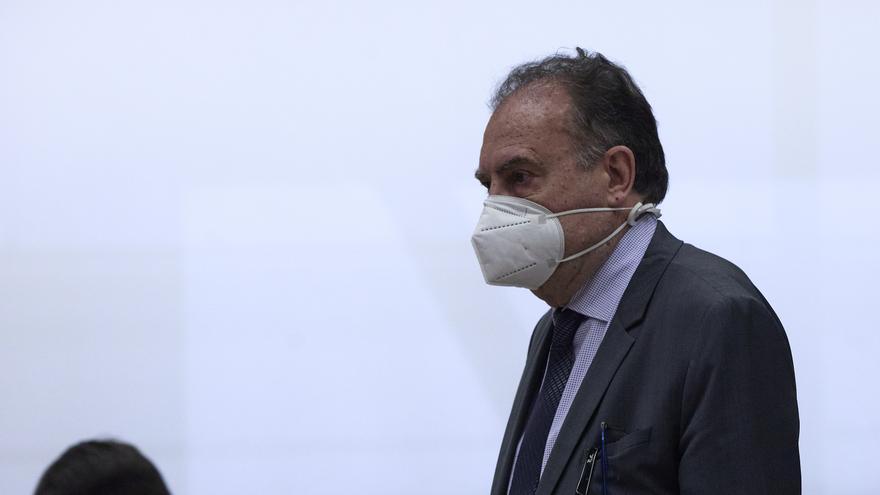 The commissioner on leave of absence José Luis Olivera has disassociated himself this afternoon in Congress from the statements made by José Manuel Villarejo in his presence, and which appear in a recording incorporated into the summary of Tándem, in which the main investigated assures that, if not It becomes for him and for the person appearing this afternoon before the commission investigating Kitchen, the Gürtel case "could have sent them all to take it up the ass", alluding to the leadership of the Popular Party.

The statement is explained by the fact that Olivera was the head of the Economic and Fiscal Crime Unit (UDEF) of the Police that carried out that case and that, at the same time, it did not reach the highest officials of the PP, in the time of Mariano Rajoy as party president. "The Gürtel could have, come on, could have sent them all to take it up the ass if it was not for this one (Olivera) ... and that cannot be forgotten in the fucking life," says Villarejo in the aforementioned recording.

Olivera, now with a managerial position in the Royal Spanish Football Federation, has assured that he does not know why Villarejo said that, that he has never affirmed it and that, on the contrary, he considers himself "the steamroller of Gürtel". "I have created the catastrophe for the Popular Party," he has come to say. "I have never played it for any game," he replied to the spokesman for Unidad Podemos, Ismael Cortés.

A similar position has been adopted when the deputies have brought up the conversations and annotations of Villarejo and other members of the gang, such as the businessman Adrián de la Joya, expressing their desire and making arrangements to appoint him, Olivera, director Police operative deputy, something that was frustrated. The commissioner on leave has assured that he did not want to be number two in the Police, a position to which, however, he formally appeared on several occasions.

The Popular Party spokesman, Luis Santamaría, has read Olivera's extensive curriculum and has accused the PSOE of wanting to criminalize the police officers who pass through the commission. At the end of reading the list of destinations and recognitions to Olivera, he broke the paper and said: "This is what is valid for Mr. Sicilia (PSOE spokesman)."

There is a conversation recorded in the summary in which Villarejo appears speaking with the lawyer Javier Iglesias, protagonist this morning in the Kitchen commission, which has been read by the deputies in several extracts and occasions this afternoon and which unfolds as follows:

Villarejo: "Apart from being the most ideal person (Olivera, for the DAO position) is that he has spent his whole fucking life doing male favors for these people, damn it, in 2009, this man and I were gambling that pal Rubalcaba , We were seeing him and he (Olivera) ambushed in the fucking car so they wouldn't bite us, man, uh, for the issue of the Gürtel of the balls ... That the Gürtel could have, come on, could have sent them all to drink up the ass if it's not for this one ... and that can't be forgotten in fucking life. "

Churches: "Starting with the boss ..."

Villarejo: "Starting with the boss shit ..."

Churches: "For the one with the mustaches"

ERC spokesman Gabriel Rufián asked him about these "favors." “I don't know,” Olivera replied, “I have done many favors for many people. If you ask me for a favor, I'll do it tomorrow. " Rufián has replied that he did not want to end up "in jail."

Olivera has tried to defend that it was precisely the PP who separated him from the UDEF upon his arrival to the government in 2012. The socialist spokesman, Felipe Sicilia, had to remind him that they separated him from that unit to promote him to director of the Intelligence Center against Organized Crime, which later would also be against Terrorism, also with Olivera at the helm.

Ultimately, the spokesman for EH Bildu, Jon Iñarritu, has asked Olivera if he had been decorated in times of the PP. The commissioner has had to admit that he was awarded a Police Merit Medal with a Red Badge, that is, a pensioner. Iñarritu has asked him if he had put his life in danger for this, as stated in the Law, to which he has not obtained an answer.

The Anticorruption Prosecutor's Office asked the judge of the Villarejo case, Manuel García-Castellón, an investigation into Olivera's assets that, for the moment, have not yielded conclusive results. The commissioner has not yet been called to testify.

The eight strategies of the PTCAN

Rivero defends the unity of the Canarian parties against the centralists