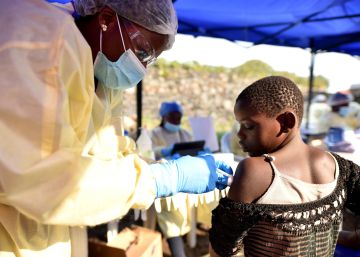 The Ebola epidemic that plagues the northeast of the Democratic Republic of the Congo (DRC), the second worst in history, turns one year old and continues out of control, already reaching 2,700 infections and 1,800 dead. The appearance this Tuesday of a second and worrying case in Goma, the most important and populated city in the region, has triggered even more concern about a possible regional expansion of the outbreak. The World Health Organization (WHO) and the Congolese Government are already preparing for try a second vaccine in the coming months to protect more people and create a second retaining wall.

One of the axes of the response to this epidemic has been the use, from the outset, of the rVSV-ZEBOV vaccine. Manufactured by Merck and already tested in Guinea in the 2014-2016 outbreak, the experts are very satisfied with its effectiveness, which are around 93%, although it is still in the experimental phase. However, its application in the northeast of the DRC to contacts of sick people, contacts of contacts and medical and frontline personnel is not being able to stop the spread of the virus. The main reason is that in a context of violence, distrust and mobility of the population, the follow-up of contacts has presented numerous failures.

The epicenter of the epidemic is currently in the city of Beni and the surrounding villages, where it was detected in August 2018. However, most of the cases throughout this year come from Butembo. The violent attacks on the treatment centers of the latter city and Katwa in March and the murder of Cameroonian doctor Richard Mouzoko in April by armed men reveal the climate of violence and rejection in which the response has been deployed against The epidemic Efforts in raising awareness and involvement of communities have been overcoming the initial barriers, but a year later there are still pockets of resistance.

Last May, when the epidemic peaked, the SAGE expert group that advises WHO has already recommended the introduction of new Ebola response strategies. Repeated violent incidents not only limited the follow-up of contacts in the field, which reduced the effectiveness of ring vaccination, but the first doubts arose regarding the existence of sufficient doses of rVSV-ZEBOV. Therefore, WHO raised the possibility of trying a second vaccine, complementary to the first one, that would reach more people. Outstanding personalities, as the co-discoverer of the Peter Piot virus, and medical institutions around the world showed their support for this idea.

The vaccine in question, in fact, was ready. The manufacturer, Johnson & Johnson, says it has a million doses, 500,000 immediately. It has been successfully tested in 6,000 human volunteers, although never in the middle of an epidemic. The strategy is to create a much wider second retaining wall, not only to contacts and contacts, but to the entire population in the so-called risk areas and in neighboring countries. While Uganda seems to be prepared for the possible emergence of the virus, as demonstrated by the effective management of two imported cases, the worst nightmare for international agencies is for the virus to jump to Rwanda, where there is no previous experience, and especially to South Sudan, with very weak sanitary structures, a changing situation in terms of security and refugee and displaced camps.

“Such a long epidemic is a good opportunity to try a second vaccine. The same is even better than the first, we do not know, for now it is more thermostable and its safety is already proven, ”says Miriam Alía, responsible for Vaccination of Doctors Without Borders (MSF), who adds:“ Above all we are clear that it does A change of strategy is missing. If epidemiological surveillance is not controlled, ring vaccination is not enough. We have to go to mass vaccination and there is no visibility of Merck's production capacity to face this change in strategy ”.

However, the initial plans to introduce the Johnson & Johnson vaccine in the northeast of the DRC clashed with the rejection of the Minister of Health, Dr. Oly Ilunga, who refused in the round and came to accuse WHO of “lack of ethics” . Among his arguments he explained the complexity of administering two doses in an interval of two months, a requirement of the new vaccine, in a context of enormous population mobility and rumors of all kinds, which could generate even greater confusion.

Before this refusal and after the declaration of the epidemic of international interest two weeks ago, the new Congolese president, Félix Tshisekedi, decided to personally assume the management of the response based on a group of experts led by the prestigious doctor Jean Jacques Muyembe, co-discoverer of Ebola in 1976 and director of the National Institute for Biomedical Research. Muyembe and Ilunga did not maintain good relations, so he decided to present his resignation, thus opening the door to the second vaccine.

Jean Jacques Muyembe, co-discoverer of Ebola in 1976, has warned on Friday that the authorities of the Democratic Republic of the Congo are only identifying about 50% of Ebola cases. "If we continue like this, this epidemic could last two or three years," he said in Goma, reports Reuters. The United Nations Security Council has also expressed its "deep concern" over this outbreak that is out of control. Its spread to neighboring countries, he said, "could have serious humanitarian consequences and affect regional stability."