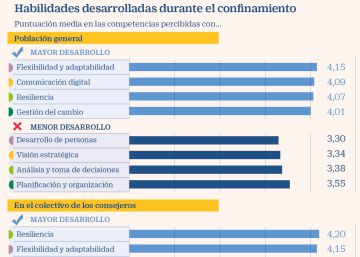 Flexibility was the skill that most developed in companies during confinement. It is what emerges from the barometer Key competences to face the new challenges after Covid-19 prepared by Talengo. The report measures 32 skills and scores from 1 to 5 the extent to which they have improved in each one during this period.

Thus, the study shows how, despite moments of uncertainty, most professionals quickly adapted to the new situation and developed the skills related to this aspect to a greater extent. Besides the flexibility (4.15), digital communication (4.09), resilience (4.07) and change management (4.01) are at the top of the table as the skills in which he was put the most the focus to face the new situation generated by the pandemic.

On the opposite side, people development (3.30), strategic vision (3.34), decision-making (3.38) and planning were the capacities that evolved the least during confinement. However, Vivian Acosta, partner of Talengo, emphasizes that it has been observed that 100% of the skills considered were worked and that the report only orders the extent to which some progressed compared to the rest. “From the moment the focus is placed on a competition until there are results, it can take a year; It’s been three months here and everything has evolved very fast. In a very short period of time, competences have been developed that, in other circumstances, would have needed much more time ”, celebrates the expert. This is the case of all tools related to teleworking: despite the fact that digitization had been on the agenda of companies for years without being fully implemented, in a matter of days, teams that had never done so were forced to work and communicate only remotely.

During these months, in addition, it has been shown that it was possible to extend telework more widely. “There was fear because the trust-responsibility binomial did not work. There were limiting beliefs that prevented this format from being established, but, in the end, you can’t target just that 1% that doesn’t work, ”shares Acosta. Far from avoiding responsibilities, this period has caused employees to learn to work with greater autonomy. “We were very used to going with crutches, because if something didn’t work for us, we could call the technicians. But we have seen each other at home, without the possibility of anything, and people have shown that they know how to manage with a lot of autonomy ”, he continues.

If the data is broken down by the position of the person interviewed, the report shows very similar results. The first four and the last four positions are occupied by the same variables, although the order does vary slightly. In this case, the Talengo spokeswoman considers that it is especially negative that the strategic vision and the care of the teams are repeated among the less developed skills also by the high positions. “They are the two levers that move an organization and the most important for it to be successful,” he reiterates.

Acosta considers that, in a context of uncertainty such as the current one, the strategic vision should have been among the most developed in order not to lose its way. “The situation has overwhelmed us and the management committees have been very aware of the short term, but those who have to take care of this are the middle managers. If the management has not done it, who has been looking at the long term? ”, Says the head of Talengo.

The position occupied by the development of people is also striking, especially at a time as delicate as the one we have lived, in which many people have experienced the loss of friends or family, have been confined to solitude, have feared for their job… “It is alarming that in a scenario like the current one, being aware of our workers has been the lowest variable”Laments Acosta. A situation that, according to the expert, is being reversed. “Now we are beginning to talk and do specific projects on the psychological care of people in the company,” she continues.

The report does not notice significant differences according to the age of the workers, thus breaking the myth that digital natives are more prepared to work remotely. “Being used to using mobile devices is not a guarantee of a greater ability to work in digital environments within the professional world,” reads the document, which, on the contrary, does show a small difference by sex. Women have developed less planning, while they are worse off in teamwork. “In homes where the distribution of tasks is not equitable, the professional day-to-day has been combined with housework and they have been overwhelmed,” explains the head of Talengo.

Tags: business, competition, enhance, flexibility, lockdown, report, talengo, telecommuting, to get better, to have, to size