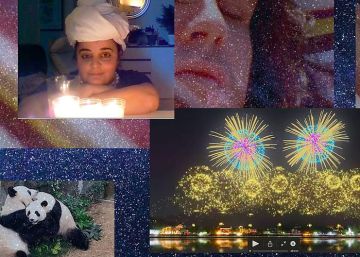 SpiedLife is a reality show Italian that has been broadcast on the Internet for a year and that shows simultaneously through webcams (real time broadcast cameras) what different people and families do inside their homes. It is a kind of Big Brother taken to the extreme, in which the participants are not together or know each other, but each one at home, in slippers and tracksuits, without makeup, showing us their daily lives: they cook, read, play cards , they iron, they do the dishes, they cut their nails. Without writers or rules. Without further ado.

When SpiedLife was released, no one would have imagined that this domestic setting would be the only landscape we were going to see a year later for a couple of months (for the moment) or that activities as inconsequential as shaving or cooking a cake would come to be experienced as authentic events. . If the program had followers before, it is not unusual that in this time of confinement due to the coronavirus the audience has multiplied: somehow, we are all now participants in that reality, It is like a reflection of our current state, we continually see other people’s houses and we have gotten used to showing ours, at first with some shyness, without any shame at this point. We have become voyeurs and compulsive exhibitionists.

With all that he plays Spacial station, one of the most original proposals of the Teatro Confinado cycle that La Abadía de Madrid has devised to maintain activity during confinement, a series of functions on-line that are developed live through the Zoom application for a maximum of 30 spectators. While the head of the room gives one by one entrance to the platform and ensures that everyone can see and hear the transmission – all a trade that of being a virtual usher, which usually lasts half an hour -, the cameras of SpiedLife liven up the wait on the screen. We see a woman picking up clothes while watching TV, a couple talking on a sofa, a father having tea with his children in the kitchen. All very bland, but hypnotic.

When the show really starts, we are already in the mood. This is going to travel the world through webcams. From the houses of the reality Italian to those of the creators and performers of the work, Álex Peña, Alberto Cortés and Rosa Romero, confined in different streets of Seville that we reached through Google Maps, to then peek into the cave of a panda locked in a zoo, spy on a family of polar bears or get on the International Space Station using Google Earth. All this interspersed live with domestic sequences, live music, infographics, poems, interactions between the computers of the performers and a fantastic scene in which Rosa Romero types in the bar of Google images Words or phrases caught on the flight of a parliament that Alberto Cortés recites in a parallel window, which causes the screen to fill with unusual photographs, completely disassociated from what we hear, subject to the whim of the algorithm. Try writing, for example, “let’s go for a walk” and you will see how crazy Google’s imagination is. “It is the poetics of the algorithm”, jokes Álex Peña, not in the function but in a later conversation.

SpiedLife, Google Maps, Google Earth, Skyline, Zoocam, algorithms, digital platforms, video calls… What does all this have to do with theater? Is this theater? It is the question that inevitably accompanies this type of work that has arisen with confinement. You almost have to apologize for calling it “theater”, its own creators tend to excuse themselves, “well, we already know that it is not the same as being on stage, but in the meantime we do this ”, many say. Indeed, it is not the same nor does it have to be, because if you tried it what would come out would be a fake, something out of format, like when the first television newscasts, still lacking to invent their own codes, reproduced the structures of radio stations. In the same way, it would not be a question now of producing works as if they were going to be performed on a stage with a live audience and then dump it on the screen – for that we already have the hundreds of films of past shows that are being put online free during quarantine— but to think them for this specific format with the tools that are its own. That is, SpiedLife, Google Maps, Google Earth, Skyline, Zoocam, algorithms, digital platforms, video calls and whatever comes up. Let’s call it transmedia theater: this is what there is at the moment. Why not explore it?

Spacial station it is a good example of where that research can lead. It does not come out of nowhere, since its three creators have long worked in that direction, exploring the limits of traditional theater. Álex Peña, for example, has on tour (now interrupted, of course) a theatrical installation called Recreational Federico, in which the public has to interact with arcade machines (foosball, slot machines, etc.) that recreate texts from Lorca. But it is that even the most conventional proposals of the Confined Theater, the monologues in which there are hardly any resources to accompany the performance of an actor, are capable of awakening unprecedented sensations: a different intimacy between the performer and the spectator, a kind of face to face in which the rest of the public and the world disappear.

The confined theater format works in itself, but also as a field of experimentation with digital tools that could be incorporated into face-to-face shows in the future. At the end of the day, this is how the theater has evolved over the centuries, integrating new technologies, from primitive lighting systems to live video so used today, breaking the fourth wall, taking it to the streets and even dispensing with from the sacrosanct “theatrical text”. It is true that many of these changes have raised strong controversies, voices that have denied that this was theater, but in the end everything has found its place. If this is not theater, welcome.

Tags: cycle, devise, digital, Format, new, open, The abbey, theater, to be, to explore, to have, to incorporate, tool, via, video call, welcome, work