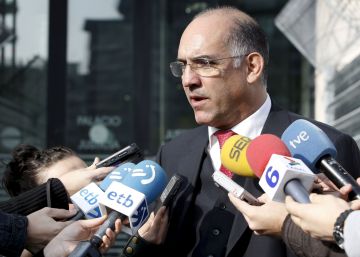 He only made money with it, he didn't believe it. The lawyer Miguel Alonso Belza, specialized in defending cases of violence against women, among others that of Nagore Laffage, victim of macho murder in Sanfermines of 2008, and lawyer of office shift of Violence Against Women of Gipuzkoa, He has been sentenced to penalties totaling seven years in prison for mistreating his sentimental ex-partner. The sentence details how the lawyer kicked, pulled the hair, spit and threw the victim against the wall in the discussions they had several times during 2016. One of those discussions was recorded by his former partner.

The Criminal Court number 2 of San Sebastián has condemned him by believing the woman who denounced the lawyer, for having physically assaulted him, as of 2016, when she decided to end the relationship. The Prosecutor's Office had requested 10 years in jail for these events, while the private prosecution had raised the sentences to 19 years.

The ruling, to which EFE has had access, highlights that Alonso Belza is "a reputed lawyer in the fight against violence against women, who in recent years had assumed a very active role, with multiple public interventions on the subject" . "This forces us to analyze whether we are facing a kind of Dr. Jeckyll and Mr. Hyde, since Mr. Alonso Belza defended women victims of sexist violence with rigor and exquisite professional zeal on the stand, but when he removed his robe he transformed in an abuser, as if adopting the role of those men against whom he had requested the maximum of convictions for his sexist crimes, copying his methods and behaviors, "says the sentence.

The magistrate sentenced Alonso Belza to 8 months in prison for a crime of minor coercion, 16 months for a crime of habitual abuse, 4 years and 6 months for six crimes of unusual abuse, and another 6 months in jail for a crime of injuries The lawyer will have to serve the prison sentence, since the judge has dismissed the defense's claim to impose an alternative penalty, such as fines or work for the benefit of the community.

The court understands that the lawyer "deserves the greatest criminal accusations, because at all times he was aware of the illegality of his conduct, as a lawyer specialized in the matter", and considers the facts narrated by Alonso's ex-girlfriend proven Belza, who described numerous episodes of violence from April 2016, when the lawyer, who "did not accept the idea of ​​ending their relationship" began to send messages to the woman insistently, to control her friendships and her mobile phone, to argue with her, facing and screaming in her ear, "and repeatedly to attack her."

One of those discussions was recorded by the victim, who had followed the advice of a friend and had installed a camera at his home, a test that the defense requested was annulled, but that the judge has considered lawful. In that video you can see how Alonso Belza throws his mobile phone and another object at the victim, shouts at him, slaps him on the leg, pushes and grabs her by the flap. The judgment considers that these images serve as proof of the concrete facts that can be appreciated, which occurred in November 2016, and also "of hell" lived by women "twice."

What do you think of the parental veto to complementary school activities? | Society