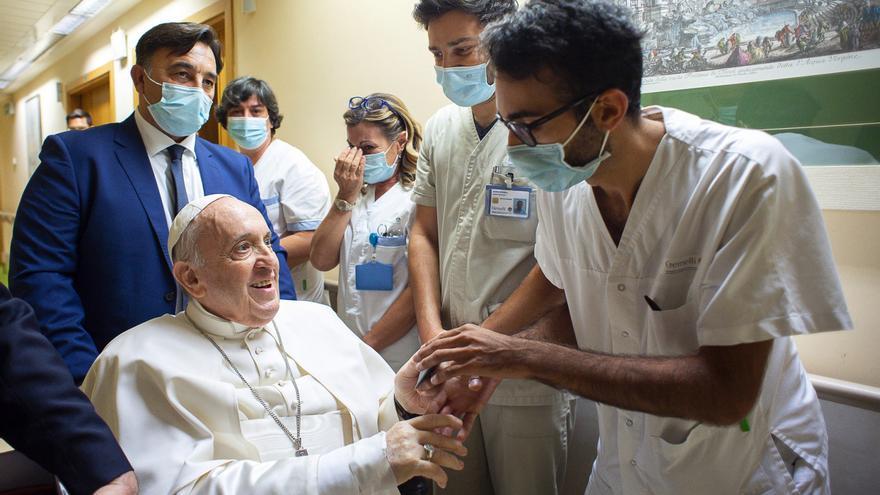 A month ago, Pope Francis entered the Gemelli Polyclinic in Rome to undergo a surgical intervention that kept him out of circulation for ten days and that has kept him away from all public activity, except for the Angelus every Sunday, which he has been celebrating since balcony of St. Peter’s square. This week, however, the hearings on Wednesdays are resumed.

The operation, a symptomatic diverticular stenosis of the colon, set off all the alarms in the Vatican and in many nunciatures around the world. The lack of transparency when reporting his health –Francisco had appeared that same morning before the faithful, announcing a forthcoming trip in September, without making the slightest reference to a scheduled admission– made many wonder if Pope was or was not really serious.

30 days later, Francisco continues with his work from his residence in Casa Santa Marta, but the debate about his health continues: is there a conclave in sight? It does not seem that Bergoglio is going to resign in the immediate future, although sources close to him assure that “the long trips are over” and that, from now on, the Pope will have to measure his efforts well. Francisco, in any case, has not stopped making decisions and in these weeks he has made two of great relevance for the present and the future: the first, prohibiting (with exceptions) the mass in Latin and turning his back to the people with the previous rite to the Council – which has unleashed the ire of the traditionalist sectors – and has allowed the beginning of the first trial in history that brings a cardinal to the bench for embezzlement of funds from the poor. On the horizon, the reform of the Curia and, in September, the beginning of a synodal process that aims to bet on the full participation of laity and women in decision-making in the Church. Something that the ultra sector is not willing to allow.

Bergoglio continues to govern, but the Vatican opposition has used the alleged papal inability to question his latest decisions (especially that of the masses in Latin), and to launch the race for his succession.

Are there candidates for a hypothetical conclave? Taking into account that it is quite unlikely that Bergoglio will resign, and much more that he will resign before Benedict XVI dies (Rome does not want to give the spectacle of “three popes”, which has not occurred within the Church since the times of Avignon schism), the candidates who, today, could lead the conservative sector are, clearly, two. The first, Cardinal Robert Sarah, until a few months ago head of the Congregation for Divine Worship, and who for years stopped Francis’s attempts to end the traditional Mass.

Sarah, 76, brings together all the support of traditionalist and conservative groups, as well as the supposed support of Benedict XVI. Together with Ratzinger, two years ago, he wrote a book, touted as written with four hands, in which he criticized the reforms in marriage and family matters that emerged in the last synods. The scandal was such that Benedict XVI had to deny his authorship and the personal secretary of the Pope Emeritus, Georg Gänswein, left the direction of the Pontifical Household. Bergoglio no longer trusted him. The abrupt departure of Sarah from the Curia (Francis has ordered an audit of the Congregation for Divine Worship), far from eliminating him as a candidate, has won him support from an important sector of immobile cardinals, who fear that Francisco, in his words, finish off the Catholic Church.

The second candidate, to this day, could not even participate in the conclave. This is the Italian Angelo Becciu, defenestrated by Francisco and currently charged in the macro-trial for embezzlement of funds from the poor for the purchase of goods abroad through companies located in tax havens. The cardinal (he retains the title, but not the functions), at 72 years old, was the “number 3” of the Vatican and responsible for the “factory of saints” in Rome until Bergoglio expelled him from the College of Cardinals, in an unprecedented decision .

As difficult as it may seem, an important curial sector, and the Italian episcopate, see in Becciu a possible candidate (especially if, as some fear, the trial ends in false and the cardinal is exonerated) to return to Europeanize the government of the Church , after eight and a half years of the first Latin American Pope. And it is that the Romans suffer, since the death of John Paul I (1978), three pontificates of a non-Italian Pope, something that had not happened since the time of Hadrian of Utrecht (16th century). And the Curia, despite the internationalization implemented by Bergoglio, continues to be dominated by Italian officials.

Between the Bergoglio candidates There are also three names, of three young cardinals, with a very social outlook, and who could complete the reforms undertaken by Francisco. The Argentine assumes that he will not finish the job he started in 2013 after being chosen by surprise. The first and clearest is the Filipino Luis Antonio Tagle (born 1957), current prefect of the Congregation for the Evangelization of Peoples (or Propaganda Fide), the “army” of missionaries and social action of the Church, and also president of Cáritas Internationalis. Known as the Red potato, the head of Vatican charity would definitely bet on a Church much more committed to the poor, and would impose, again, a Pope not from Europe. After America, it would be the turn of Asia, the largest nursery of Christians in recent decades.

In Rome, however, two other profiles are being looked at: that of the Polish Konrad Krajewsi (1963), current beggar cardinal of the Pope, who became famous a couple of years ago when he defied the Roman authorities, who had cut off the power and the water from a building full of illegal migrants and their families. The cardinal, who worked as an electrician, went down to the sewers to reconnect the electricity and water connections. The Polish cardinal has also been in charge of managing the arrival of dozens of Syrian refugees from the Moria and Lampedusa camps to the Vatican.

The third in contention is Mateo Zuppi (1955), Italian cardinal and member of the Community of Sant’Egidio, one of the most relevant social and geopolitical structures of the Catholic Church in the world, accustomed to intervening in international conflicts for decades and which in recent weeks has sounded like the institution that could take over the management of the basilica of Cuelgamuros once the Democratic Memory Law was approved, and the Benedictines were expelled from the Valley. The Archbishop of Bologna is a renowned intellectual whose experience in conflict resolution has made him one of Francis’s right-hand men when it comes to building diplomatic networks with governments around the world.

However, Francis continues to form a cardinal college in accordance with his pontificate, with the idea that it will not be he who will complete the reforms undertaken. All these candidates, and those that may arise in the future, will gain or lose in full depending on the duration of a pontificate that, despite the supposed fragility of Bergoglio’s health, seems to last for a few more years. The pools, however, are already underway, and the movement of the rigorists aims, among other things, to promote the feeling of the end of the pontificate that does not end up marrying reality. Although it is true that, for a month, Francisco has hardly been seen in public, unleashing all kinds of rumors.