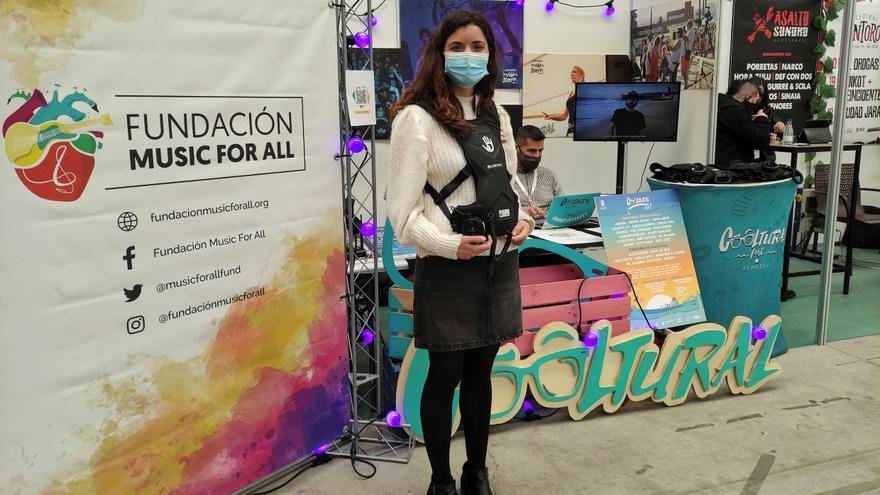 Zamora, Mar 28 (EFE) .- Offering a concert that can also be felt by people with hearing disabilities or that the visual spectacle on stage is perceived by the blind are some of the barriers that the Music for All Foundation has managed to break down.

This foundation, which fights for social inclusion through music, participates this weekend in the Lusa Hispano Music Industry Fair held in Zamora, where it has shown some of the initiatives it develops and the technological innovations it incorporates for make concerts accessible.

The foundation’s project manager, Raquel García, has shown Efe the operation of a breastplate for deaf people that vibrates to the rhythm of the music that is heard and thus makes it possible to feel the melodies of the concert, not through the ear, but through the touch.

To complete accessibility in the face of hearing impairment, magnetic loop systems are installed and a person translates the lyrics of the songs and the comments of the artists during the concert from the stage into sign language.

This method has already been successfully tested in Almería, in the Cooltural Go concert cycle, which will open a new edition starting next April that will last until the end of summer and which carries the banner of inclusion in its activities.

In an effort to eliminate barriers, in addition to using vibrating backpacks, this foundation offers programs and lyrics for the blind in Braille and audio guides at concerts that narrate the staging of musical performances.

At concerts they also ensure that there are no architectural barriers and that the bathrooms are adapted for people in wheelchairs.

Other measures implemented by this foundation include making the web pages of the concerts accessible, having preferential accesses and installing an assistance point for people with different abilities and offering accessible itineraries.

In this way, Music for all has managed to make “the first fully accessible cycle of concerts at a European level”, according to Raquel García, who has highlighted the “work for accessibility, equality and sustainability in concerts” that it develops the foundation.

The effort for full inclusion is also carried out from within the stage, by incorporating artists with some type of disability into the concert posters.

In this way, they show that there are no differences to make the audience move to the rhythm of the music if the DJ has Down syndrome or to feel the cante jondo when the flamenco singer is a person with an intellectual disability.

In addition to giving visibility and promoting access of people with disabilities or functional diversity to the music industry, the foundation uses music as a resource for socio-educational intervention and helps social inclusion through it, which gives added value to staves .