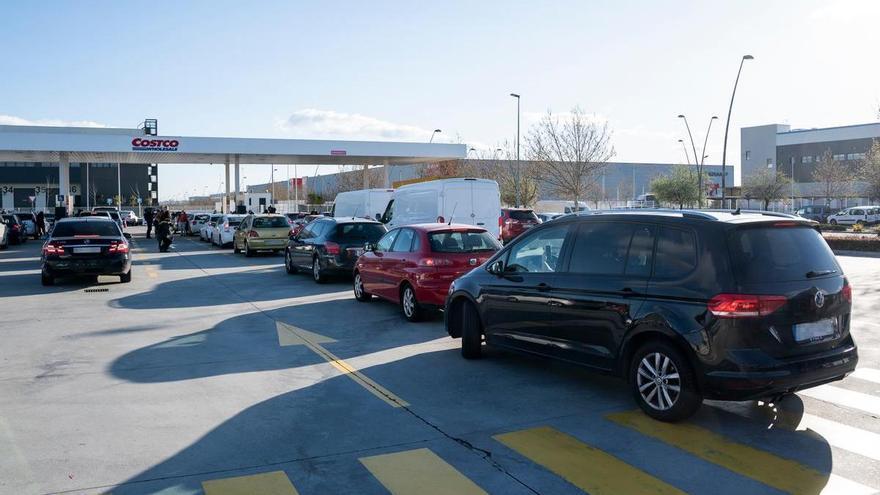 Placing and removing cones, an employee of a Repsol gas station near the Atocha station tried to control the access of vehicles, on the first day in which the discount of 20 cents per refueled liter was applied -15 at the government's expense, five in charge of the oil companies -. It was around one in the afternoon and the problems were piling up. “The whole system has crashed. [informático]”, lamented the man, who explained that the only way to avoid the queues was for the cars to access slowly. "Don't let it crash, if it's not chaos," he said, sweating.

The price at each gas station this Friday: check the cheapest gasoline in your area

Problems applying the discounts also occurred at other service stations, such as Paseo de Acacias, where some drivers waited half an hour or more to receive the refund. Some despaired, especially if they had put little fuel. Like Óscar, who had arrived on a Vespa motorcycle. “For four liters that I am going to pour, what else does it give me”, he said. The man gave up the discount so he could leave soon.

The staff was a bit nervous. The manager had left, and an employee, dedicated to promoting the company's phone app to customers queuing for checkout, was arguing with the questions. She insisted, unconvincingly, that hanging around the pumps with your mobile phone in your hand could block the hoses and it was best to leave. "That's what they told me," she justified herself.

In a tour of several establishments, there were those who preferred not to give many details of how the morning was going with that of returning the small change. "I can't speak, there are cameras," said a Cepsa worker at the Embajadores roundabout. “We have it prohibited”, excused one from Shell on the same street, closer to the Manzanares.

Others showed less suspicion, such as David, manager of a gas station, again from Cepsa, who calculated that the influx on Friday had doubled compared to a normal day. Up to 12 euros had been returned to a customer during the morning, he said. There was some confusion when paying, because the information monoliths had the price without discount, which was applied only at the checkout. "There are people who have to be stopped because they leave without waiting," explained David.

Others did come warned, but relativized the importance of the measure. "Two euros for a coffee," joked a biker at a station on the Ronda de Segovia. There, the manager of dispensers and box was Juan Carlos Agudo, 54 years old and 34 years of experience. “I have seen everything, but you are always surprised”, he explained, after saying that the day was a constant “drip” of clients, although without crowds, at least during the first part of the morning. “I always do the same thing. I have enough to work”, said another neighbor, who appreciated the discount.

Antonio, a tanker truck driver, explained while connecting the hoses next to the Segovia bridge that the company had drivers on standby in case demand multiplied, but that the start of the day had passed normally. “Although I came from unloading in El Escorial and the gas station did not have the program installed [en el ordenador]”, he opposed. Jesús, who refueled in Atocha, pointed out that he did not notice much difference, because he used to pour 10 at 10 euros of gasoline. Juan Carlos, the Segovia patrol worker, described: “The anger was days ago, [con la subida]; today people leave satisfied”.