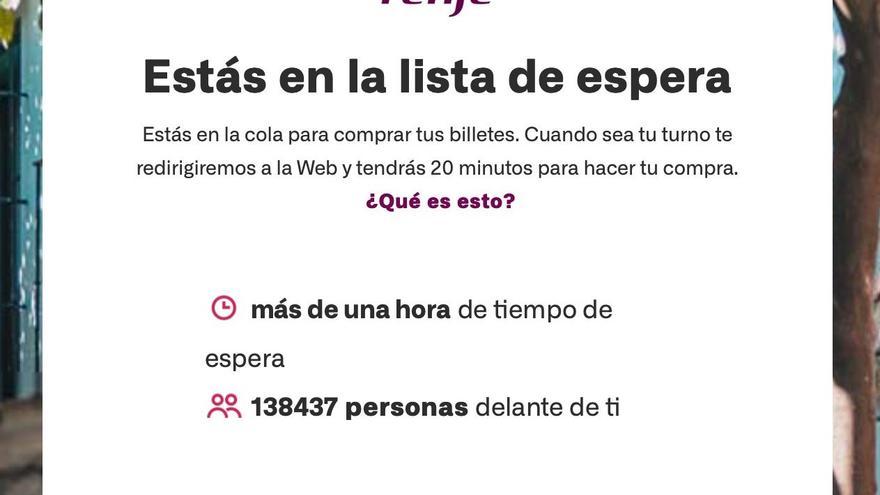 Renfe's initiative to commemorate the 30th anniversary of the birth of the first AVE between Madrid and Seville, which was put into circulation on April 21, 1992, is becoming a focus of complaints and protests. Users who want to take advantage of the offer of 15 euros per ticket have to wait hours to buy them.

Renfe had sold until 1:00 p.m. this Friday about 28,000 tickets at 15 euros each, within the framework of the promotion that it has launched to sell up to 100,000 AVE and long-distance tickets and that will last until April 24, according to Renfe sources have informed Europa Press.

🎆 🎇 ✨ Celebrate with us the anniversary of the AVE 🚄 and travel for only 1️⃣ 5️⃣ euros each way! Buy from this Friday morning until this Sunday your tickets for the months of July, August and September.

The tickets in this offer are for travel in the three summer months, between July 1 and September 30, to all national destinations.

The avalanche of users on the Renfe website has caused the purchase of tickets to translate into a wait of hours. The company advises customers trying to buy a trip of the number of users ahead and if the wait is more than an hour. Some people have shown the waiting screens on various social networks where Renfe explains that there are more than 160,000 people waiting to buy a ticket.

what of the web @renfe and the passivity of the Ministry of Transport is scandalous. pic.twitter.com/zdsptzST1f

Some travelers have protested on the networks because they believed that the offer was for these months, but Renfe tickets at 15 euros are only for trips during the months of July, August and September.

Other users have begun to complain that once the waiting screen disappears they cannot access the purchase of the ticket at 15 euros because the website gives an error.

After 3 hours of waiting to buy some renfe tickets, it gives an error 500 and the queue is reset. GG

The Renfe website is one of the most visited in all of Spain. Despite the fact that the complaints have accumulated for more than twelve years, since the possibility of buying tickets online has been active, this problem has not been solved when there are high consumption peaks, as has happened in this case. end of 2019 the train company opened a tender for 700,000 euros to renew renfe.com. The problems continue.