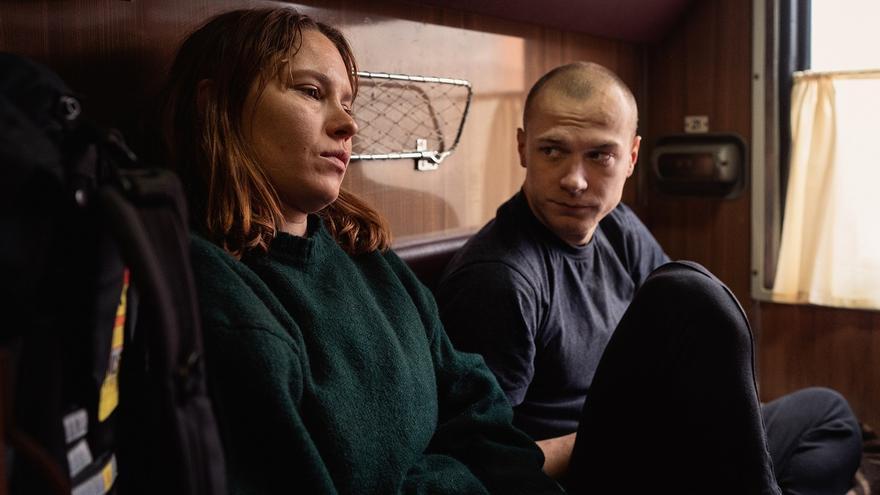 When you meet someone, numerous prejudices are involuntarily activated that cause a certain image to be formed. There are many factors: who introduces that person, where they come from, what they work in or what their tastes are. It is difficult to escape from them. Sometimes we even behave according to what is expected of each one of us. A performance unconscious to fit the label placed on us. Juho Kuosmanen's cinema has a humanist character that always tries to break down prejudices and look at people head-on, without prejudging them.

The Finnish director fell in love with his portrayal of a boxer in love in The Happiest Day in the Life of Olli Mäki and it was confirmed at the last Cannes Film Festival with his latest film, Compartimento Nº6, an adaptation of Rosa Liksom's novel with which he won the Grand Jury Prize. A film that works as a love story although there is no romantic relationship. Not a kiss. Just two strangers who meet on a long train ride through Russia after of the end of the Soviet Union. She, a Finnish woman, progressive, lesbian and modern. He, a rude, Russian, traditional and always drunk worker. Both behave as the bosses that define them dictate, and both will break down the prejudices in that compartment that gives the film its title.

Many see in Compartimento Nº6 the wicks of a romance, but the director does not believe that it is true, although he does see "a love story in the sense that both manage to feel loved at the end." "This idea of ​​love has more to do with the idea of ​​freeing oneself, of the idea that one has of what it should be. It is a love story in which there is no future love. They do not want to live together. It is a love that gives you the possibility to show yourself as you are because you have no one to please in front of you. You have no one to impress, and this happens when you free yourself from the romantic idea of ​​how a man or a woman should behave, " Kuosmanen tells.

On this journey, they see themselves as they really are, far from conditioned first impressions. "When you see a person, you are normally trying to guess what he is like, and in that way we immediately narrow his possibility of existing as a human being. If we already know that this man is Russian and working class, that definition narrows his possibility of existing as a human being. human being. These roles are constructed out of our prejudices. When we see a Russian, masculine, working-class person, we have an idea that immediately comes to mind that he is not the person in front of us. There can be no connection , an encounter, as long as we see ourselves as representatives of a specific nationality or working class. What is nice about these long train journeys is that there is time to see beyond those roles", explains the director about his film.

Compartment No. 6 arrives in the midst of the war caused by Russia's invasion of Ukraine: "Obviously I am very sad about this Russian terror that is happening in Ukraine. As for our film, I think it has a more intense content at this time, and even more difficult for some viewers, because the idea that we have of the Russian people has been clouded by this war, and I think this idea is very important, because otherwise we would only hate. The way I see it, see everyone Russians as evil gets us nowhere. I think this humanist idea is stronger right now than it was before."

It confirms that humanistic vision of his films, a quality that Juho Kuosmanen considers inherent to cinema. "That is its essence, the ability to see human beings. Cinema is a way of thinking about human behavior and of empathizing, of seeing the other, of seeing through their eyes. In that sense, the essence of cinema , for me, is humanistic, and much more so than any other form of art".

In Rosa Liksom's book he found "atmosphere, melancholy and that encounter with the other". She is also a "simplicity" that she likes and that she believes helps the movies "go deep." There is a fundamental change in history. While the book takes place in the 80s, with the Soviet Union in force, the film takes place in the 90s. A decision that has to do with production reasons. "It was easier to find locations from the 90s, but in the Soviet Union everything was different," confesses Kuosmanen. But also because the book "talks about the USSR as a state of mind", while its script focused more on the relationship of the two protagonists: "If I didn't talk about that, I felt that setting it in the 90s made it freer. If you set a film in the Soviet Union you have a very specific idea of ​​how it should be, but if we put it in Russia we could more easily focus on human beings, because if it were in the 80s, everything that happened would be affected by that context ".