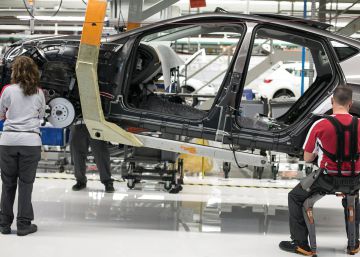 Although with effort and in a heterogeneous way, companies have managed to improve their financial health. Vulnerable companies, that is, those that with their operational benefits fail to pay financial expenses, have been reduced by 20 points since the peak of the Great Recession. Currently, they represent 22.8% of the total debt of Spanish companies, compared to 42.3% in 2009. The percentage of profits that companies devote to deleveraging has also been consistently reduced: 33.2% in 2018, compared to 72.2% a decade ago. The reasons are not only found in the improvements of the economy; also the fall in interest rates has given a boost for the business sector to clean up its accounts, according to the report Financial conditions of Spanish companies, prepared by the BBVA Foundation and the Valencian Institute of Economic Research (Ivie) and published this Thursday.

The study, led by Ivie researchers Joaquín Maudos and Juan Fernández de Guevara, points out that the consolidated debt of the companies reached dizzying figures after the crisis broke out. In 2010, it touched a maximum of 118% of the GDP, equivalent to 1.2 billion euros. In other words: companies would have had to allocate 5.4 years of benefit to amortize it. Last June, this percentage had dropped to 73%, 4.3 points below the eurozone average.

However, these improvements have not been uniform for the whole business fabric. The report highlights that this group of vulnerable companies has managed to survive especially thanks to the oxygen balloon that has been the expansionary monetary policy of the European Central Bank. Thanks to the reduction in interest rates, which makes their financial obligations more affordable, these companies have been able to stay afloat, something that would not have been possible in a normal rate environment.

Also the size causes the effects of recovery to be uneven. Smaller companies have the most difficulties in accessing financing. Although this variable has improved markedly since the crisis – in 2018, only 8% of companies had problems getting bank loans, compared to 25% in 2011 – almost a quarter of microenterprises in 2017 were unable to finance their investment without outside resources, and more than half managed to do it with difficulty. In the case of large companies, those of more than 250 workers, these figures are reduced, respectively, to 6% and 39%.

According to the report, these restrictions suppose a brake for companies that is reflected in the Spanish economy as a whole, as the size of the investment is reduced and, with it, productivity.

The study of BBVA and Ivie echoes the numerous studies promoted by different organizations in the wake of the financial crisis on how the obstacles to access to financing and indebtedness have consequences on investment or productivity. "Basically, it is conjectured that the recent slow progress in productivity may be related to the functioning of financial markets," he says. "These may have contributed to a lack of investment in the years of crisis and an inefficient allocation of productive resources." This scenario, he adds, has resulted in the permanence of "zombie companies, the lack of growth of the most productive companies, or the investment in capital goods – such as real estate – that do not maximize the possibilities of long-term growth."

Companies with more difficulties and more access to financing have a lower investment rate than those that can achieve it without difficulties. On the other hand, 74.9% of companies whose gross investment does not cover the amortization of fixed assets presents some type of financial restriction.

This different access to financing has an impact on productivity. The report points out that indebtedness can only be improved if the red numbers that the company accumulates have served to finance investments that increase efficiency, but if these reach excessive levels the effect can be counterproductive. Specifically, the report sets a threshold of 38%. "From that level of indebtedness, the profits obtained are being lost," says the study, which indicates that in 2017 69% of Spanish companies were in this situation, with a consequent negative effect on productivity.