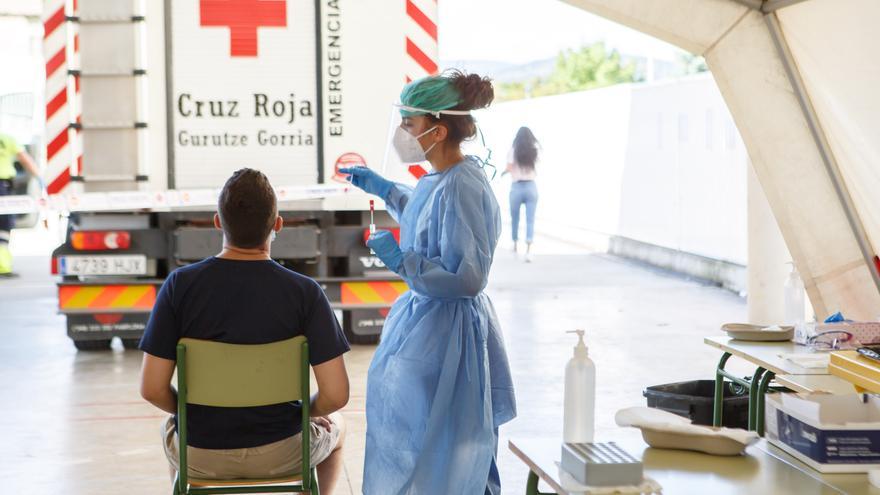 Spain has returned to beat this Friday its record of new infections daily of coronavirus registered by Health and is already the fifth country in the world that has registered the most new cases in the last seven days. The situation is not the same throughout the territory, but more than half of the Spanish provinces have registered a strong increase in cases in the last two weeks that has forced several communities to implement new restrictions to try to stop the second wave of the pandemic and cut the chains of transmission.

This Saturday has come into force in Navarre a new pack of limitations and restrictions to try to stop the increase in COVID-19 cases that has placed the Autonomous Community in the highest daily numbers of new infections since the start of the pandemic with more than 300 cases over three days in a row. Among the new measures, which will remain active for at least 15 days, is the reduction to six of the maximum number of people who may meet in the public sphere and in catering establishments. The capacity of social activities is also limited to 50% and to 60% in cultural events. In addition, bar consumption will be allowed exclusively until 12 noon and the sale of alcohol is prohibited after 10 pm, except in catering establishments.

Along with these restrictions, the Government of Navarra has also decided to significantly increase the amount of fines for non-compliance with sanitary measures: not wearing a mask becomes penalized with 300 euros (before 100) and participation in bottles will be sanctioned with a minimum of 600 euros. For now, there is no municipality confined to the Autonomous Community, although the regional government does not discard it in the future if necessary. For now, they are limiting themselves to mass screening in those locations where there has been a large increase in cases, such as the one carried out in the municipality of Leitza, which produced 35 infections.

In Balearics, the Official Gazette of the community has published this Saturday the new restrictions approved by the island government to stop contagions, which include the suspension of fairs, popular festivals and festivals and the limitation of capacity to 50% in cinemas, theaters and auditoriums with pre-assigned seats. In order to stop the increase in cases registered in recent weeks in Palma, and from 10:00 p.m. this Friday, the neighborhoods of Son Gotleu, Son Canals, Can Capes and Soledat Nord, where more than 22,000 people live, have been confined. . In addition, the City Council of the capital has sealed all the parks and children’s areas.

In Estremadura, where the province of Badajoz has registered a strong increase in cases in the last two weeks, this Saturday the municipalities of Casar de Cáceres, Cabeza del Buey and La Haba have regressed to phase 2 of the de-escalation to try to prevent a community transmission of the outbreaks registered in these localities. The Extremadura community the number of hospitalizations has doubled in the last week by registering 83 people admitted of which 11 are in the ICU.

In Murcia, one of the regions most affected by the increase in cases, the regional government has decided to confine this week the municipality of Jumilla after exceeding 700 cases per 100,000 inhabitants and establishing a flexible phase 1 in which a return to telematics school is imposed, affecting almost 5,000 students. Archivel, a district of Caravaca de la Cruz, is also confined.

In Cantabria, the Government has imposed this Friday a sanitary cordon to five streets of the neighborhood of La Inmobiliaria in Torrelavega, with 6,500 affected by an uncontrolled outbreak that is trying to contain by carrying out massive tests to slow transmission. An attempt is made to follow the steps of Santoña, a municipality in which the confinement is managing to stop the contagion curve.

Other municipalities extend the confinement that was already in force. This is the case of Benigànim, of the Valencian Community, than will be 7 days more with exceptional measures to, in any case, allow the circulation of residents within the municipality. According to the minister, Ana Barceló, “the epidemiological situation has improved, although not enough to lift the measures adopted to contain and prevent the virus.”

In Aragon One locality is of particular concern: Andorra, in Teruel, where a total of 69 cases have been registered, which represents an incidence in the municipality of about 800 cases per 100,000 inhabitants. In this way, as happened with the municipality of Ejea de los Caballeros, an order restricting free entry and exit has been issued for 7 days.

In other communities there have been no confinements, but stricter restriction measures have been put in place. It is the case of Galicia, where the Xunta has hardened since this Saturday the regulations against the coronavirus in five municipalities in Pontevedra and one in A Coruña. They join ten other Galician municipalities where these measures were already in force. Similarly, in Canary Islands The special restrictions imposed on the islands of Gran Canaria and Lanzarote are extended for two more weeks, for having exceeded the rate of 100 cases per 100,000 inhabitants in the last week. The measures involve limiting meetings to 10 people, closing bars and restaurants at midnight and closing non-occupational day centers.

In Castile and Leon Special regulations also came into force in Valladolid and Salamanca, cities that are governed by practically the same measures as in phase 1 of the de-escalation. And, if the situation does not improve in those places, as it is happening, the regional government does not rule out resorting to the state of alarm to tighten restrictions. It is what happens in Melilla, where requesting the state of alarm “as a legal umbrella” to adopt measures to control the transmission of COVID-19 due to the increase in cases that rise to 362 in the autonomous city.

As in other communities, the Ministry of Health of Castilla la Mancha has spread in the last week the special measures imposed in Toledo and several municipalities in its surroundings throughout the province and Integrated Management Area of ​​Ciudad Real, made up of a score of towns. In both cases, these are rules that, as usual, imply the reduction of capacity and social events.

Andalusia, where the first wave of the pandemic caused less damage than in other territories, has seen a strong growth in cases in recent weeks. Since September 1, an order has been in force that calls for the closure of day centers based on a scale of cases that is close to being reached at different points. The Rioja Alfaro has been forced to confine this week after exceeding 2,000 active cases per 100,000 inhabitants. Asturias, which continues to be the community with the lowest incidence of the virus, keeps active the measures of the new normality, reinforced after the agreement reached between Health and the autonomous communities in August.

Catalunya It was one of the first communities to apply more severe restrictions at the start of the second wave in July. The situation in Lleida and the metropolitan area of ​​Barcelona led the Generalitat to suspend nightlife and carry out perimeter confinements in several municipalities that made it possible to control the community transmission chains registered in various areas. Since then, the situation has improved notably in Lleida and has been controlled in other areas, such as Barcelona. Euskadi, with its three provinces in the top five by number of cases among 100,000 inhabitants in the last 14 days and a strong growth in infections in Gipuzkoa, has not added new restrictions in recent days to those already in place since August.

Meanwhile, the Madrid’s community, which is at the head of coronavirus infections in the country and is the territory with the highest incidence in the European Union, rules out confinements for the moment. Last Monday they came into force the new restrictions announced by the government headed by Isabel Díaz Ayuso a week before. The measures limit meetings in public and private spaces to ten people, reduce the capacity of the bars of the bars without changing the capacity limit inside the restaurants and restrict some social events such as bullfighting celebrations.

News prepared with information from the regional editions of elDiario.es.