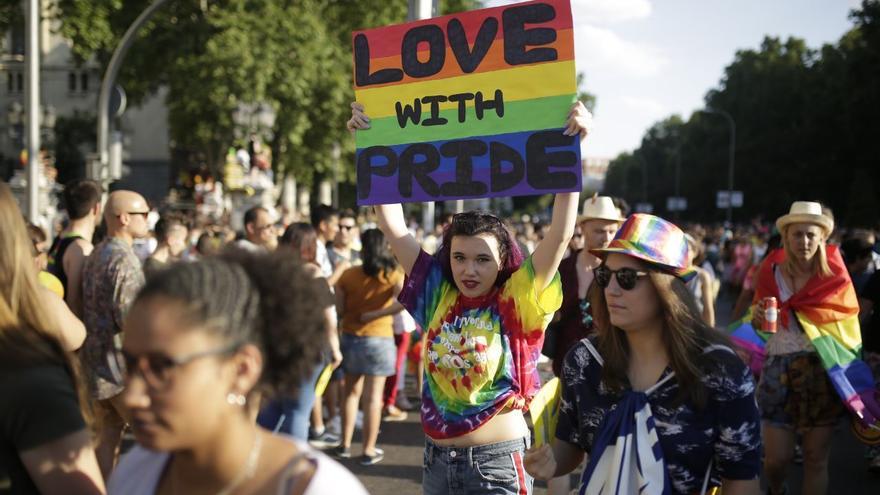 Juan Pablo recently joined a group of pensioners in his neighbourhood, in La Latina in Madrid. They defend decent pensions and public health, but between meetings there are frequent conversations about their grandchildren or what they have done over the weekend. "I haven't talked about anything personal at the moment. You have to think about whether it's worth it to you...", reflects this 75-year-old gay man. Born in the midst of Franco's dictatorship, when homosexuality was considered a crime, this man from Madrid decided not long ago to show himself to his surroundings as it is, but the coming out of the closet still continues.

It is not something exceptional. The usual thing when talking about the visibility of LGTBI people is to do it as a one-off event, which occurs in front of family and friends; that begins at a given time and ends. However, the reality is that something does not end. "You have to understand that when we talk about "Coming Out of the Closet" we usually refer to the first one, but later there are successive ones and they usually happen in relation to some change: new social, educational, neighborhood, new job... it is to continue coming out of the closet throughout life", explains Ignacio Paredero, organizational secretary of the State Federation of Lesbians, Gays, Trans and Bisexuals (FELGTB).

The available data suggests that LGTBI people tend to be selectively out of the closet. The vast majority are not fully involved either with the family or at work, according to the largest survey carried out so far by the European Union Agency for Fundamental Rights (FRA): in the workplace, less than half (41%) claim to be visible (as gay, lesbian, bisexual or trans) with all or most of their peers, while with the family the percentage increases to 47%. With friendships, the degree of openness scales considerably and stands at 75%.

Reality has evolved and proof of this is the experience of people like Juan Pablo, who lived for decades between silence, discretion and dissimulation. But even so, the so-called presumption of heterosexuality has not disappeared, that is, conceiving a priori that this is a person's orientation until proven otherwise. "It's not that there is a majority rejection, but in almost all spaces it is taken for granted and then you have to say 'no, no, it's that I...'. And on the contrary, heterosexuality is exposed all the time without realize, when talking, for example, about the family", thinks Juan Pablo.

Ana Ojea, a teacher at an institute in Vigo, abounds in the same idea: "We have improved as a society and by making ourselves visible, adverse reactions are not allowed or are very rare, but the phenomenon of assuming 'by default' that we are all heterosexual continues too present in everyday life, although an increasing number of people take care of these details". In his experience, one of the situations in which he most frequently has been this coming out of the closet that lasts throughout life It has been in the gynecological consultation, where the questions she has been asked are clearly directed at heterosexual women. "Every time I've changed professionals I've had to specify it," he says.

Precisely to try to "break with the dynamic of presumption of heterosexuality", Ojea makes herself visible as a lesbian teacher every first day of the course in front of her students as a way of "making it easier for those who want to to do so safely". In addition, he asks them their name and what pronoun to address them with (he, she or she, in reference to non-binary people) because, he assures, the presumption also occurs in relation to gender identity. Paredero, from the FELGTB, also points this out: "There is a tendency to assume without knowing that the others are cis people", that is, that they are not trans and whose gender coincides with the one assigned at birth.

Ana G. Fernández came out of the closet with her parents at the age of 18, but "they did not receive it very well." Time passed and there was part of the family that did not tell, despite being close, until last year, when he became visible with his godparents. His case shows that coming out of the closet can take a long time and that for LGTBI people the risk of re-entering it in new areas is always present. "It's incredibly difficult to get out, but very easy to get back in," says the 33-year-old and president of the Association for Affective and Sexual Freedom (ALAS) of A Coruña.

It's something that even people who, like her, are on the front lines of activism go through: "A lot of people who seem to be very visible, there are actually times when we quickly go back into the closet." Although she is professionally dedicated to the audiovisual field, it has happened to her in some sporadic job that she has had as a telemarketer: "You think about it because you don't know very well what environment you are in, you have to read it first, know how your bosses breathe... The coming out of the closet that we usually talk about is always the first, but then there are closets that you have to go in and out of constantly".

And it happens even in advanced ages, like that of Juan Pablo. According to a study by the FELGTB on older people in the group, visibility falls after 50, that is, many return to the closet from that age range. A space in which it happens and which is especially feared by the elderly LGTBI are the residences for the elderly: "It is something that we talk about a lot. It may be an explicit rejection or also that they are spaces in which this is not named or is not makes them inclusive", reflects Juan Pablo, a member of the group of older people of the COGAM collective.

The first coming out of the closet, with the closest and most intimate circle, is usually the most difficult, the voices consulted for this report agree, because "it usually occurs at younger ages and there is usually fear that your loved ones will react negatively ", specifies Ana Ojea. The following ones, the ones that continue to happen, become more routine, almost a custom, but still "it doesn't mean that the person can experience it as a stressful moment because you can never know how others are going to react," believes Paredero, who focuses on the escalation of LGTBIphobic attacks that have been registered in the last year.

Ojea also refers to this "fear" that occurs on occasions, but above all he considers that the consequences of "having to constantly make oneself visible" are "tiredness and boredom"; and, in fact, sometimes "you prefer to opt for silence because it sometimes becomes violent to have to show your intimacy to people with whom you don't feel like it," settles the teacher.