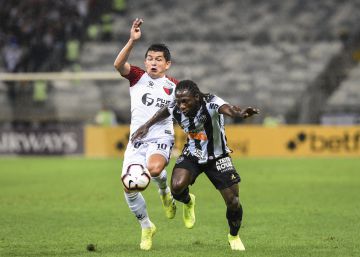 Tragedy, according to Aristotle, has a cathartic function. The spectator contemplates the hero's mistakes, usually related to a challenge superior to his forces (he faces destiny or the gods), and attends his final punishment. Catharsis would become a purifying phenomenon. The public suffers with the hero and draws from it a teaching, or at least a powerful experience.

People linked to small teams, like this writer, are so made up of cathartic evenings that we end up taking pleasure in tragedy. We know well the physical symptoms of failure, quite similar to those of hypothermia. And we even think that those severe lessons serve something.

At the beginning of October the composition of a dramatic night was evoked in this space. It was one in which the Club Atlético Colón de Santa Fe, a modest entity of the Argentine interior with 114 years of history and no trophy in the showcases, surpassed the Brazilian Atlético Mineiro on penalties and reached the final of the South American Cup. That of the smiling penalty of flea Rodriguez, a 34-year-old player, often and smoothly with the ball. It was the night when Columbus challenged fate.

Awful things have happened to Columbus. By 1992, with just 2,500 members and in Second, it touched bankruptcy and extinction. In 2003, the Salado River flooded Santa Fe and left the Elephant Cemetery in a dilapidated state, as they call the Colón Stadium since in 1964 it saw a local victory against Santos de Pelé. In 2011, his players dared to tempt divine wrath. As Andrés Burgo had a few days agoThey decided that a large statue of the Virgin of Guadalupe presiding over the stadium carried mufa, or badge; They took her off her pedestal and made her disappear. It is believed that it ended up in the Paraná River. There was a scandal in Santa Fe, because the Mexican virgin of Guadalupe is very revered in the city, and to avoid greater evils the club was forced to buy and install a new statue. In sports, it served little. It is not known if the Guadalupe that rests at the bottom of the river or the one that now blesses the Cemetery of the Elephants had something to do, but Columbus went down to Second in 2014.

The dreamed final of the Copa Sudamericana was held on Saturday in Asunción, the Paraguayan capital, very close to Santa Fe. La Nueva Olla, the stadium where Cerro Porteño usually plays, was filled by safes from Santa Fe. Those of Columbus are called sabaleros for fishing to keep them in the river. The atmosphere, in any case, was thunderously red and black. The rival, the Ecuadorian Independiente del Valle, barely brought a handful of followers. It was a first sign that tragedy was coming: an environment that was too favorable.

The second signal, of an almost cosmic power, has already started the game. A rain storm forced to interrupt the game for half an hour. The water, which flooded the Cemetery of the Elephants, which covers the old religious statue at the bottom of the Paraná, softened the footballers of Columbus and left a fast lawn, ideal for the fast extremes of Independiente. Ecuadorians scored twice. But it wasn't all said yet. The final sign was that the flea Rodriguez, the humble petiso respected by all the swollen Argentines, the kid who lit the semifinal with his smile, failed a penalty. There it all ended. The final result was 3-1.

More than 35,000 sabaleros did what the losers do: return home quietly and with symptoms of hypothermia. The lesson of a tragedy is never clear, but it is useless. Insurance. If not, certain defeats would be unbearable.