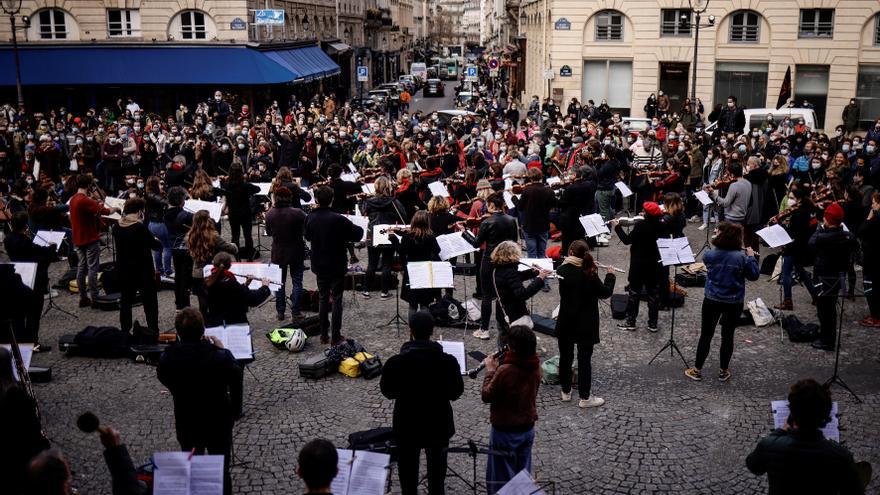 Paris, Mar 27 (EFE) .- Classical music and Colombian cumbia, along with ballet and theater, were on the menu of an open-air concert, in front of the busy Odeón Theater in Paris, in support of the world of culture, closed in France since the end of October.

Several hundred people attended the concert, promoted on social networks and which was carried out with the police presence to observe that the distancing and protection measures were guaranteed, the respect of which the organizers repeatedly requested.

A classical group made up of interpreters from the Philharmonic and Paris Opera orchestras, and from the National Conservatory of Music, performed classical pieces.

There was also classical singing, poetry reading, a brief theatrical performance and as a contemporary ballet by dancers from the National Conservatory of Dance.

The concert showed support for the occupation of the Odeon Theater, one of the most famous in France, as well as about eighty other theater halls throughout the country, occupations carried out by workers from the world of culture in defense of their sector.

Theaters, museums, cinemas and concert halls have been closed in France since the end of October, when the second lockdown began, and the protest defends the cultural sector as essential for the population.

“We have been practically a year” without being able to act, with very few performances between the two confinements, the Colombian Fabián Suárez, founder and one of the five members of “Cumbia y Cardón”, a group created in Paris in 2015, lamented in statements to Efe.

Several activists taped themselves to the columns on the front of the theater with slogans painted on the skin against the continuation of the closure to the cultural world.