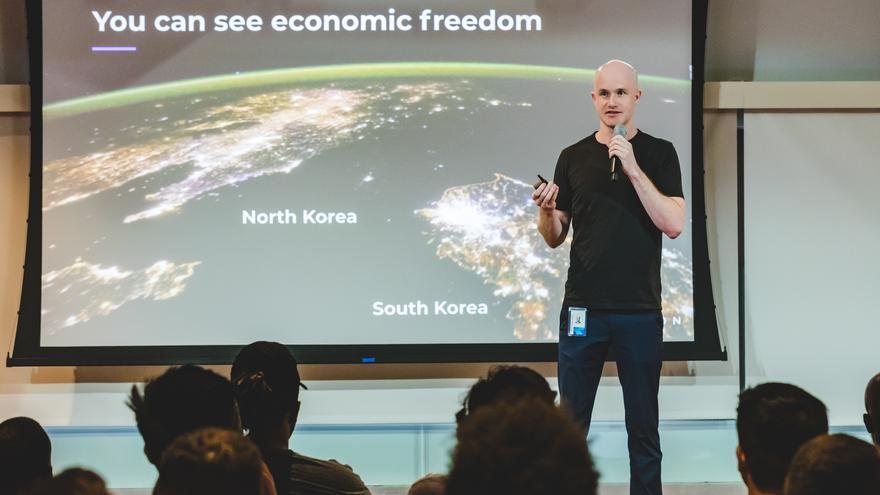 The cryptocurrency market has not stopped heating up in the last year and digital currencies such as Bitcoin have reached highs in their prices in recent weeks. Investors, some seasoned and some not, are approaching this product as supervisors begin to worry about the rise of a product that carries great risks. In this context, one of the largest companies in the world in the intermediation for the sale of cryptocurrencies, Coinbase, prepares its IPO in New York with which it could reach a valuation above 50,000 million euros.

The American company was born in 2012 in San Francisco (California) and since then it has been increasing its value in different rounds of financing in which there has been Spanish participation. In 2015, BBVA’s venture capital fund participated in a financing round of 75 million dollars, so that today it would have a small stake in the group that, as reported by Cinco Días, it would not reach 5%. Now, nine years after being born, Coinbase is preparing to debut on the stock market in the heat of growing interest in cryptocurrencies.

It is one of the most anticipated operations in the US markets and, although it has not yet set a date for its stock market debut, the company has already filed the brochure a few days ago at the SEC, the US equivalent of the Spanish CNMV, which has been extended this week. This document is the one that must be delivered by all companies that intend to go out to the markets, showing in depth all the financial information and their balance sheet. It also brings to light a list of risks to which the investor interested in betting on this company is exposed and, beyond those directly linked to the company, it involves a fairly extensive analysis of the uncertainties of the cryptocurrency business.

The main one of these risks is that of volatility. Coinbase recognizes in the aforementioned document that it is a business with a “highly volatile nature”. That is, it suffers from abrupt changes in value, which may be an indication of high speculation, and gives an example. The average value of the assets that its platform manages (mainly Bitcoin and Ethereum) rose 73% between the last quarter of 2019 and the first of 2020 and then plunged 36% in a matter of weeks. And it warns that past results should not be relied upon “as an indication of their future performance”, in reference to the good performance of these assets. “The trading of any crypto asset is subject to significant uncertainty and volatility (…) with erratic and abrupt price changes,” he stresses. A bitcoin, the best-known currency, is around 49,000 euros, a value 10 times higher than it was a year ago.

Precisely volatility has been one of the points that led to the Bank of Spain and the CNMV to issue a joint statement a few weeks ago to warn of the risks of investing in cryptocurrencies. “Their extreme volatility, complexity and lack of transparency make them a high-risk gamble,” said banking and securities supervisors. They explained that the prices of cryptocurrencies are formed in the absence of effective mechanisms that prevent their manipulation, such as those present in regulated securities markets. In many cases there is no public information to support the prices that are set.

It should be remembered that, although they are called cryptocurrencies, the truth is that their use for the sale of goods is quite limited and that is not expected to change in the near future, so it has become an investment product rather than an currency to make transactions on the internet.

Regulation is another aspect recognized by Coinbase as a risk factor for the cryptocurrency business. “The regulations do not contemplate or address unique problems associated with the cryptoeconomy, they are subject to significant uncertainty and vary widely between jurisdictions,” the company notes in the document it has released to go public. He goes one step further and notes that companies like his apply the rules “using our judgment” and “government agencies and regulators may not agree with our conclusions.”

In this way, it recognizes that to the extent that the new regulations are specified or the interpretation of this type of assets is changed, it may affect its business model. Both the US, its main market, and lhe European Union is working on standards to include restrictions and requirements that serve to protect consumer rights. “This can have an adverse impact on the development of cryptoeconomics as a whole and in our legal and regulatory status, “says the company, which warns that a change in the regulatory framework may raise its costs.

Coinbase managed at the end of last year 90,000 million dollars (more than 75,000 million euros) in crypto assets that, as it recognizes, “are not insured or guaranteed by any government or government agency.” In other words, if there is a problem that affects these savings, instruments such as the Deposit Guarantee Fund that works in Spain would not come into play if a bank collapses. “Our inability to safeguard and manage our clients’ fiat currencies and crypto assets could have an adverse impact on our business, operating results and financial condition,” the company underscores among the risks.

One of the warnings that have historically been made about cryptocurrencies is that their use may be linked to criminal activities, since they are assets that are not monitored or controlled by government agencies. This possibility is admitted by Coinbase in the document on its IPO. “Our platform can be exploited to facilitate illegal activity, including fraud, money laundering, gambling, tax evasion and scams,” he says, adding that it can be “difficult or impossible” for the company. come up with this type of operation.

According to Coinbase itself, they work with crypto assets that “hide the identities of the sender and the receiver, and can prevent law enforcement officials from tracking the source of funds on the blockchain.” This exposes the company itself to risks such as being involved in legal cases and, although it ensures that it has a risk management and compliance framework to avoid these cases, it “cannot guarantee” that these illegal activities will not occur.

Finally, among the many risks detailed in the document, some of them common to practically any company that goes to the market, Coinbase recognizes that a critical public debate with cryptocurrencies will affect its business. “Unfavorable media coverage could put our business at risk,” the company notes. This section includes the “unpredictable” coverage you receive on social networks as well as “advertising and negative events related to the crypto economy.” Likewise, it assumes that problems such as the use of the platform for criminal activities or “the decrease in user confidence” would cause a drop in the company’s results.

Coinbase had a turnover of 1,140 million dollars in 2020 and obtained 322 million dollars of profit. It has 43 million registered users on its platform after having grown more than 30% in 2020, the year of the pandemic. Of these, only 2.8 million make transactions each month, as shown in the data that the company presents to the market. As reported by Reuters, the value of the company has multiplied by 13 in recent months, in the heat of the increase in value of Bitcoin.