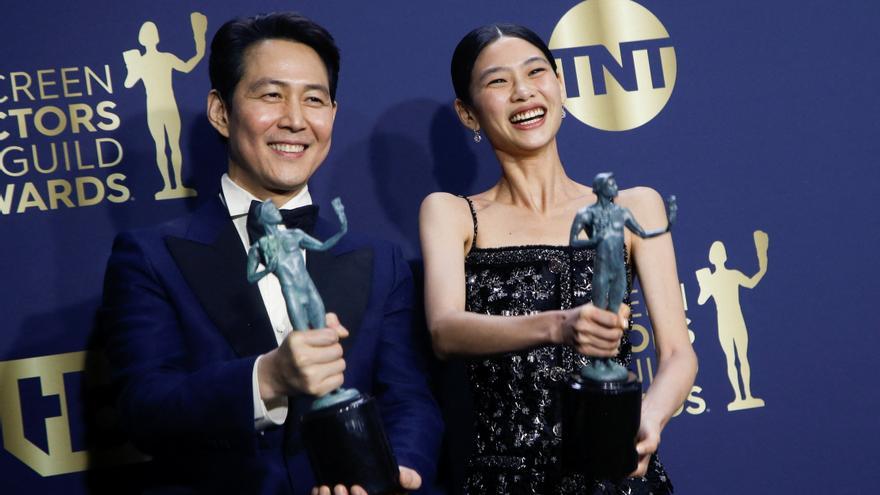 The film "CODA" won the most important awardthe best cast or cast, in the twenty-eighth edition of the Screen Actors Guild Awards (SAG Awards, in English) held tonight at The Angels.

The actors' guild wanted to recognize this production that features a cast of mostly deaf interpreters and what he acquired Manzana last year for $25 million.

The film, which is about a daughter of deaf parents who is fond of music, competed this Sunday to get the aforementioned award with the movies "Belfast" (Focus Features), "Don't Look Up" (Netflix), "House of Gucci" (MGM/United Artists Releasing) and "King Richard" (Warner Bros).

The cast of "CODA" was shown "grateful" for being able to give visibility to the group of deaf people and received the award transmitting in sign language an "I love you" that the rest of the attendees at the ceremony replied.

"CODA" also aspires to win the award for best film in this edition of the Oscar and it has already achieved recognition at the prestigious Sundance independent film festival in 2021, when it won the award from the jury and the public.

These awards, which usually function as a thermometer of what will happen at the Oscars, they also honored Jessica Chastain and Will Smithas best actor and leading actress, for their respective performances in "The Eyes of Tammy Faye" and "King Richard".

Chastain referred to the film that has earned her this award as a production that has marked her career as an actress while he praised his team for "working so freely".

During his award reception, Smith said the film is based on the story of "a man with the power to make something impossible possible"; in allusion to Richard Williams, father of tennis players Venus and Serena Williams and whom he brings to life in the film.

In the secondary categories, they were awarded Troy Kotsur for his role in the triumphant film of the night: "CODA"; and Ariana DeBose who put a Latin accent on the ceremony with his award for "West Side Story."

Thus, the Actors Guild Awards returned in a more extensive format, in person after the worst moments of the pandemic, and with repeated requests for the cessation of the ukrainian war.

The SAG Awards reflect the cinematographic bets of the course for the approximately 120,000 members that make up the most important union in the audiovisual industry.

'Ted Lasso' and 'The Squid Game', awarded in the television section

During this event, prizes are also awarded to the most outstanding works on the small screen, which on this occasion they went to "Sucession", as best dramatic series; and in "Ted Lasso", in the section of best comedy series.

From the production of Apple TV Plus "Ted Lasso" also came out Best Actor in a Comedy Series: Jason Sudeikis.

For his part, the recognition for best actor in a dramatic series went to Lee Jung-Jae for "The Squid Game", which this year broke records as the most successful production originally created by platform Netflix.

An award that, in its female version, also won her co-star Jung Ho-yeon ("The Squid Game").

Finally, Kate Winslet She won Best Actress in a Limited Series (Miniseries) for her performance in "Mare of Easttown"; and Michael Keaton did the same with his role in "dopesick".