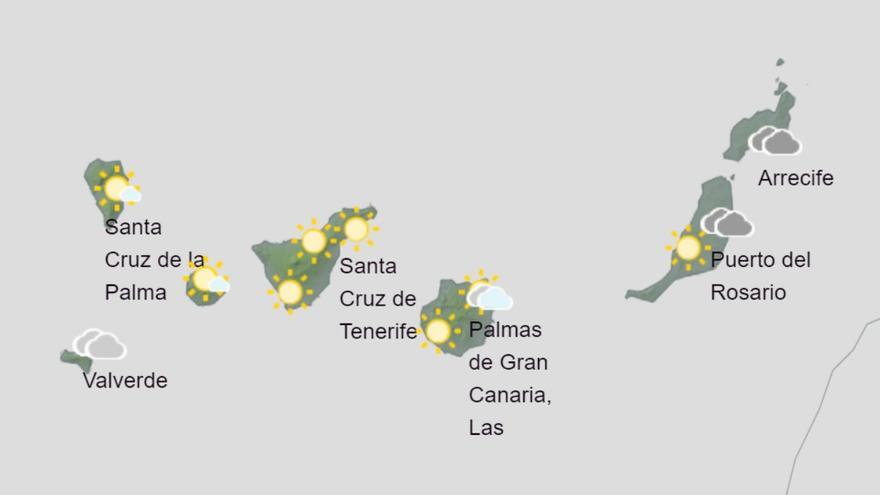 The skies will present cloudy intervals this Tuesday in Lanzarote, Fuerteventura and north of the islands of greater relief, with the possibility of rain in the eastern ones, the minimum temperatures will increase in Lanzarote and Fuerteventura and the wind will be from the northeast, weak to moderate.

Regarding the state of the sea, it announces wind from the east or northeast of force 3 or 4, 4 or 5 and occasionally 6 in northwest, southeast and north and south of Lanzarote, swell and swell, and variable winds of force 2 or 3 in the southeast, curly sea and marejadilla, as well as a swell from the northwest with waves of 1 to 2 meters

The weather forecast for this Tuesday, by islands, is as follows:

Cloudy intervals. Little chance of light and scattered rain in the north, more likely during the early morning and at night. Minimum temperatures in slight increase and maximums with few changes. Northeast wind.

Cloudy intervals, opening up clear in central hours. In the north, in the early hours of the morning, little probability of weak and scattered rain. Minimum temperatures in slight increase and maximums with few changes. Northeast wind.

In the north and east coasts, cloudy intervals, in the rest, clear or slightly cloudy with intervals of high clouds at the end of the afternoon. Temperatures with little change. Northeast wind, more intense on southeast and northwest coasts.

In the morning, in the northeast, cloudy intervals, in the rest of the island little cloudy. In the afternoon, cloudy on the north and east slopes, and the rest slightly cloudy accompanied by intervals of high clouds. Temperatures with little change. Northeast wind, more intense on southeast coasts and northwest tip. On peaks, light wind.

In the north, cloudy intervals. In the south, little cloudy. In the late afternoon, intervals of high clouds. Temperatures with little change. North wind, more intense in east and northwest points.

On the north and east coasts, cloudy towards the end of the afternoon, in the rest slightly cloudy accompanied by intervals of high clouds, more frequent in the afternoon. In case of continuing the emission of ash from the volcano; Above the inversion, it will be found in a column with a variable loose wind, so it is expected that the dispersion will be small and with a certain tendency to move towards the east. Below the inversion (900-1200 meters) it will adapt to the circulation of the breezes. Temperatures with little change. Northeast wind, more intense in southeast and northwest points. On peaks, light wind.