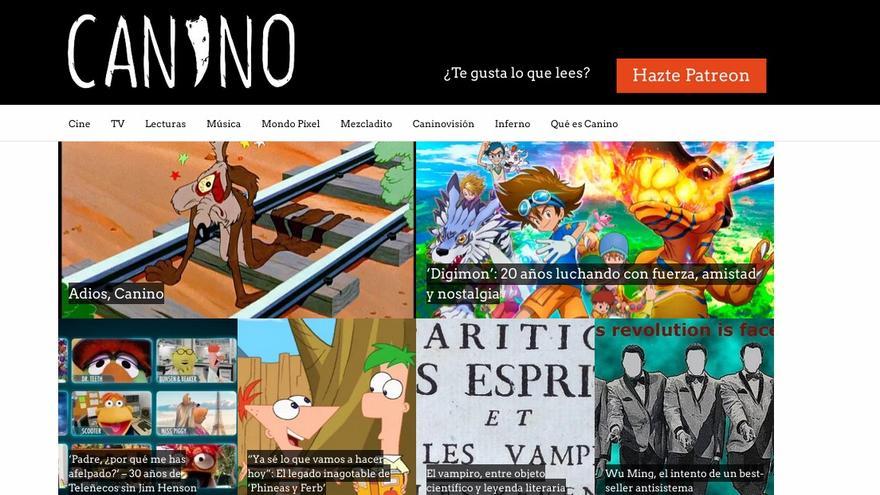 After five years of publications, texts, criticisms and cultural analysis CANINO announces its closure. This was communicated by the cultural journalist John Tones in a statement on the media's website.

"CANINO does not close for economic reasons: the project has been deficient but bearable from the first moment, and in terms of audiences, we are literally better than ever," says the cultural journalist in the statement. "As has happened to so many other media, the confinement of a few months ago has done us well in numerical terms, and our figures were still remarkable for such a modest medium, literally one person taking care of almost all the work with the occasional help of a few. how many friends. But simply, the time has come to say goodbye. "

CANINO, a medium associated with elDiario.es, began its journey on August 3, 2015. In it 149 collaborators have written, more than 3,300 articles, many of them extensive and detailed analyzes of music, cinema, video games, literature, comics and a long etcetera. In addition to having offered content in other formats: podcasts, videos, two music festivals and for several years, talks at La Casa Encendida in Madrid.

"We came, with all the ingenuity in the world, to propose alternative approaches and themes in the cultural press, and of course we should not be the ones to say if we succeed," the statement describes. "CANINO was born as a suicide project and we saw little chance of survival, but thanks to the tireless support of our subscribers on Patreon and the generosity of our collaborators [...] we have endured much longer than expected. "

While officially announcing its closure, the website also announces that the texts will continue to be available for consultation and reading. And in addition, it reveals that the medium is working on a project in line with the five years of work carried out.

"A little thing has come up, actually, a little project related to CANINO. Anyway. Stay tuned to the usual channels, because the hell. We can't continue, but we can't stop being minor threats," they say goodbye.

Here you can read the full statement.