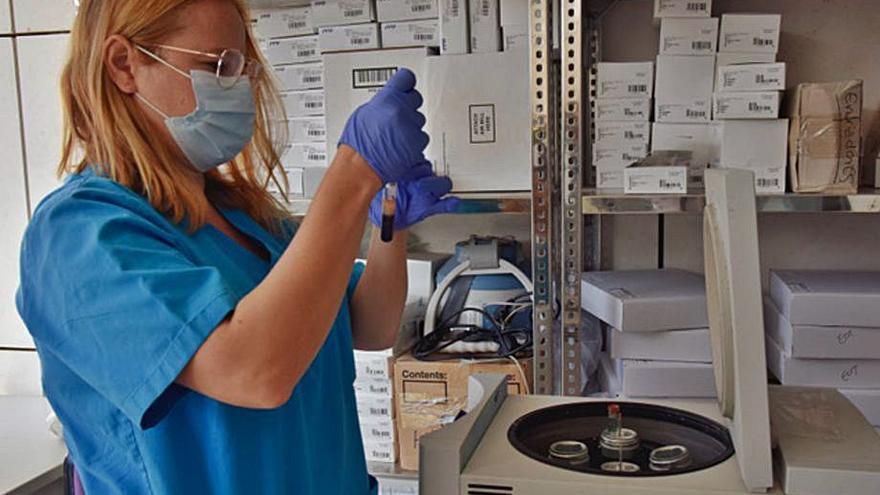 It should be noted that most of the research carried out in the island is aimed precisely at advancing the management of lung neoplasms, although it is true that there is also a large amount aimed at improving the approach to melanoma, cancer of breast and bladder tumors. According to the specialist, right now, in the capital center there are 70 trials underway, which translates into an increase of 20% compared to last year. In addition, since the end of 2020, the Insular installed two new laminar flow hoods in the Pharmacy Service – cabins that are used to prepare cancer treatments, preventing their components from escaping to the outside. It should be remembered that the lack of infrastructure led to the paralysis of the new experimental projects at the beginning of that same year. “Despite the arrival of the Covid-19 pandemic, the hospital and, especially, the manager of the complex, Dr. Alejandra Torres, made a great effort to install these bells,” says the oncologist, who also highlights the role played by the center’s pharmacists, the Pathological Anatomy Service, the coordinators of clinical trials and oncologists.

The truth is that Dr. Rodríguez Abreu founded the Canary Lung Cancer Group in 2018, with the purpose of optimizing care for this group of patients. However, the investigations now have a history of more than two decades in the reference hospital in the southern area of ​​Gran Canaria and were promoted by Dr. Adolfo Murias and his team. “Thanks to the involvement of professionals and the participation of patients, we have made great progress. It is important to highlight that the Hospital Insular has been a pioneer in the world in the development of many immunotherapy drugs and targeted therapies to treat lung cancer, ”the expert emphasizes.

It must be taken into account that in order to carry out these studies, it is necessary to comply with the rules of good clinical practice. For this, a multidisciplinary group, made up of 31 people, is in charge of reviewing the protocols. “We have to guarantee the safety of the patients. For this reason, we carry out an ethical and methodological evaluation of each of the clinical trials that are presented to us, ”explains Dr. María Dolores Fiuza Pérez, technical secretary of the Research Ethics Committee of hospitals and Primary Care centers in the province of Las Palmas , an independent body that has the accreditation of the Spanish Medicines Agency and the autonomous community itself.

Based on the words of the doctor, the meetings are held once a month, and in them the studies are carefully analyzed to be able to decide whether or not they meet the required requirements. “It is essential that they are well designed and that they guarantee, among other aspects, compliance with all security and confidentiality standards,” he points out.

To all this we must add that the center presenting the project must be prepared to be able to treat patients if they experience any type of side effect. “Normally, they all get approved because the usual thing is that there is a powerful scientific-technical rigor”, says Fiuza Pérez.

A window of hope

Francisco Lecuona is a 54-year-old patient suffering from melanoma and one of the many people who has had the opportunity to benefit from the advantages offered by clinical trials in the Canary Islands. As he relates, he learned that he suffered from this type of skin cancer in 1996 and, after receiving treatment, the neoplasm remitted. However, in 2018 it again manifested itself in a more aggressive way. «The diagnosis was not at all favorable and at the Insular Hospital they were very transparent. There were not many options, so I decided to participate in a clinical trial with Dr. Delvys Rodríguez and it seemed like a good opportunity, “says the patient.

In his opinion, the experience was “very positive”, as not only did his clinical picture improve, but he also received very professional and humane treatment from the teams involved. «The rehearsal lasted just over a year and I felt accompanied at all times. In addition, I was very fortunate to have Dr. Rodríguez, a doctor who has been very important in my recovery “, he values.

However, despite the progress made, the condition persisted, so he was encouraged to enter another experimental study. “This lasted less time and I also noticed its effects,” says Lecuona, who currently continues to deal with the disease and receives immunotherapy sessions every 21 days. “I am convinced that the rehearsals did a very important job. I am aware that I have progressed a lot and, as of today, the disease is under control, “he says.

For this reason, he believes that it is essential to trust Science and contribute to research work. “Only in this way can you innovate. If the affected people do not volunteer to participate in the trials, it would be impossible to obtain less aggressive and more effective treatments, “he says.