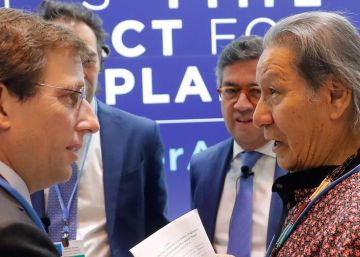 "Children and young people of the future have to breathe. The Amazon is more important than a church. I tell you from the heart, it is a constructive criticism." Mario Agreda, representative of the Indian Movement of America, has shaved with these words the mayor of Madrid, José Luis Martínez-Almeida, his statements last September on a Telemadrid program. In space, a girl asked what she would donate money to the cathedral of Notre Dame, affected by a serious fire, or to replant the jungle, and Almeida chose Notre Dame. "Yes, it is the lung of the world, but Notre Dame Cathedral is the symbol of Europe and we are in Europe," he said.

Agreda has approached the mayor, with whom he has maintained in a brief conversation before he participated in a round table entitled The road to a sustainable and resilient city to climate change during the second day of the 25 Conference of the Parties to the United Nations Framework Convention on Climate Change or COP25. The indigenous leader has also given him a brief in defense of the Amazon.

In a video of the conversation, published by eldiario, the Indian representative also refers to the intervention of the acting Government President, Pedro Sánchez, who on Monday inaugurated the Climate Summit: "Talk about the Earth and the environment, but say nothing about Murcia, where the fish are they are dying, millions of fish. " "I ask you please," adds the indigenous leader, whom they interrupt when he was going to list the problems that the Amazon suffers. "We know them perfectly," replies the mayor.

Already at the round table, reports Europa Press, Almeida has ensured that their discrepancies with the draft Central Madrid "They do not mean being a denialist" of the problem of air pollution and has given as an example of their commitment the Madrid 360 project, which has defended as better than the previous one because it serves "the 21 districts of the city".

The important thing is not only that vehicles cannot enter the center, but that they are reduced the vehicles in all 21 districts because I will act on 100% of the city, not only about 1.5% of the center ", has answered a question from an activist from Fridays for Future.

The mayor, in whose electoral propaganda he promised that "with Almeida Madrid Central ends on May 26 [date of the last municipal elections] ", was presented Monday as the biggest guarantor of the low emission zone of the capital. "The only Government that has fully applied Central Madrid so far has been the Government of the Popular Party and Citizens. With the previous Government there was a disguised moratorium on the fines and this Government is applying them. Tell me a single measure that has Madrid Central modified so far. Not one. It hasn't been modified, "Almeida said.

Last night at the SER, its predecessor, Manuela CarmenaHe replied: "Almeida said that the day after winning the elections he was going to remove Central Madrid. The citizens cannot be lied to." The deputy of More Country Inés Sabanés, promoter of Central Madrid along with Carmena, has interpreted this morning the words of the mayor as a "rectification" to his "policy of obstacles" to the area of ​​low emissions refers.

Upon arriving at the mayor's office, Almeida approved a moratorium on fines that he made that the contamination would fire again for a few days. But several judges they annulled that controversial measure, answered in the street with demonstrations and protests, and reinstated the sanctions. In September, the Madrid Consistory announced that it would limit the restrictions in the center, allowing vehicles with a C label to cross the area with a new plan called Madrid 360. However, that announcement has not translated into any modification of the ordinance, so Madrid Central is still in force as it was created. the previous municipal team.