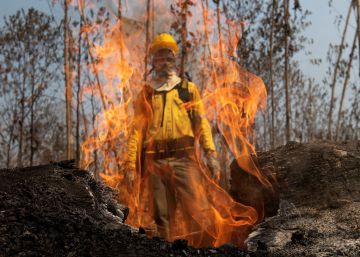 In 30 years, the burned surface of the Amazon rainforest will have doubled. A study based on the evolution of fires so far this century shows that the result of the interaction of deforestation and climate change will be a greater number of even more devastating fires. As a consequence, much of the amazon region it will become a net emitter of greenhouse gases that, in turn, would feed back the process. There are experts who start talking about a point of no return and the sabanization of the Amazon.

Brazilian and American researchers have modeled the evolution of fires in almost 200 million hectares of the southern and southeastern portions of the legal Amazon. In the model they integrated the number of fires and their main characteristics (moment of ignition, duration, burned area …) with the evolution of deforestation and climate change between 2000 and 2050. Both processes are independent but, combined, they affect the amount and severity of fires, as this work shows, published in Science Advances.

In the worst case scenario of expected emissions and maintaining the current deforestation rate, relatively low (compared to 2000), the severity of fires will intensify. In an expected context of higher temperature and lower humidity, the dry season will lengthen, exacerbating the conditions for ignition. In 2050, according to this study and in this scenario, up to 15 million hectares of forest will have been burned.

But it is in combination with deforestation that climate change will sweeten the fire until threatening what the Amazon has been in the last 55 million years. In a context of high greenhouse gas (GHG) emissions and greater regional warming, tree logging intensification will expose the rest of the jungle. The study estimates that, in this scenario, the hectares burned in 2050 will rise to 22 million.

Among the synergies between climate change and logging that explain this increase in the burned area is a general increase in the flammability of the forest. The edges and edges of the forest, more exposed, will have increased. In cleared forests, the greatest solar radiation reduces humidity, the main natural firefighter. And a less humid environment facilitates the start and spread of a fire and complicates its extinction. In addition, what remains of the jungle will have it more complicated to recover.

“Our projections point to an acceleration of fire activity in the southern Amazon,” the study authors conclude and add: “We show that up to 16% of the forests in the region could burn as the weather it gets drier and warmer in a few decades. “

A paradoxical effect of these projections has to do with GHG emissions. The Amazon rainforest is the main sink of COtwo that is on the earth’s surface. Fires could upset your balance. According to this research, and in the worst climate and deforestation scenario, the burning of the sixth part of the Amazon will free more than 17,000 million tons of CO by 2050two into the atmosphere, turning a good part of the south and southeast Amazon into net GHG emitters.

“Under normal conditions, tropical forests such as the Amazon are very humid, with a short dry season and very resistant to fire,” recalls the researcher at the Institute for Advanced Studies at the University of São Paulo (Brazil) Carlos Nobre. “However, climate change has generalized higher temperatures and more extreme droughts everywhere, also in the Amazon. Alongside the degradation of the tropical forest caused by man and the intensive use of fire in tropical agriculture and to clarify new ranches and farmland, all this makes today’s Amazon rainforest exponentially more vulnerable to fires than in the past, “adds Nobre, not related to this study.

The fire thus joins the cocktail that threatens to change forever what the Amazon is. “We are very close to reaching a point of no return in the sabanization of large portions of the Amazon rainforest“, says Nobre, who wrote an editorial about this risk in the magazine Science Advances last month. “If we overcome this point of no return, more than 60% of Amazonian forests would become a tropical dry savanna. What would remain of the jungle would be imitated to the western portion of the Amazon basin, at the foot of the Andes. south, east and northeast of the Amazon rainforest could disappear, “he warns.

Ghosts, skeletons and cats: Google disguises itself for Halloween