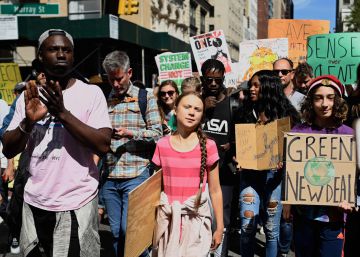 This week, the headquarters of the United Nations has been a cry about the need for fight pollutant emissions, from the secretary general, through the leaders of most countries to Greta Thumberg.

Climate change is already among the priorities of the world political agenda, great news. But in the middle of the deafening noise it is necessary to analyze the facts and numbers. The Nobel Prize in Economics Simon Kuznets taught us that lower income countries pollute more and, as development and per capita income progress, countries reduce their pollution.

In the last decade, the Kuznets curve is being met. Developed countries have reduced their carbon dioxide emissions by 7% and emerging countries have increased them by 27%.
India stands out, where emissions have increased 70%. China, with an increase of 27%, explains two thirds of the emissions of the last 10 years. However, if Kuznets lifts its head it would praise the efforts that China is making to fight climate change while removing hundreds of millions of its citizens from extreme poverty. If China had followed the evolution of European development, at this time we would be consuming three times the resources of the small planet Earth, as Peace Nobel Mohan Munashinge explains.
Trump is a climate change denier, but power regulation is in the hands of the states and dioxide emissions have been reduced by 10% in his country.

In Europe, emissions have fallen by 16%, to 1968 levels. An additional effort can be requested but denying the effort is a fake news The technological revolution and the relative prices of renewable energies anticipate that the reduction of emissions in developed countries will be more intense in the future. In a few years, batteries and electric cars They will have a significant reduction in their prices and transportation will join the production of electricity in the effort.

Governments should move from words to action. They should set an example by installing photovoltaic panels on the roofs of public buildings; they should increase the offer of vocational training to put installers on the market and avoid bottlenecks and give tax incentives to non-polluting activities so that citizens accelerate their investments. As the Sustainable Development Goal 17, they should establish alliances with universities and the private sector so that the best engineers and researchers do not cease in technological progress at prices that make competitive non-polluting products, as the Chinese have achieved with photovoltaic panels.

If they did all this by dedicating only 10% of the effort they now devote to raising awareness about climate change, they would be 100 times more effective in reducing emissions. And the Greta girl could go back to school to be shown the Kuznets curve and the actual emission reduction data in Europe and the US.