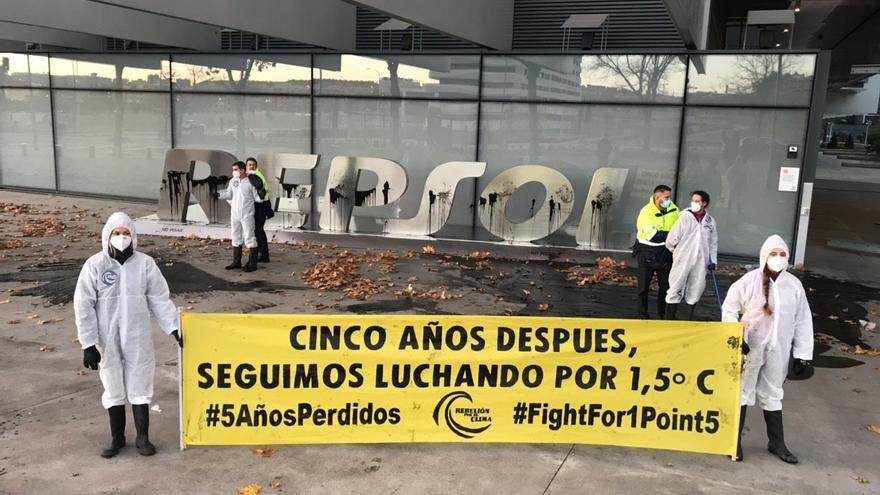 Environmental activists have spilled black paint this morning at the corporate headquarters and offices of energy companies, banks or the food sector, among others, as part of a protest action against the green washing of image (also called greenwashing) attributed to these companies.

The operation has been coordinated by the 2020 Rebelión por el Clima (RxC) collective, a kind of umbrella for non-violent civil disobedience that houses younger environmental groups, such as Fridays for Future or Extinction Rebellion, and also veteran associations in action. direct such as Greenpeace or Ecologists in Action.

On the fifth anniversary of the Paris Agreement, climate activists have carried out a total of 50 actions in 27 provinces of the State, and have spread the hashtag # CincoAñosPerdidos on social media.

In Madrid, different groups of RxC have appeared at the headquarters of Repsol, Endesa, Iberdrola, Naturgy, Iberia, Real Madrid, BBVA, Banco Santander, Coren, McDonalds and Burger King, as well as at the Congress of Deputies. Dressed in white overalls, with brushes and mops, they pretended to clean up an oil spill.

The banners they held read ‘Five years later, we are still fighting for 1.5 ºC’, in addition to the slogan of the international campaign ‘Fight for 1point5’ (in Spanish, “fight for a degree and a half”) in reference to the agreed goal by the parties to the United Nations Framework Convention on Climate Change at COP21 in Paris, to contain global warming so that in 2100 the increase compared to pre-industrial levels does not exceed that temperature.

Among other actions, environmentalists have dyed the Repsol letters displayed by the oil company in black at its headquarters in Méndez Álvaro in Madrid, and they have scattered fake oil on the ground – a liquid mixture of squid ink, crushed tomato and hot chocolate. the cup (all organic, they have insisted) – which they brought in drums, staging an oil spill.

The company announced at COP25 (Chile’s climate summit held in Madrid last December) its intention to have zero net emissions by 2050, a commitment that analysts consulted by Ballena Blanca have described as “Confusing and very difficult”.

“Repsol is among the most polluting companies and is embarking on the road to greenwashing without abandoning its main source of income, fossil fuels,” said one of the RxC activists who participated in the action, who clarified that her protest did not he criticizes the energy transition that the oil company can carry out, “because it is good that they bet on renewable sources, but they have to pay and take charge of what they have generated.” “What is not admissible is that they say they are participants or even champions of the environmental struggle when they are responsible for the climate crisis,” he explained.

The brands that have been criticized for the ‘green wash’ of image also appear in the recent Greenpeace campaign “Cheating the weather”. They scold these companies for showing a commitment to the Paris Agreement and the United Nations Sustainable Development Goals while, for example, “only seven of them have an action plan and identify measures to adapt to climate change”, such and as revealed this year by an analysis of the Observatory of Corporate Social Responsibility.

In the words of RxC activists, these commitments are not solutions to the climate emergency but “mere advertising curtains that hide their inability to achieve a sustainable model.”

Although they have focused mainly on these most polluting industries, and especially on fossil fuels, the protests have also targeted public institutions, with a similar staging (cleaning staff attire and fake oil) in front of the Congress of the Deputies.

Against governments, environmentalists claim that they “have yielded to their pressure [del gas y del petróleo] over the years, putting the needs of this industry before the well-being of the citizens ”.

“Today, in a context of an unprecedented global pandemic, those same companies are trying to absorb the funds destined for economic recovery in the face of the crisis generated by COVID-19, without any kind of climate, environmental or social commitment,” they warn.