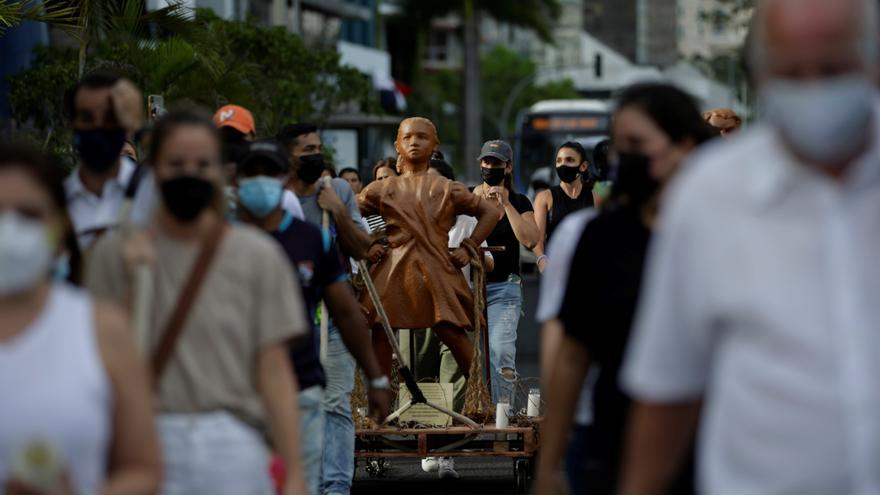 Panama City, Jun 2 (EFE) .- Artists placed two clay statues simulating defiant children on Wednesday in front of the seat of the Parliament of Panama in "honor of the victims" of sexual abuse of minors in shelters, a scandal that broke out last February after the dissemination of a parliamentary report.

"We are making an artistic vigil for children and adolescents, for all cases of abuse and violence. We are here to accompany them in their pain and be a light of hope," Jordana Fasano, one of the participants, told Efe.

The two statues, raised on a wooden platform with wheels, were dragged with extensive ropes by a group of protesters "in mourning" along one of the main arteries of Panama City until they reached the headquarters of the National Assembly. (AN, Parliament), where they will remain indefinitely.

The dolls, a boy and a girl with their hands on their hips in a position and a defiant look, "represent each of the cases of abuse in the country," explained Fasano, and on their feet two plates rest on " honor, recognition and accompaniment to the pain of the survivors of abuse ".

"We will leave them in the Assembly because it is the main source of power in the country and we need to make this call," he added.

Submerged in silence, at least a hundred protesters were present at the vigil, accompanying them with banners bearing some messages such as "Abusive state" or "React! Or is it ... do they have to rape you?"

"We want to make latent the great problem that we are experiencing and that the rights of our children are not being respected. We want to raise awareness in civil society," Fasano added.

The shelter scandal broke out last February, when a parliamentary subcommittee presented a report detailing that since 2015 dozens of minors have been sexually abused and physically and psychologically mistreated in at least 14 of these shelters that are under state supervision.

According to the official figures available, the shelters, around fifty that house some 1,200 minors in vulnerable situations, are supervised by the state National Secretariat for Children, Adolescents and the Family (Senniaf), and also receive public subsidies.

The Prosecutor's Office reported on April 26 that "it has relocated minors and issued protection measures in favor of 46 children within the investigations" that have been carried out "since 2017, some 26, related to the commission of crimes" in the shelters for minors.

In the midst of the scandal, Eduardo Ulloa resigned as attorney general, a position assumed by his deputy, Javier Caraballo, who according to observers has given speed to the investigations.

Mayra Silvera also resigned as director of Senniaf, a position she had assumed this year and which has already been filled by lawyer Graciela Mauad.