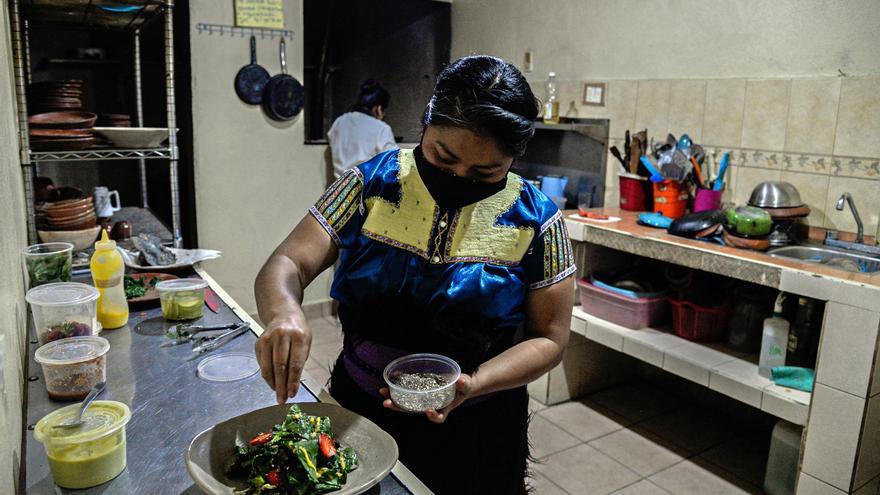 San Cristóbal de las Casas (Mexico), May 8 (EFE) .- While preparing an empanadas with a chayote tip (stem) and a black corn tortilla, Claudia Albertina Ruíz Sántiz vindicates Mexican indigenous cuisine after appearing on the prestigious list “50 Next “of gastronomy.

“The richness of traditional indigenous cuisine lies in its history,” the 33-year-old cook, originally from San Juan Chamula, in the southeastern state of Chiapas, told Efe this Saturday.

At the end of April, eight young Latin Americans made their way into the first edition of the “50 Next” list, which distinguishes talents under 35 years of age who contribute to the future of world gastronomy as producers, educators, creators of technology or activists.

The list, created by the promoters of “The World’s 50 Best Restaurants”, in collaboration with the Basque Culinary Center, recognizes the work of 50 young people, from 34 countries, who are working to promote positive change in gastronomy.

Among these pioneers of the hospitality industry was Claudia Albertina Ruíz Sántiz, an indigenous Tzotzil cook who defies tradition.

From her small rustic kitchen, the young woman related what the vision of the Tzotzil peoples is and how it is linked to the land, the being and its gastronomy, always honoring the land.

“In indigenous thought, everything that revolves around us has life. The land, the producers and from there, from the cosmovision and from the being, are united with gastronomy. This is where indigenous gastronomy begins ”, said the chef.

Along with this vision of what cooking means, Claudia Albertina indicated that she does not seek so much to challenge tradition, but to innovate it.

“It is just transforming the presentation, and maintaining the flavors of the vegetables and meats in the Chamula style,” he stressed.

The young promise of gastronomy studied at the Chiapas University of Sciences and Arts, which helped her perfect family recipes, from the simplest such as tortillas to traditional preparations such as sour atole (a drink made from fermented black corn).

Once he finished, he published in 2012 a thesis that was a cookbook in Tzotzil and Spanish on the gastronomy of the region.

This allowed her to become known within the field, working with a couple of renowned chefs in the country.

The cook remembers stories that her ancestors transmitted to her so that she would be aware of the magical secrets of cooking and good seasoning.

One of them, he explained, is that the smoke released from the embers of the oak wood permeates the odors and textures of the food from the orchard, giving a unique flavor.

Exhausted but happy, she said that reaching this recognition has not been easy, since she had to break with the stigma of racism, still present because she is of indigenous origin.

Even today, the large hotel companies close their doors, he lamented.

She said she was grateful for the experience acquired with Enrique Olvera and in the kitchen of the Máximo Bistrot de Lalo García in Mexico City, as it strengthened her knowledge and character to direct her own project.

In 2016, the woman returned to Chiapas to put her knowledge into practice and opened Kokono, which means epazote (an aromatic plant) in the Tzotzil language, where, in addition to being the owner, she is the executive chef.

Its menu highlights the Chiapas customs and its ingredients. Mixing modern techniques with traditional recipes is his strong suit.

On the verge of tears, Claudia said: “When I found out that I am the only Mexican I began to see the magnitude of the matter, they were talking about Chiapas, San Juan Chamula.”

And he went on to explain that San Juan Chamula “is recognized touristically as a mystical place, but in the state it is recognized as the town that always raises up in arms, but its gastronomy has never been talked about and it is a very great emotion.”

In addition to running her restaurants, Claudia, driven by the “slow food” philosophy, takes this gastronomic movement to the poorest places in her place of residence, where she teaches how to prepare food, making the most of raw materials, managing to obtain good food. and at a fair price.