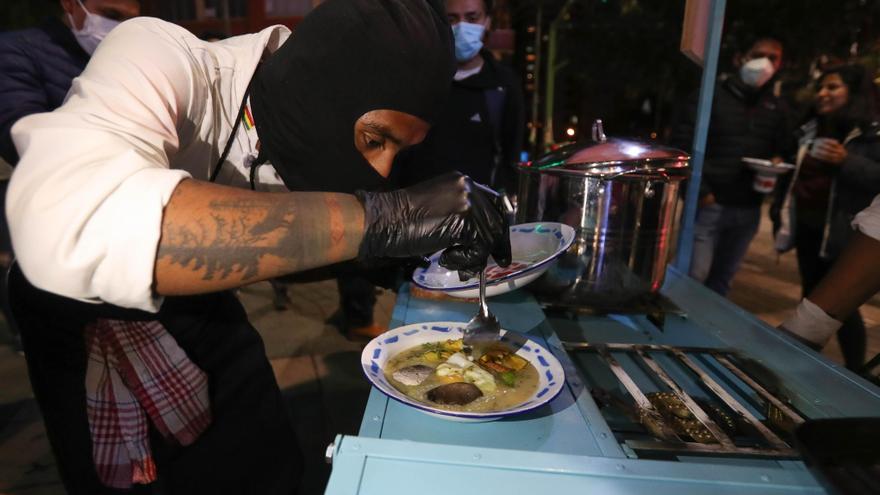 La Paz, Dec 25 (EFE) .- A small blue mobile car is the work instrument of Bolivian chefs who, dressed in an impeccable black apron and a balaclava that covers their faces, prepare creative dishes in the streets of La Paz based in nutritious and local ingredients that are long forgotten.

These are the “Clandestine Carts”, a street food proposal that offers to enjoy gastronomy with a touch of creativity from the chefs and, at the same time, with nutritional values ​​due to the use of the ingredients.

The initiative was born after the gastronomic collective Sabor Clandestino held workshops with the parents of students from a school in El Alto, a neighboring city of La Paz, to exchange ideas on new ways of cooking local products.

“That is where the idea was born of being able to try to get nutritious food, economically accessible, based on local products, ours, and above all rich and that is on the streets,” the coordinator of Sabor Clandestino, chef Marco Antonio Quelca, told EFE .

The five “clandestine carts” that are part of this initiative move through La Paz and El Alto in search of a corner or space available on the streets to offer a different gastronomic experience to passersby.

The small blue mobile car draws attention because it carries banners with local expressions such as “uta, que waso”, which in this case is used to express that something is too good, or “next time with yapa”, in reference to that little extra sometimes given away by street food vendors to their buyers.

The cooks prepare the pots, the fire, the plates and colored glazed iron glasses and adjust their aprons, while the people approach curious to know what it is.

Finally they put on the black ski mask and begin to explain the menu to the “landlords”, that is, to the diners.

The idea of ​​covering one’s face is part of the concept of the project with the aim that its preparations “be the image for the diner” and that the cooks remain in the background while the “homemakers” enjoy the street experience, he explained to Efe. Chef Willians Cori.

Quelca added that the use of the ski mask also has a sense of “irreverence”, of “secrecy” and, in turn, shows the “discrimination” suffered by some of the most “humble” trades in the country that they must hide his face to work, like shoe shine.

A NUTRITIONAL AND CREATIVE MENU

All the dishes have in common the nutritional value and creativity in their presentation to make healthy street food a tasty experience.

Sabor Clandestino created together with nutritionists a recipe book with different proposals for breakfasts, mid-morning meals, lunches and dinners, the offer that the carts present to passers-by at different times of the day.

The cooks of the five carts were trained for three months on healthy eating and the use of ingredients, Quelca said.

The concept of these street carts is to use local products such as the diversity of native potatoes, different cereals and ancient Andean foods such as cañahua, quinoa, amaranth and tarwi, with new preparations to make them attractive to “homemakers.”

This proposal leaves aside the role of meat or fried foods, common in the other street food carts that abound in the city, said Quelca.

Thus, Cori installed her cart one night in El Prado, the main avenue of La Paz, to offer some chorizos made with cañahua pito, which is the flour of that Andean cereal, and others of chard accompanied by some crispy chuño or dehydrated potato.

They also offer pasta made from chuño with a sauce of cheese, beans and huacataya, an aromatic native herb, as well as yucca, cheese and banana dough shoulders and quinoa croquettes, among others.

At first, diners react astonished and some are a bit reluctant to try, but after the first bite they ask about its preparation and ask for more.

“Generally, nutritious food is boring or tasteless, but these cooks make it entertaining, beautiful to look at and delicious,” Angela, one of the guests, told Efe.

The idea is for the project to expand and for there to be more carts around the city, but for now the objective of Quelca is to continue with workshops with parents so that children can be offered food with high nutritional values ​​from the house.

There is even the possibility that the carts could enter the schools during the break to offer small and cheap snacks to the students.