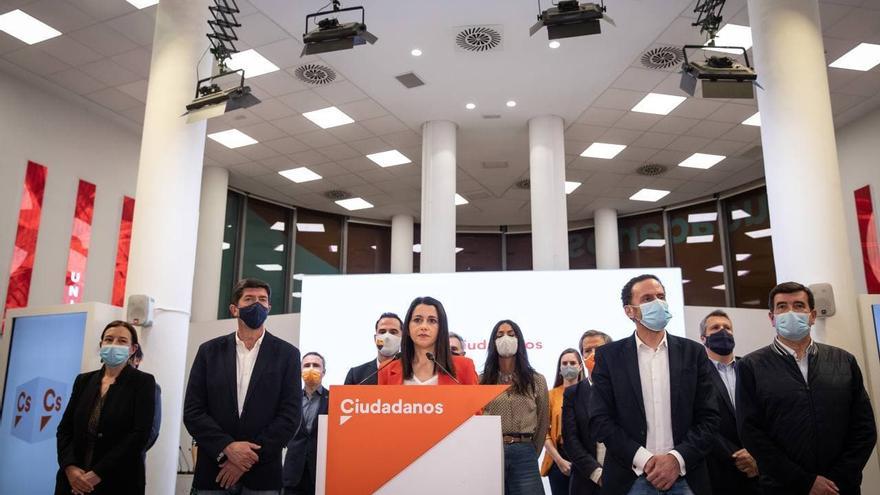 Ciudadanos does not lose heart despite all its difficulties. Inés Arrimadas has warned that she neither “throws in the towel” nor is she willing to “give up”. “We never give up. You can’t beat someone who never gives up,” he said in his closing speech of the political convention he just held his party to relaunch the project. The notice was not only addressed to Pablo Casado’s PP before his eagerness to ‘engulf’ them, it was a message to all those who consider the party “for dead”, clarify sources of the management, delighted with the balance harvested in that conclave. The meeting achieved one of its main purposes: to place the training in the media spotlight just when it is going through its worst moments, and to promote the image of Inés Arrimadas, highly questioned by a sector of the party after successive electoral defeats and strategy errors committed, as was clear after the failure of the motion of censure in Murcia.

The party leader needed a mass bath among her own and was the true and almost the only protagonist of the two days of “debate” of the convention –highly questioned by Cs Renovadores the critical platform that assures that the much vaunted participation of the affiliates was “feigned”. A few days that started precisely with another clear message to Casado: “There will be no merger with the PP.” Although the person in charge of launching the announcement was the party’s vice secretary and spokesman, Edmundo Bal, who has become the leader’s right-hand man, Arrimadas also declared: “We are going to maintain this liberal project with independence and autonomy.”

After that meeting, the leaders of Ciudadanos, in addition, believe they have achieved another of their objectives: that it is visualized that theirs is above all a party of a “liberal”, “progressive”, “center” and “Europeanist” cut, differentiated that of the “conservatives” and that of the “social democrats”, the other two ‘families’ whom Arrimadas called to bury their fights and to “collaborate” to forge “consensus” and promote the reforms that in his opinion Spain and Europe need .

To reinforce that “liberal” character of Ciudadanos, on which they insisted staunchly, the party leadership invited Dacian Cioloș, the president of Renew Europe, the liberal group where they are integrated in Brussels, to participate in one of the presentations: “It has said the president of our European group. Liberalism in Spain is called Ciudadanos, it is not called PP. The PP is the conservative party, which is in Europe in the conservative group. ” “You are not what you say you are but what they recognize you are from the outside,” remarked the leader.

The party leaders, however, deny that defining themselves now as “liberals” and “progressives” is a “novelty” or a return to the origins of that Ciudadanos who was born in 2006 as a formation that “drank from the sources of social democracy. “. “We maintain our usual ideology,” say the sources consulted, denying, on the other hand, that they are going to change the name of the party, something with which it has been speculated before the degradation suffered by the brand. The purpose of that conclave, they point out, was neither to change its acronyms nor to renew a project that it believes is “absolutely current”, but to “reaffirm itself” in what they are and face the future “with enthusiasm.”

Despite the fact that the most heard in the two days of the convention was that definition of “liberal” and “progressive”, the decision to continue maintaining its agreements with the PP through thick and thin without caring about the rudeness it has been doing to them for months the party of Casado -the last one, in the Granada City Council that have been described as “botched”– It continues to place them in the photo of “the three rights”, a typecasting that they reject. But the party leader herself seems willing to bury her troubles with Casado and at the closing of the conclave she asked him to “stop” the attacks that she launched on her party to form an alternative to sanchismo, although each one on their site, with their lists and with their initials.

The change in ideology promoted by Rivera

At the IV General Assembly, held in 2017, the former president of the party, Albert Rivera, eliminated references to social democracy from his political ideology and presented himself as a “pro-European”, “liberal” and “progressive” party, as well as “non-denominational. “, instead of” secular “. However, Rivera’s animosity towards Pedro Sánchez –with whom he tried to close an impossible investiture in February 2016– and his decision after the general elections of 2019 to agree practically only with the PP and veto the PSOE also put his “progressivism” in question. Ciudadanos became “the crutch” of the conservative party, with whom he closed several coalition governments subordinate to Vox. Colón’s photo from February 2019 de Rivera along with Casado and the leader of Vox, Santiago Abascal – who continues to persecute Ciudadanos since then – certified which side the party leader was on. Rivera ended his days in politics after the elections of November 10 of that same year, leaving Ciudadanos sunk, with only 10 deputies and far from the 57 achieved in April, just a few months earlier.

With this burden, Arrimadas began her tenure as president of the formation a year and a half ago. The new leader tried to get rid of that image by sitting down with the Sánchez government to agree on both health and economic measures after the outbreak of the pandemic and the General State Budgets (PGE), which she considered “emergency.” That attempt at an agreement failed after Sánchez “preferred to hold the hand of Otegi and Junqueras”, as he regretted at that time and constantly remembers Arrimadas. Since then, everything has gotten worse for Ciudadanos.

In Catalonia, where in 2017 they achieved a historic milestone by becoming the first political force with 36 deputies, they have been left with only six. And the failed motion of censure in the Region of Murcia that they tried with the PSOE triggered an unexpected electoral advance in Madrid. The cost of this erroneous strategy has been very high for Arrimadas. Not only did he lose power in Murcia, also promoting that Vox entered the new PP Government, but the party was shortly after without representation in the Assembly of Madrid, while the leaks to the PP are constant. His relations with the Government are broken and the good harmony with the PP falters despite the fact that Arrimadas went to a meal with Casado to probe his intentions and see if they smoothed out any rough edges, given that both parties still maintain the coalition governments in Andalusia and Castile and Leon.

Now, after this convention, the leaders insist that there is a “before and after” for training. Her colleagues in the management affirm that they are “very proud” of the speech that the leader gave as the final touch to the event in which during the long hour that lasted Not once did he mention Rivera. “It is the best speech that has been heard in many years, a speech by a clearly liberal leader who has been praised by the whole world,” they say.

They also believe that it marked very well their differences and the things that separate them from the right and the extreme right: “Those who want there to be same-sex marriage but also low taxes; a pro-European party but who do not want the judges and the teles; those who want ecology but also help the self-employed or those who want to be able to end their lives with dignity, with a guaranteeing regulation of euthanasia, but do not want concessions to nationalism, here they have a modern, reformist party that always defends freedom “, he assured in his closing speech, to conclude that only if Ciudadanos manages to stay on the political board will there be a possibility that” consensus “will be closed and” State pacts “are promoted. For now, however, he has hinted that his nine deputies are not going to negotiate the new accounts for 2022 with this Government. According to Arrimadas last Friday, the Prime Minister made it clear when she tried to agree on the previous budgets that she had “chosen partners for the entire legislature.” “I extended my hand to him but unfortunately Sánchez chose that other agreement, he took the hand of Otegi and the independentistas. I feel with a clear conscience,” he said.

In Ciudadanos they insist that they are now more necessary than ever. “We are an essential party,” said Arrimadas, appealing to PSOE voters “who are not represented by what Sánchez is doing,” and to those who feel conservative but who do not see their model in the PP, to return to being a “hinge” party capable of closing deals to the “right and left”. With that eagerness they hope to survive in the next electoral appointments to avoid pacts with “the extremes”, where it places Podemos – a party that Ciudadanos denoses – and “the independentistas”, on the one hand, and Vox, on the other. A strategy that Arrimadas already used in the campaign of the recent Madrid elections and it did not work for him.

So from now on Ciudadanos will try to take flight, letting all the limelight fall on the figure of the leader, in whom they have placed all their hopes of survival. In fact, Arrimadas does not stop giving interviews and is doing a radio and television tour these days to win back the support of the ‘Sherpas’ –those media supports that Rivera regretted having lost– and of the entrepreneurs who helped the founder in his day and then let him down.