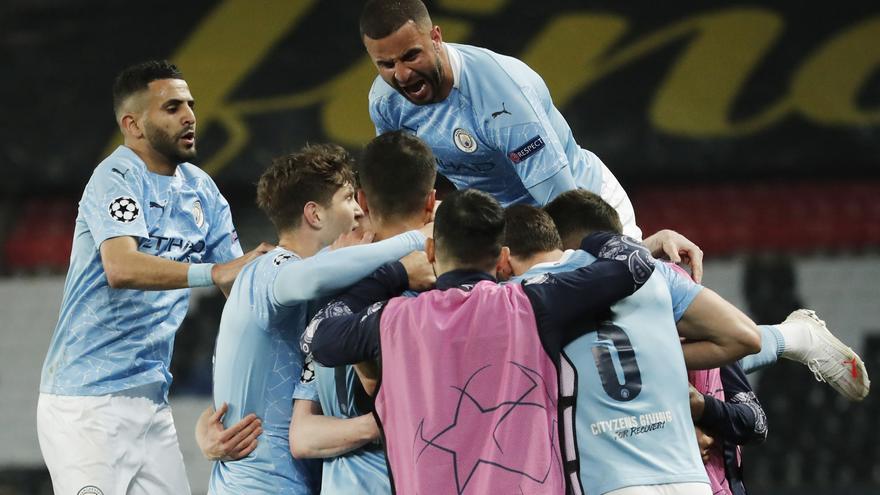 The Manchester City Pep Guardiola took a giant step to qualify for his first Champions League final by coming back in the Parc des Princes against him Paris Saint-Germain by Mauricio Pochettino (1-2) in the duel of the rich with the capital of the Persian Gulf.

The French team, in which Their stars Mbappé and Neymar did not shine especially, It was much higher in the first half and went to rest with an advantage thanks to the goal scored by the Brazilian Marquinhos.

The result was harsh on the French, who came with the tailwind of having eliminated Messi's Barcelona and defending champion Bayern Munich in the two previous phases.

City, who had suffered against Borussia Dortmund to reach the semifinals, took a valuable income, despite being at the mercy of the rival in the first half, driven by a great Di Maria.

PSG showed an enormous capacity to adapt to the circumstances, capable of defending themselves with order when the rival took the initiative and of placing them against the ropes at the slightest moment of weakness.

Thus he deactivated a City that did not know how to impose its rhythm, muddy in the center of the field, the place where Pochettino wanted to fight Guardiola.

Guaye and Paredes were solid and turned off the English creation zone, where neither Rodri nor Gundogan raised their heads, busy to recover, stuck in the trench that PSG dug.

The goal reached the quarter of an hour from set pieces, the first conceded by Guardiola's this season, in a great corner kick from Di María, who now has five assists in Europe, impeccably rematada by Marquinhos, after a defensive mismatch by City, which achieved its third target.

The disadvantage further settled the locals and disoriented the visitors, who even gave up the ball, their best shield, which generated a permanent sense of danger in Ederson's area that further disconcerted the team.

The PSG recovered and threw with speed, before a rear in disbandment and although the occasions were not very clear, the blood was smelled. In the other area, hardly any news from Navas, who nevertheless appeared at the key moment, in 43 when a defensive error left Foden alone in the midfield, ready to shoot the Costa Rican goalkeeper, who reacted well to the cowardly shot by the team. young English promise.

Guardiola played out of the blue, true to his style, making it clear that he was not satisfied with the result despite the risk of leaving space for Mbappé.

The young French promise was about to take advantage of it in 56, but Verratti failed to finish off his center.

The City began to create danger, to find Greeks in the French approach, to create restlessness in a desert Park of the Princes.

The Belgian found himself, almost unintentionally, with the draw, in 64 in a center to the area that did not find a finisher, but that misled the "Tico" goal.

It was the beginning of the misadventures of the Parisians who seven minutes later they received a second blow, a goal from Mahrez from a free kick, which slipped through the barrier of the premises, where Navas could not wait for it.

As if that were not enough, in '77 Guaye lost his nerve and cut off Gundogan's ankle to win a red one that left his team at an inferiority.

With one more, City went for the third goal that almost finished the tie, but it did not go crazy either and although it had on occasion the scoreboard did not move.

Referee: Felix Brych (ALE), admonished the local Paredes and Neymar and the visitors Cancelo and De Bruyne. He expelled the Parisian Gueye.

Incidents: First leg of the Champions League semifinals played in the Parc des Princes in Paris behind closed doors due to the coronavirus pandemic.