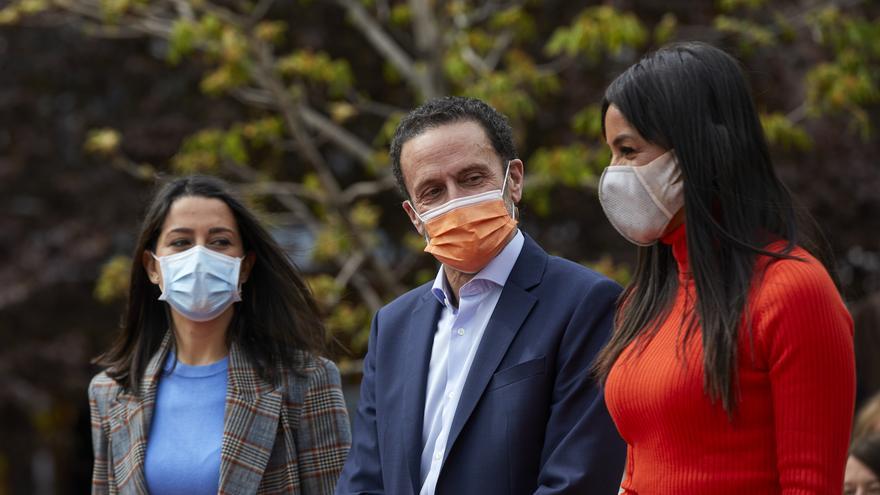 Ciudadanos does not raise its head. To the dire prospects he has for the next elections on May 4, with a risk of being left out of the Madrid Assembly, we must add the significant loss of institutional power that he has suffered in a few weeks. First in Murcia, as a consequence of the failed censure motion against the Government of Fernando López Miras, of which they were part. And later in Madrid, precisely because of the electoral advance decreed by regional president Isabel Díaz Ayuso, which led to the cessation of the vice president and all the advisers of the coalition government. To this must be added the almost daily trickle of losses from public office that the formation has been suffering in recent weeks in both the national – Congress and Senate – and regional Chambers, and the leaks towards the PP that have also occurred after the hostile bid launched by Pablo Casado’s party.

The box of thunder was unleashed by the signing of the party’s export spokesperson Lorena Roldán on the eve of the Catalan elections to run on the conservative party lists. Shortly after, in mid-January, Ciudadanos lost the mayoralty of the Madrid municipality of Villaviciosa de Odón after the motion of censure presented by the PP and Vox against the until then mayor José Luis Pérez Viú, who was replaced by the popular Martín Galán.

The worst, however, was yet to come. The biggest setback was suffered by Arrimadas when the news broke that Fran Hervías, the almighty ex-secretary of Organization from Albert Rivera’s stage, was leaving for the PP with a whole list of positions of Citizens that he has been trying to capture. Another of the most notorious and controversial leaks has been the march to the candidacy of Isabel Díaz Ayuso by the Valencian Toni Cantó.

In Congress, the Alicante deputy Marta Martín, who resigned from the act, has left her seat; and the Sevillian Pablo Cambronero, who has settled in the Mixed Group. In the Senate, after the Hervías march, the Navarrese Ruth Goñi and the Valencian Emilio Argüeso, who have joined the Mixed Group, have also left the party. AND in the Madrid Assembly the parade has not stopped. One of the most notable casualties has been that of the deputy Marta Marbán, who has ended in the candidacy of Isabel Díaz Ayuso.

A large part of these leaks were precipitated after Arrimadas’ decision to present a motion of censure together with the PSOE in the Murcia region, where Ciudadanos had held one of the coalition government with the PP since May 2019, a decision that triggered one of the biggest crises in the party after seeing the initiative frustrated because of three defectors. As they explained at the time, the reasons that led them to take that risky step were the “corruption” of the Popular Party, added to the scandal of irregular vaccinations -which took the former Minister of Health, Manuel Villegas-, and the negotiations between the PP and Vox to reintroduce the parental veto.

But far from making the operation in Murcia profitable, the result was a significant loss of power. In total, three ministries, four general secretariats and 12 general directorates that they had held up to that date. To make matters worse they saw how the leaders who betrayed them by voting against the motion, remained in the Government of López Miras despite calls from the regional coordinator of Citizens, Ana Martínez Vidal – who was the candidate to occupy the Presidency – to resign. Among them Isabel Franco, defector, vice president of the Government of Murcia and counselor for Women, Equality, LGTBI, Families and Social Policy. Francisco Álvarez, a defector, and now Minister of Employment, Research and Universities, and Valle Miguélez, another of the defectors, Minister of Business, Industry and Spokesperson. To the list we must add Antonio Sánchez Lorente, a fugitive, as a counselor for Transparency, Participation and Public Administration. In addition, two general directors also opted to unsubscribe from Ciudadanos and remain in the position of Francisco Álvarez’s Council. The same move was made by a secretary and a general director of the portfolio that Miguélez stayed.

The dismissals affected Ana Martínez Vidal herself, as director of the Company, Industry and Spokesperson; José Gabriel Sánchez Torregrosa, as counselor for Transparency, Participation and Public Administration; and to Miguel Motas, as counselor for Employment, Research and Universities – appointed by Citizens, but who was not part of the party.

The earthquake that caused the frustrated motion of censure in Murcia triggered the decision of Isabel Díaz Ayuso to dissolve the Madrid Assembly to call elections in the Community for next Tuesday, May 4. Ayuso broke with his government partners with whom he had maintained a coalition marked by clashes and public squabbles. The first decision of the Madrid president was to dismiss all the directors of Ciudadanos and their intermediate positions: Ignacio Aguado as vice president of his Government, spokesman and head of Sports and Transparency, and the other five councilors of his party with their corresponding vice-ministries, general directorates and general secretariats. Ciudadanos lost Ángel Garrido, in Transport, Mobility and Infrastructure; Marta Rivera de la Cruz, in Culture and Tourism; Manuel Giménez, in Economy, Employment and Competitiveness; Eduardo Sicilia, in Science, Universities and Innovation; and to Javier Luengo, in Social Policies, Families, Equality and Natality.

Ayuso immediately remodeled its equipment to distribute the competition of the portfolios that Ciudadanos had held, eliminating the Vice Presidency Council and appointing Enrique Ossorio as spokesman for the Government, who has also taken over the responsibilities of Science, Universities and Innovation, as well as the Ministry of Culture and Tourism. For her part, the Minister of the Presidency, Eugenia Carballedo, has assumed the powers of the Department of Sports and Transparency; the Minister of Finance and Public Function, Javier Fernández-Lasquetty, has been left with the Economy, Employment and Competitiveness, and the Minister of Health, Enrique Ruiz Escudero, is now also in charge of the Department of Social Policies. For his part, the Minister of Housing and Local Administration, David Pérez, has assumed the Department of Transport, Mobility and Infrastructure. The only ones to whom new powers have not been added have been the councilors of Justice, Interior and Victims, and that of the Environment, Spatial Planning and Sustainability, Enrique López and Paloma Martín, respectively.

This situation has been decided by Inés Arrimadas herself when decreeing the expulsion from the party of the president of Melilla, Eduardo de Castro, which was the only regional pact that Ciudadanos managed to lead after the May 26, 2019 elections. The party accuses him of hiding that he was accused in several court cases. The Melilla councilor is going to appeal the decision of his party, while he assures that he is preparing the presentation of complaints against the party leader and the candidate for the Community of Madrid, Edmundo Bal, for accusing him of “corrupt”.

Despite the earthquake in Murcia and Madrid that has led Ciudadanos to lose institutional power and numerous leaders, Arrimadas has tried to stop the aftershocks in other territories and the party is still part of the PP in a coalition of the governments of Andalusia and Castilla y León, as well as the Madrid City Council, an institution that manages more than 5,000 million of the public budget.

Investigative Commission in Congress on the Kitchen case