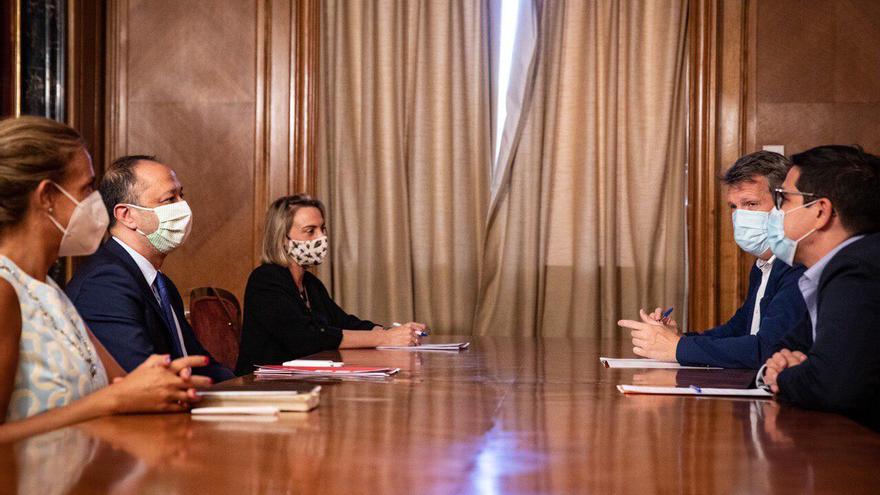 After an hour of meeting in the Congress of Deputies, Ciudadanos was satisfied with the meeting he had with the PSOE and the PP, having obtained the commitment of both major parties to convene “urgently” the Commission of Follow-up of the Anti-Transfuge Pact, as they demanded by letter last week after suffering in their ranks two important leaks of councilors, one in Santa Cruz de Tenerife and one in Malaga, which have changed the balance of forces that existed so far in the two municipalities.

In a statement released at the end of the meeting, Inés Arrimadas’s party points out that the three formations have addressed “the fight against undemocratic practices used to alter through the back door the majorities expressed by citizens at the polls”, and He congratulates himself for having achieved the commitment of the socialists and the people so that the Commission, which has been in session for more than 10 years, can now be called on an “urgent” basis. However, they have not set a date for such a meeting.

In the meeting, according to the version of Ciudadanos, “the three formations have agreed on the need for the political parties to be exemplary and forceful against what they consider a scourge for the institutions and for democracy, whose maximum victims end up being the citizens, who see the popular will broken in unacceptable marketing. ”

The meeting was attended by Citizens Carlos Cuadrado, First Deputy Secretary General, and his second, José María Espejo-Saavedra, secretary general of the parliamentary group. On the part of the PSOE, Alfonso Rodríguez Gómez de Celis, first vice-president of the Congress, and Susana Sumelzo, deputy for Zaragoza and head of Municipal Policy, finally attended. And on the part of the PP Raquel González, national secretary of Local Policy,

The reason for such urgency has been what happened in the municipalities of Santa Cruz de Tenerife and Malaga, where two councilors, who achieved their minutes under the acronym of Citizens, have decided to leave their membership and move to the group of ‘not attached’ , thereby promoting a change in the balance of forces of both consistories.

In the case of Malaga, the one who has slammed the door to Citizens has been the mayor Juan Cassá, who last May announced his departure as a Citizen to join the group of ‘not attached’, with what remains in his hands to maintain or overthrow the government pact that the PP closed precisely with the two councilors that he achieved in the municipal Citizens. This agreement allowed the popular Francisco de la Torre to continue as mayor of the city. The case is twofold because Cassá has also passed group of ‘not attached’ to the Diputación de Málaga, where the majority will also depend on him. To strengthen his loyalty, the PP has appointed him spokesman for the Government team and responsible for Relations with Institutions, which has turned into the best paid position in the province, since to the salary of this organism it can add subsistence allowances to attend the Plenary sessions and the municipal commissions. In total, Cassá, according to calculations of the opposition, will receive an income of 90,000 euros an ual.

The other focus of rebellion has been centered in Santa Cruz de Tenerife, where the until recently Councilor for Citizens, Evelyn Alonso, has also moved to the group of ‘not attached’, from where she has just supported the motion of censorship promoted by the Canary Coalition and the PP against the socialist mayor, Patricia Hernández, whom the Arrimadas party supported. Thanks to her vote, the mayor’s office has now passed into the hands of José Manuel Bermúdez (CC). Alonso’s behavior has earned her her expulsion from Ciudadanos.

The party leadership demanded that the two councilors, without success, comply with the Ethical and Financial Charter that sign all the charges at the beginning of their mandate, in which they promise to return their minutes “if they cause the party to drop due to any reason”.

Ciudadanos stresses that transfuguism “is a despicable practice, a form of corruption that in recent days has once again spilled over into important municipalities in our country, eroding the stability of governments at a delicate moment like the current one.”

The formation of Inés Arrimadas hopes that the new convocation of the Monitoring Committee of the Anti-Transfugal Pact “will allow the parties to tackle this scourge by updating and renewing that agreement to end the repeated breaches it accumulates.”

In addition, he believes that it is time to “promote legislative reforms to guarantee something essential: that the fugitive cannot be rewarded for being willing to alter the majority and that the parties cannot take advantage of this situation by buying wills, because the votes of the Citizens at the polls cannot be bought in the offices. ”

For its part, the PSOE, in its statement, agreed with Ciudadanos on the need to update and expand the Pact to “incorporate new parties”, and also to extend it to the regional and state level, not just the local one.

But in the meeting the socialists faced the PP representative to whom they conveyed their “most vigorous protest” for having supported the censure motion that they have brought about in Santa Cruz de Tenerife against the mayor of their party, Patricia Hernández, achieving that The Canary Islands coalition seizes with the baton thanks to the transfer of Citizens, Evelyn Alonso, “against what the citizens democratically decided”. “Since the PP has been a necessary cooperator for this trick”, the PSOE has demanded that the PP “put in place the necessary bases to reverse this situation as soon as possible.” “You cannot be at an anti-transfusion table and promote changes in municipalities at the same time,” they say.